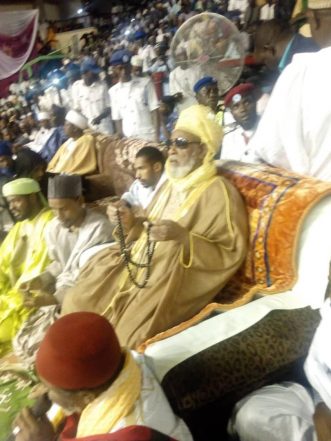 From Ahmad Saka Bauchi
A renowned Islamic Scholar Sheikh Dahiru Usman Bauchi has prayed for peace,security , socio economic and Political development in Nigeria.
Sheikh Dahiru organises a special prayers that includes glorifying the name of Allah recitation of the Holy Quran and special prayer s for the country annually as part of the celebration marking the Muslim calendar 1440 AH.
Thousands of Muslims from within and outside the country attended the special prayers in Bauchi.
Dahiru Bauchi Pray to Allah to save the country from the calamities of armed robbery,kidnappings,wars on insurgency, and to provide wealth ,development,progress and peaceful conduct of the 2019 general election.
The Scholar stressed the importance of glorifying the name of Allah and frequent recitation of kalimatush shahada ” Lailaha illallahu”  who ever recite it  if Allah put him inside its wall he would be protected and we pray to Allah to protect Nigeria.
In his message to Muslims in the World Sheikh Dahiru said “Intelligent Muslims not only lead lives of remembrance of Allah, but also require an understanding of it to maintain a spirit-filled life  to run the race Allah sets before us. Running the race is not possible without the remembrance of the Creator in the form of dhikr. The business of dhikr is vast. If you like, you can look at the meaning of the words of Allah, Oh you who believe! Remember Allah frequently ” with the Ulama of commentary, May Allah be pleased with them. Too often we are told how to do dhikr, but not why we do. Too often we are asked to chant it, but not to explore how it express our faith and our inward dimensions. “
Sheikh Dahiru said similar activities will be held in many states in the country second Friday of Almuharram it will be held at the palace of Emir of Lafiya in Nassarawa State, third Friday it will be held  at the palace of Emir of Dass, fourth Friday it will be held in Abuja National Mosque fourth Friday it will be held at the Palace of Emir of Katagum in Bauchi State other emir’s palace will also fix a date for their own.