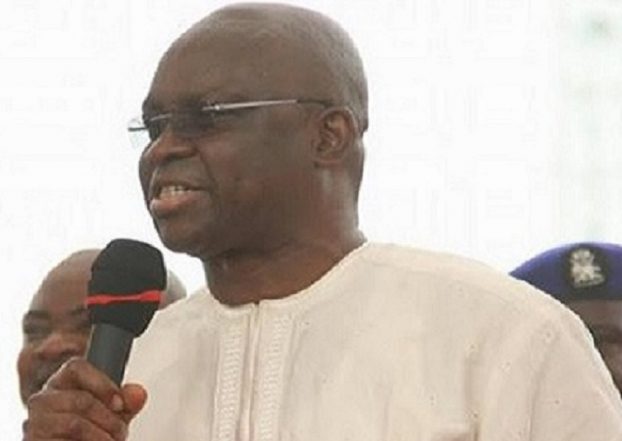 Ekiti State governor and Peoples Democratic Party (PDP) presidential
hopeful, Mr. Ayodele Fayose has urged the party in the Southwest to
forge a common front and present a single candidate for the national
chairmanship position.

He said; “going to the national convention in disunity will not serve
the collective interest of the party in the Southwest zone.”

Special Assistant to the governor on Public Communications and New
Media, Lere Olayinka, quoted Governor Fayose as making this call on
Monday,  in Lagos when he held a closed-door meeting with PDP national
chairmanship aspirants.

The meeting, which commenced around 9pm immediately after the arrival
of Chief George, who was accompanied by Chief Sarumi, among others,
lasted for over one hour.

Governor Fayose, who addressed  newsmen after the meeting, said he was
desirous of having the PDP in the Southwest go to the convention as
united and indivisible entity as it could not afford to go into the
exercise as a divided entity.

The governor said; “It will be difficult for me to be going around
soliciting support for all the chairmanship aspirants. It is when we
are able to present one common aspirant that I can be able to stand
behind such aspirant and campaign round the country.

“Going to the convention without cohesion would not speak well of the
Southwest zone and the purpose of today’s meeting is to start a
process of achieving a common front.”

He, however, said those at the meeting agreed that it should be an
ongoing exercise and an all inclusive one where all stakeholders would
be invited.

Also speaking, Alhaji Oladipo described Governor Fayose as the
rallying point for the party in Southwest being the only PDP governor
and the chairman, PDP Governors’ Forum in the country.

“He is a rallying point to make our position in the Southwest PDP
known in the coming convention.

“We endorse the calling of the meeting with all stakeholders in
attendance before the convention. It is our privilege to have him as
our governor and other stakeholders would be joining us before the
convention,” Alhaji Oladipo said.

On his part, Chief Ladoja, who said he had now become a full-fledged
PDP member, having obtained his party membership card, disclosed that
he would publicly declare his chairmanship ambition by the end of the
week.

Chief George, in his remark, expressed support for the meeting,
saying: “I also endorse the meeting and it shows that all hope is
lost.”

He said it should be clear that the Southwest PDP was not a rudderless
ship, exressing that at the end of the day, the intervention by
Governor Fayose would be a welcome development that would gladden the
heart of members.