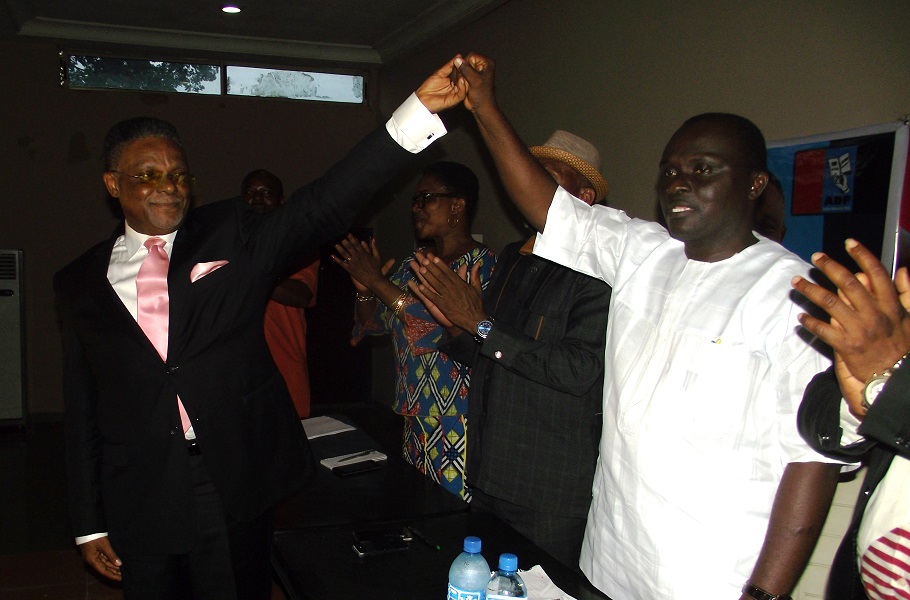 Mr. Okonkwo pulled a total number of 1062 votes out of 1072 votes in a direct primary conducted in three senatorial zones of Anambra State to emerge the winner, even as he is a sole aspirant for the party’s primary.

The National Secretary of ADP and returning officer, Dr. James Okoroma who declared the result of the primary at Grand Revaria Hotel & Suites venue of collection gave the breakdown: “Anambra North, 337 votes; Anambra Central 355 votes; and Anambra South 370 votes. Total number of vote cast in favour of the Aspirant is 1062 votes.”

“Distinguish Ladies and Gentlemen, we have only one candidate in this election probably because of the candidate’s solid and credible background other aspirant gives way and by the result submitted I hereby announced Mr. Ifeanyichukwu E. R. Okonkwo the winner, having certifies all the constitutional requirement of Action Democratic Party for his declaration as the candidate in the forthcoming Anambra State governorship election”.

“May I on behalf of the leadership and members of ADP may I invite Mr. Ifeanyichukwu Okonkwo to come forward. Members of our party, gentlemen of the press, officials of Independent Electoral Commission here present may I on behalf of the party present to you and the people of Anambra State Mr. Ifeanyichukwu Okonkwo who by the grace of God in the next three, four months will become the governor of this state.

“I call on all the people of Anambra State to embrace this credible alternative, Anambra cannot afford to go back to ‘Egypt’ the political scavengers and undertakers are here again, we are bringing to you a man who have accomplished in many fields, a man who are constant star in political firmament of Anambra State, a worthy son of Anambra state who have made contributions to the development of Anambra in particular and Nigeria in general, we have implicit confidence in him and believe he will take Anambra to the next level”.

While presenting him with certificate of return said the candidate will be ratified at the state congress of the party later following the constitution of ADP which “stipulate that elections shall be conducted by the direct primaries and at the end of the elections or primaries that the figures garnered in the field shall be ratified by the congress of the party at the national and state secretariat level”.

In his acceptance speech, Okonkwo thanked the members of the party for their act of patriotism in selecting him as their candidate to contest the Anambra State gubernatorial election, urging them to build a team for the task ahead while he promised to fight corruption in the way Nigerians have never seen.

“I accept this great honour of flying the flag of our Great Party (ADP) in the family contest of who should lead our dear State at this critical moment of renegotiating Nigeria in the position of Governor of Anambra State on November 18, 2017.

“By your wisdom in placing my humble self in this esteemed position, you have manifested the high premium you placed in whosoever that shall lead our dear State. Anambra State, in the present political climate of agitation and insecurity in the Nation, needs urgently a personality that is highly knowledgeable, humble, with integrity, fearless, a good team builder with a sense of justice”.

Okonkwo an anti-corruption crusader declared that the fight to take back “our community shall be total, and will be centered on Anti-Corruption / Impunity, Security, Human Rights, Law and Order”.

He said ADP administration in Anambra state, if elected would be anchored on following:

“No security Vote for Governor, No selling of communities land assets, Leadership by Example – Public Declaration of Assets and Liabilities.

Okonkwo said Awka Capital, as the Pivot of a One City-State will have full Local Government Autonomy; True Federalism / Devolution of Federal Powers to the States; and the negotiability of the Nigerian State; Executive Bill for an Annual Statutory Savings of 15% of Public Earnings in Bond.

He said ADP government would run an all-inclusive government made up of 50% women, 50% men (with 50% to the youths and 10% to the physically challenged).

“I am challenged to change the syndrome of individual prosperity amidst collective failure found in Ndigbo development profile and redesign of our physical development to incorporate heavy dominance of environmental protection, and improved sanitation in our Anambra communities.

As your Governor, Okonkwo said “I can re-invent the Igbo spirit of community and family value, strong educational foundation for the construction of our society intellectual superstructure required for the over-all development of Anambra State.”

He said that ADP administration would redesigning the Awka Capital Territory, Bye-Law to accord the indigenes a 20% allocation from the capital vote, to enable the Town Development Associations to maintain and retain the Igbo village culture heritage, which the massive urbanization has over-run.

Other things Action Democratic Party administration would do if elected includes;

The setting-up of an Investment Bank to support businesses; to spend more money in Education and payment of Grants to assist in infrastructure development in schools and will invest money in human capital development and higher pay for the labour force.

He said ADP government would place premium in the development of sports and sporting infrastructure in every Local Government and Communities in partnership with the private sector.

“We shall have a new justice sector reform that cases shall be heard by gazetting and sufficient funding of the judiciary.

“Development of Mass-Transit Hobs / Stations with the Private – Sector; overcoming our Erosion Challenges with Silos – Engineering Works; road construction designs that will Incorporate Pedestrians Walk-Ways and Bicycle Users; using gas to provide energy; using executive order to access our water ways”, while pledge to surrender “The ME”, idea, in me, for “The WE”.

Okonkwo stated that we are too serious chasing material things and leaving out the most important things – ‘education’, ‘good governance’ and ‘fight against corruption’ and ‘impunity.’

He promised that the Action Democratic Party in Anambra State will re-invent family-values, and shall put the citizens first. “I shall be your face in the fight against Party and general corruption / impunity, human rights protection and the rule of law.

ADP candidate, who charged Anambrians not to allow money bags to take their dream away, said “with Vision, Discipline, Wisdom, Courage, Compassion, Humility and a strong sense of justice for all – Anambra State shall be the winner!

I humbly urge my party members who understand how things work in the ‘unjust federal system of government’ in Nigeria that it is better to join a ‘political party’ where your strength lies. For me, the ADP is the best option for us to engage in the ‘re-negotiation’ of a new Nigeria. “There is no limit to what we can accomplish when we don’t care who gets the credit.”

While he pledged to conduct himself and his campaign both in character, style and commentary in the most honourable and gentlemanly fashion, said he is the model of a leader that believes in building other leaders.