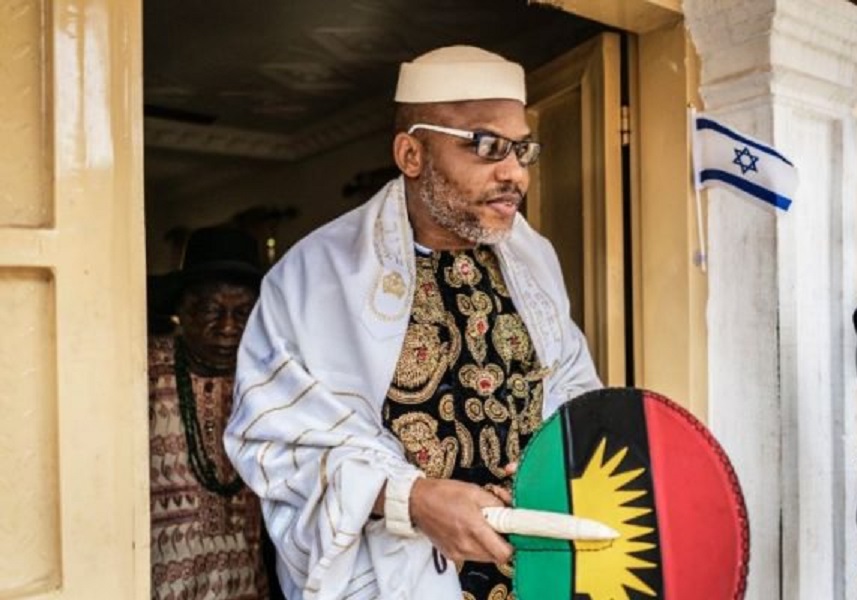 The Indigenous People Of Biafra IPOB Ihiala branch gathered in their numbers to condemn the continued illegal detention of Mr Benjamin Madubugwu who committed no crime against Nigeria state or any individual. It is quite painful that Nigeria Government and her judicial commission still holding Mr Benjamin Madubugwu and others like Chidiebere Onwudiwe, David Nwawuisi and Bright Chimezie Isinwa who has been granted unconditional bail with compensation of 5 million by the competent court of jurisdiction in Uyo Akwa Ibom State.

The continued detention of these men in DSS secret cell and kuje prison since two years now despite court order and pronouncements to release them proves that Nigeria have no law. Nevertheless, the people of Ihiala are not unaware that a call for self determination and referendum cannot be equates as a call for war in any civilized countries around the world. It is very uncalled for for few uneducated and uninformed Nigerians who rigorously attacking IPOB members of beating drums of war while they rightly know what referendum and self determination means. We want to make it categorically clear that IPOB under Nnamdi Kanu meant well for Biafrans and other ethnic nationalities in Nigeria who was lumped together and subjected to inhuman treatment and annihilation since 1914 by Fredrick Luguard. Since after the war Igbos and Biafrans have not seen a transparent and dedicated organization  like IPOB and such a leader like Mazi Nnamdi Kanu.

The call for referendum is a peaceful means of settling a burning issues bordering any civilised society, it has not been tagged as a way of confrontation any where around the world. Therefore we support the call for peaceful referendum so as to ascertain what actually the desire and minds of Biafra people. Also, the Anambra gubernatorial election boycott on 18th November this year is not a call for war rather it is a condition in which IPOB adopted as one of civil disobedience to persuade and register their grievances to the world and Nigeria Government and their allied to fix a date for referendum in Biafranland.

Finally are calling in total agreement and unity, with one unshakable voice the entire Indigenous People Of Biafra (IPOB) in Ihiala Zone and Ihiala indigenes to come out in solidarity with Mr.Benjamin Madubugwu and others to urged the well known individuals in Ihiala and it’s environs both Chiefs, Priests, politicians, kings and traditional rulers, religious men and women, elites and leaders of Ihiala L.G.A to stand up and be counted and with no further delay to call for unconditional release of Mr Benjamin Madubugwu. Also we maintain that in accordance with the call by IPOB Leader Mazi Nnamdi Kanu that Nigeria Government must give a date for referendum in Biafranland without further delay.