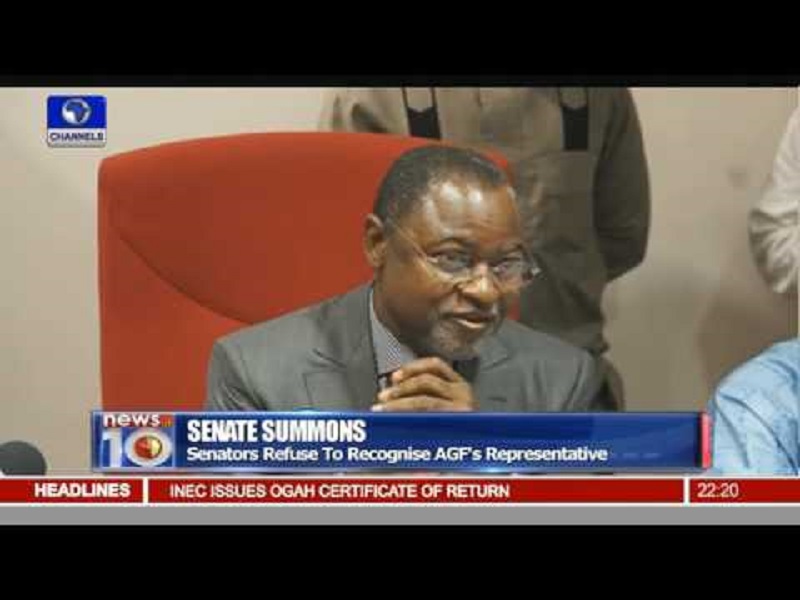 PRESS STATEMENT
[poll id=”29″]
…Beg for forgiveness
The immediate past Solicitor General of the Federation and Permanent Secretary, Federal Ministry of Justice, Mr. Taiwo Akinola Abidogun, has gracefully retired from the Federal Civil Service with effect from 24th of August, 2017.
According to a statement issued by Comrade Salihu Othman Isah, Special Adviser, Media and Publicity, Office of the Honourable Attorney General of the Federation and Minister of Justice, Abidogun, in a sent forth organized for him last Friday, expressed gratitude to the Honourable Attorney General of the Federation and Minister of Justice, Abubakar Malami, SAN for the cooperation and harmonious working relationship he extended to him for the period they worked together.
The retired Permanent Secretary also expressed happiness with his successor, Mr. Dayo Apata, a Director of Civil Litigation in the Ministry and a one-time Chief Judge of Ekiti State under the administration of Dr. Fayemi Kayode.
He described, “Ogbeni Apata my worthy successor”, noting that both of them have certain common record from appointment to retiring period.
“We were appointed into the service same year, got posting same day to work together in the same office” he emphasized.
He further stressed “if you are leaving a position, there is need for someone who is conversant with the terrain to take over because if you allow an outsider to take over, it may be disastrous.”
However, it was an apologetic Abidogun who in his final bow, said “It is great honour and privilege to have served you and my fatherland. If I had offended you in the course of my short service as Solicitor General, it is not intended but to the glory of the service. But nevertheless, I beg you to forgive me”.
It would be recalled that he joined the public service as pupil State Counsel on the 20th of January 1987 after a short private practice with Alade Adesode & Co. He revealed that he joined the service at the age of 30 years and could not serve up to 35 years because of age.
“I came into the service at the age of 30 years and served only 30 years not 35 years. I am retiring today after attaining the mandatory retirement age of 60 years”.
He narrated how he navigated his ways through the service years noting that in some circumstances, he had to undertake night journeys to save cost and meet up with the time for cases he had to defend at the Law Courts. He is thankful to God for seeing him through all these journeys without involving in an accident.
The Honourable Attorney General of the Federation and Minister of Justice, Abubakar Malami, SAN was represented at the occasion by Mr. Sylvester Imanobhe, Special Assistant to President in the Office of the AGF.
Abidogun , an indigene of Awe in Oyo state was born at Enugu State on the 24th of August 1957. He started his Primary Education at W.T.C practicing school in Enugu between1962 to 1966 because of the looming civil war, the family relocated to Lagos necessitating his completion of primary school at Ladi Lak Institute, Yaba Lagos between 1967 and 1969.
The retired SGF later enrolled into Baptist Academy, Shepherd Hill where he obtained WASC division 11 certificate in 1975. He bagged BA (Hons.) degree in English and Philosophy from University of Lagos in 1980. Based on his desire to read Law, he sought and gained admission in the same Institution to study law and acquired LLB. (Hons.) in1984. As a prepared mind, he proceeded to the Nigerian Law School and where he obtained his Barrister at Law certificate ( BL) on 21st of August 1985.
The incoming Solicitor General of the Federation and Permanent Federal Ministry of Justice, Mr. Dayo Apata in his goodwill message described civil service as long distance journey with its ups and downs.
According o him, “The service cannot only be said to be a stage, but must be described also as a journey which is like passing through a road network where you must contend with potholes, bend, bumps, traffic enforcement officers etc.”
He expressed gratitude to God for allowing his predecessor to pass through the journey and have cause to smile.
The Director, Human Resources Management in the Ministry, Dr. Maria Ogar, Director International and Comparative Law, Mrs. Stella Anukam, former Director Public Prosecution of the Federation, Mr. Akin Akintewe amongst others, all poured encomium on the retired Solicitor General of the Federation.
Highlight of the event was cutting of birthday cake, which was jointly done by the chief celebrant and his lovely wife Mrs. Olufunke Abidogun.