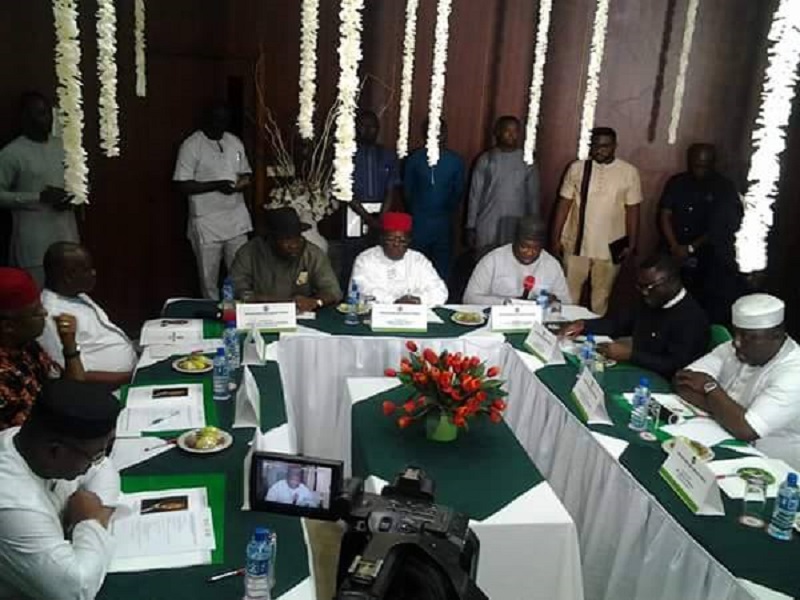 Governors of the South-East and South-South states held a crucial meeting in Enugu on Sunday night.

Our correspondent learnt that the meeting, which held at Nike Lake Resort, Enugu, was informed by the ongoing agitation for Biafra in parts of the two zones, as well as the campaign for restructuring.

The meeting came on the heels of an earlier meeting between the South-East governors and some Igbo leaders, including the leadership of the Ohanaeze Ndigbo and the South-East National Assembly Caucus, where they declared their support for a ‘united Nigeria.’

The Enugu State Governor, Ifeanyi Ugwuanyi, who addressed the opening session of the meeting on Sunday night, stressed the need for cooperation between the South-East and the South-South.

Ugwuanyi noted that the two zones “are joined by tradition, geography and brotherhood, and also by common challenges.”

He noted that Igbo leaders had already met and agreed “on a restructured Nigeria, where peace, love, equity and opportunities are paramount, regardless of creed, ethnicity, gender and political affiliations.”

“It is against this background, therefore, that the meeting of the South-East and the South-South, becomes important,” the governor added.

Ugwuanyi, who lamented common infrastructural challenges in the two geopolitical zones, said the South-East and South-South would thrive through mutual cooperation.

According to him, the collaboration between the South-East and South-South would give the two zones more influence at the federal level.

“I believe that a sustained South-East and South-South cooperation would foster and accelerate competitive development.

“Through inter-regional cooperation, we will be able to speak with one voice and form a greater political capital that will influence the Federal Government,” he said.

The governor stressed the need for the inclusion of the eastern rail corridor, which runs through the South-South and South-East, in the proposed Chinese EXIM Bank loan.

The meeting, which entered a closed session as of the time of filing this report, had nearly all the governors in the two zones in attendance.

Willie Obiano of Anambra State was represented by his deputy, Nkem Okeke, while

Godwin Obaseki, (Edo) and Ifeanyi Okowa of Delta State, have not arrived as of the time of filing this report.