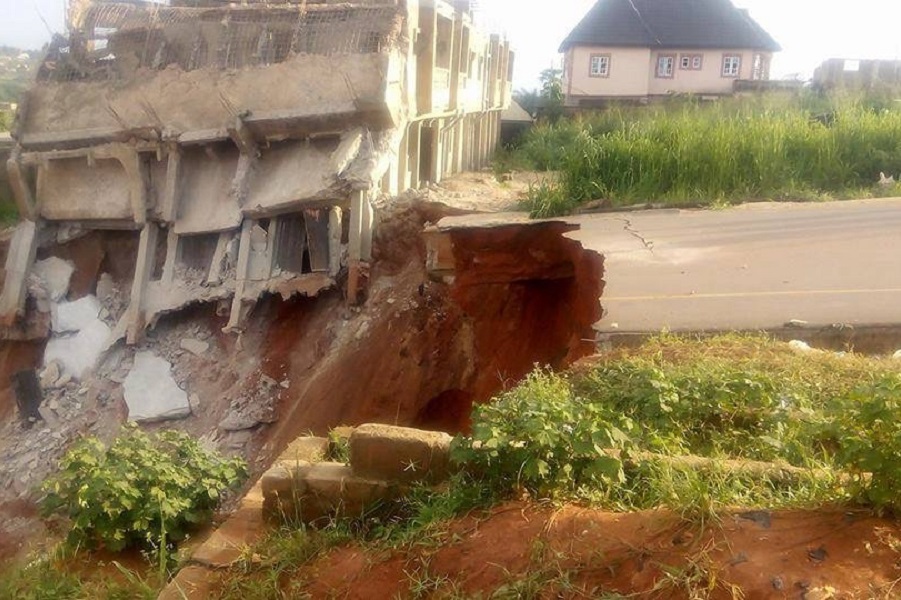 The devastating effects of climate change is being compounded by environmental blight and degradation. In the south-eastern part of Nigeria, especially Anambra State, the situation has worsened with growing gully erosion. At the last count, there are over 1,000 active erosion sites in Anambra State, most of which are yet to receive the aggressive remediation so desperately needed.

The season of torrential rainfall which has set in and usually peaks in August, will further compound the prevailing challenges. The season is usually characterized by heavy flooding, and devastating erosion as the aftermath. Most erosion-affected communities in Anambra, like Obosi, feel neglected.

Reacting to the situation, Mr. Oseloka H. Obaze, a frontline aspirant in the 18 November 2017 governorship poll in Anambra State, noted that the heavy presence of active erosion sites in the state is being further compounded by human factor. Speaking in Obosi, Anambra State, over the weekend, Obaze said that while flooding is inevitable after heavy rainfalls, a combination of policy failure, poor infrastructure and planning, lax enforcement, attitude of the people combine to exacerbate the situation.

According to Obaze, who is also the immediate-past Secretary to the Government of Anambra State, “Heavy rainfall may have devastating effect, but this is worsened, when policy and enforcement mechanism fail and people are allowed to build on waterways, flood channels, and old river plains. As we blame the rains, we must also blame failed public policies; failed enforcement regimes and the people too for flooding disasters.”

As regards possible remedial measures, Obaze said, “We must be conscious of climate change and its overall negative impact on our environment. We must learn not dispose refuse indiscriminately and not to cut down trees unnecessarily; we must also learn to plant grass and trees in order to protect the soil from the direct impact of rain.”

The public policy expert called on concerned authorities to be proactive in its drainage and waste disposal methods. According to him, the present system is inadequate and far too inefficient. He advised that population density, waste water volume, rain water volume and solid waste volume be considered by policymakers in order to provide adequate drainage and refuse disposal systems.

On the plight of people displaced by erosion or those residing in high risk erosion prone areas, Obaze said “public safety requires identification and evacuation of buildings in erosion prone zone and fault lines.” He opined that government has an obligation to mark buildings on the precipice as “inhabitable”; and if need be, provide interim alternative accommodation for affected residents as part of its social welfare scheme.

Recalling that last May, the World Bank made available $500 million for the Nigeria Erosion and Watershed Management Project (NEWMAP), Obaze said the concern always was whether designated projects were needs-based, project-driven or transaction-driven. “I’ve seen people who are totally incompetent and without capacity or know-how get contracts to tackle erosion. That just won’t work.”

Finally, Obaze called for more transparency and professionalism in the management of resources meant to tackle the erosion menace. “The handling of the ecological fund has been largely opaque, both at the federal and state levels, thus the likelihood for abuse is high.”