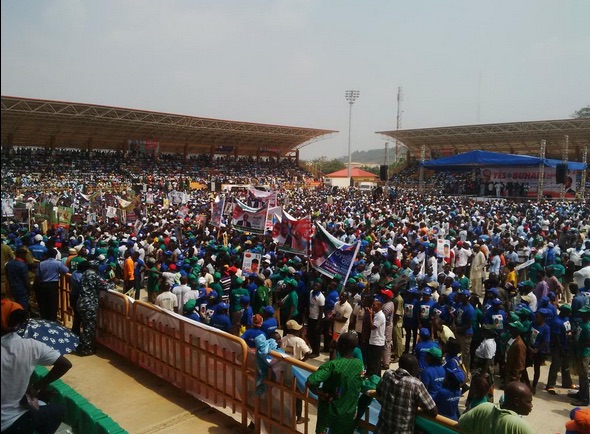 In the past few days, the news stories emanating from Lagos State, particularly on the primary election organised by the All Progressives Congress, are unsettling and disturbing.

At the risk of being misunderstood, I wish to state that I am concerned about the matter due to two fundamental reasons.

Firstly, as a member of the APC, I am concerned the state chapter of the party has not portrayed APC in good light. It is clear the APC primary election in Lagos State was not properly handled. I believe the uprising, protests and deaths were avoidable. The APC is a party that is well footed and rooted on the foundation of internal democracy. If the Lagos State chapter of our party had adhered strictly to the value the APC places on internal democracy, the protests and deaths would not have occurred.

Secondly, the ugly development is coming at a time our country is commemorating Democracy. Certainly, there are many ways to mark and celebrate democracy, but what was reported to have happened at the Lagos APC primary election is not one of them. It is pure mockery of democracy.

Before the primary election, the Lagos Democratic Forum (LDF) had warned against imposition and impunity. The Forum specifically accused former governor Bola Tinubu of issuing an undemocratic directive “to the party rank-and-file to jettison party primaries for the forthcoming local government elections in the State”. The Forum concluded that such directive contradicted the provisions of APC’s constitution. The aftermath of the primary election has shown that the accused either disregarded the warning or, perhaps, the accused is not interested in what the constitution of APC has stipulated about internal democracy.

Meanwhile, the LDF was not alone and lonely on the warning against imposition. Dr Muiz Banire, SAN, the National Legal Adviser of All Progressives Congress, APC, was a worthy ally. He warned that the LG primaries should not be manipulated in favour of certain aspirants. He kicked against the decision of the Lagos State chapter to conduct primaries election for all the aspirants in a centralized location. He declared that the decision was alien to the party and not in the APC constitution. His warnings fell on deaf ears.

Against the warnings of the wise men, the primary election was conducted in such an undemocratic manner that led to an outbreak of widespread violence. The News Agency of Nigeria (NAN) reported that some aggrieved party supporters engaged one another in a free-for-all midway into the election, smashing ballot boxes over allegations of imposition of candidates at the election. People were killed. Public peace and order have been disrupted. Tension is reported to have enveloped many parts of the State.

On the other hand, It remains a tough task to reconcile the ugly development emanating from Lagos State with the message issued on Democracy Day by the Leader of APC in the State, Senator Bola Tinubu. He warned Nigerians to be vigilant and wary of anti-democratic forces. He enjoined to keep and nurture democracy, nor for the sake of democracy but for the sake of the country.

This is the same man that has been fingered to be at the centre of the political crises that has led to protests and deaths. He enjoined Nigerians to nurture democracy while reported to have taken deliberate actions to manipulate and kill democracy in Lagos State. Without any iota of doubt, it is now clear that desperate men in uniform are not the only threat to democracy, the demagogue in progressive gown is also a threat to democracy.

Getting inspiration from the title of late America Singer Barry White’s number one R&B single in the album, “The Icon Is Love”, it is time to tell political leaders to “Practice What You Preach”.

The government, the Party and political leaders in the State need to take full responsibility for all that transpired before, during and after the botched primary election. The people are aggrieved, the people are mourning, yet, there is dead silence from the Party and political leaders. The Party stands to lose more if it continues to pretend like nothing has happened. People have not been killed, and their families deserve some forms of consolation and commiseration.

Conclusively, there is need for concerted efforts and interventions to ease the reported tension in some parts of Lagos State. This is not one that can be done only by security agencies. The core issue of the agitations and protests should be addressed. Therefore, It will not be out of place for the National leadership of the APC to intervene and restore normalcy because the political leaders have not only desecrated democratic ethos, they have also excreted on democratic tenets.

Sulyman Buhari is the publicity secretary of All Progressives Congress in Kwara State.