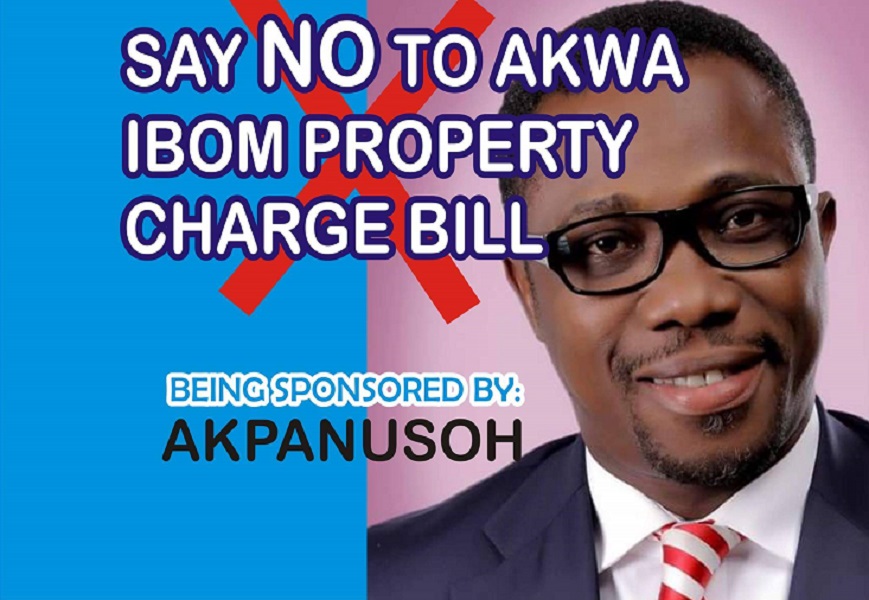 Fellow Akwa Ibomites, I bring you greetings in the name of solidarity.

As you lie in your closet, your future and that of your generations are being traded by evil men who came to power through day light robbery of the ballot.

These are men who do not consider your plights, even in the midst of the biting economy on Nigerians.

It took Lagos years to be developed, but today, Akwa Ibom wants to be equated with Lagos state.

The billions of Naira accrued to the state since the administration of Udom Emmanuel, has been unaccounted for.

The 14.5 billion Naira Paris debt refund, has been a secret between the Governor and the House of Assembly.

No one hears about the internally generated revenue of the state.

These are the facts:

Usoro Akpanusoh, who is representing Esit Eket/Ibeno in the state House of Assembly, was given a bill called property charge bill, to take to the house. The bill did not get the attention of some of the house members, like Mark Esset,(Nsit Atai), Aniekan Uko, (Ibesikpo) Aniekan Bassey (Uruan), Nse Essien, (Onna).

Since they first rejected the bill when Akpanusoh brought it last year, he was encouraged by Udom Emmanuel to push it this year. Akpanusoh was promised percentage for the tax which will be paid by house owners to the tax consultant, and in 2017, he brought the bill to the house and was rejected in  February this year.

The rejection of that property charge bill by the house members i mentioned above, led to the removal of Nse Essien as Deputy Chief Whip, and also the removal of Aniekan Bassey as the House Leader, which they were replaced by stooges who will do the bidding of the Governor.

Onofiok Luke, who presides over the House, seems a willing tool in the hands of the Governor to get the bill passed at all cost.

The property charge bill when passed, will make you pay tax on your land and houses you built from your sweat without the government’s assistance.

Failure to pay, the tax will increase by 30%, thereafter, increase to 100%, after this,  you still cannot pay, the government will take over your building and manage it for you.

The bill also states that the Governor has the power to exempt whoever he wants, from not paying the tax. Invariably, if Udom Emmanuel does not like your face, you may pay more. Or if you don’t belong to his political party, or you oppose him, you will pay more.

The bill is meant to keep the rich richer.

Churches are excluded from paying this tax.

If you see any youth supporting the bill, I can tell you strongly that they are on the payroll of at least one political office holder.

In February, 2017, when we held a protest against the House of Assembly, the leadership of the Assembly gave me assurances to call off the protest that the bill will be discarded. But yesterday, characteristically of politicians, their aim is to get money from Udom Emmanuel and pass the bill.

They gathered yesterday, in a stage managed public hearing, to do the Governor’s bidding, gathered their cronies to come. Like political vultures, they merried in anticipation of its passage.

At this point, the only language they understand is resistance.

Some cannot speak out.

From page 1 to 10 of the bill is satanic. Only men with evil hearts can propose such bill.

Akpanusoh cannot move a motion or fight for the relocation of mobil headquarters to Akwa Ibom, neither has he moved for the rehabilitation of the IBB road that is impassable when it rains. It is a pity, that he has surrendered himself to be used against the people of Akwa Ibom State.

May these writings serve as a memorial in the state, that in future, when wicked men from Akwa Ibom will be called, his likes and the members of the 6th Assembly will be boldly written.

May the cry of the poor masses, those languishing in the villages without food, yet Akpanusoh and Udom Emmanuel wants them to be taxed, may their cries reach the door steps of every politician or youths supporting the evil bill.

This is not a political party affair, this is the future of Akwa Ibom.

Politics will come and go, but Akwa Ibom will remain.

Has Akpanusoh asked where the members of the past house of Assembly in the state are today?

Stand and be counted. Say #Notopropertychargebill

No to Akpanusoh and his co travellers in the Assembly.

Keep your fingers crossed, for we will conquer them like the children of Israel.

May posterity be our Judge.