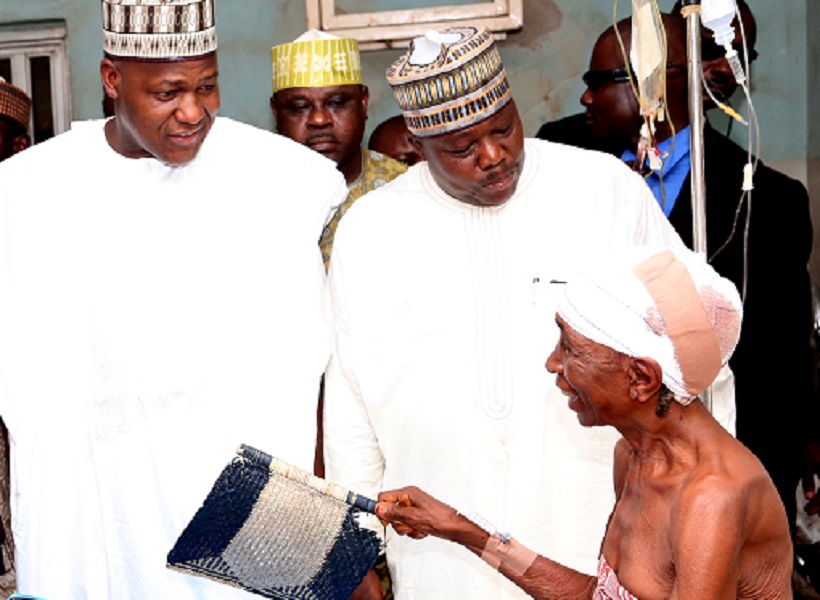 Advertisement
By Yahaya Audu,  Bauchi
The management of Abubakar Tafawa Balewa University Teaching Hospital Bauchi (ATBUTH) has disbursed the N3.7 million donated by the Speaker House of Representatives, Yakubu Dogara and other lawmakers to assist some patients of the hospital.
Dogara and other lawmakers announced the donation on May 5th,2017 when he visited the hospital along side with other lawmakers to see patients on admission with various ailments in some of the wards.
The Speaker made a personal donation of N1,266,600 to five patients while other lawmakers including senator Ali Wakili and others who accompanied him donated N2,500,000 to other patients.
Speaking during the disbursement of the monies to the patients, the Chairman Medical Advisory Committee of the hospital, Dr Abdu Gwalabe disclosed that the monies promised by Dogara and other lawmakers was received by the management and will be given to the beneficiaries.
According to him, the five patients received the sum of N1,266,600 according to what‎ the speaker promised them.
He said a girl who is undergoing Chemotherapy for Cancer received N500,000, another patient with Surgical Fracture received N300,000 while another one with a broken leg received N200,000.
Another girl undergoing Dialysis was given N66,600 and a Police Officer with gunshot wound received N200,000.
Dr Gwalabe further informed that the N2,500,000 were shared among 84 other patient‎s.
Four other patients with Dialysis, Abdominal Tuberculosis, Surgery and another Dialysis patient were given N60,000, N50,000, N70,000 and N80,000 respectively.
The balance was later shared among the ‎other patients with each receiving a litle over N26,000 while the balance of a little over N5000 was later given to another patient who was not initially on the list.
One of the beneficiaries, Mohammed who received the donation on behalf of her sick daughter‎ thank Dogara and his friends for the donation.
She also commended the management of ATBUTH for making sure that the monies were given to the real beneficiaries.