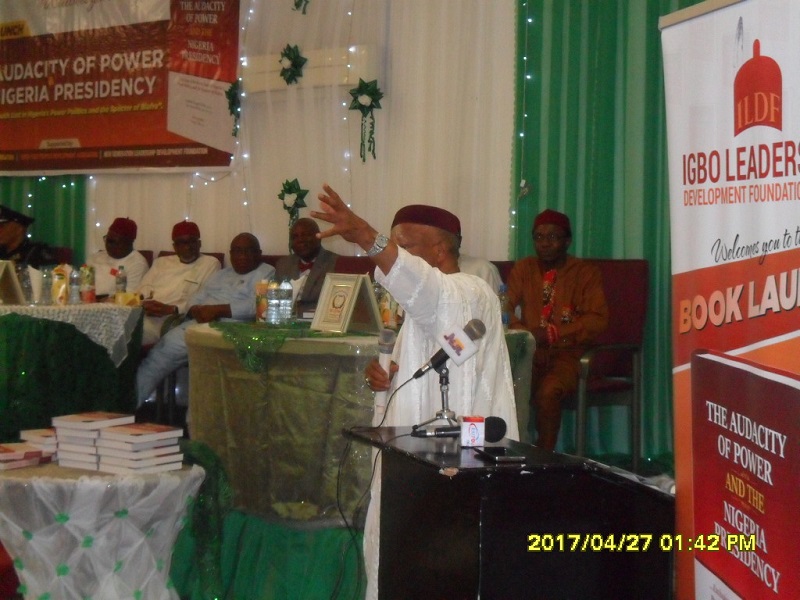 Senator Ken Nnamani who had served as the President of the Senate of Nigeria from 2005 to 2007 representing the constituency of Enugu East senatorial district – arrived the launch of the book “The Audacity of Power and the Nigeria Presidency” authored by Godwin Udibe and Law Mefor at 1:42pm following an earlier appearance at an All Progressive Congress [APC] book launch where Alhaji Abubakar Atiku was the keynote speaker.

As the former Senate president entered, he was quickly recognized. Within minutes he was handed the microphone. As he began to speak, the noise decibel began to simultaneously rise from idle murmurings into a mild but sustained booing from sections of the hall in what appeared a rejection/disapproval from the audience. As it grew louder, the former Senate President became visibly angry. He threw a tantrum. He threatened to walk out of the event if the ‘noise’ was not controlled by the organizers of the event. It was quickly controlled.

Nnamani began his address by talking about the APC book. He spent the first 19minutes of his 43minutes speech discussing the APC book which Atiku had launched that the other occasion.

As he veered towards the subject at hand, the former Senate President became more visibly angry. “Those of you agitating are to be ashamed of yourselves”, he fired while adding that “people are too free, that’s why they commit suicides”.

The former Senate President, a recent decampee from the Peoples Democratic Party [PDP] to the ruling party, expressed disaffection with the agitation for self-independence and/or Biafra. He called the agitators “foolish” and the idea a “fantasy”. He warned all agitators “to stop agitation and go find jobs”.

“Agitation will not help us. I am not agitating for Biafra. I don’t support it”, thundered the former senate president as he explained that he joined the APC to help the people of the South East, and not for personal interest. “I have no ambition to contest for any political post. It is to help get the south east the due share in the APC government.”

The former Senate president ended his address with a donation of N500,000. He collected two copies of the book.