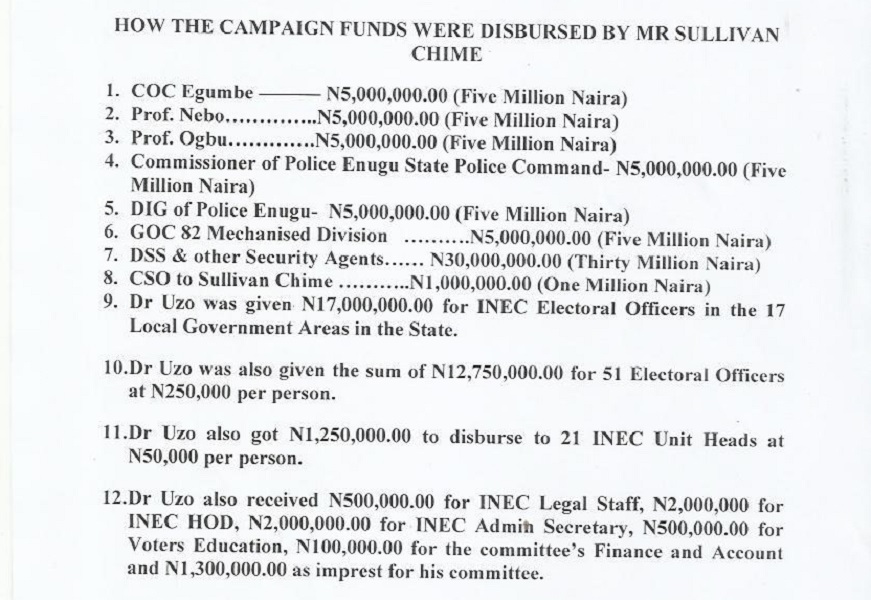 A legal luminary Chief Mike Ozekhome, SAN has asked the Acting chairman of the Economic and Financial Crimes Commission (EFCC), Ibrahim Magu to take over the ongoing investigation into how the N450 million sent to Enugu state by the Peoples Democratic Party (PDP) National headquarters during the 2015 Presidential election was disbursed.

The constitutional lawyer who is counsel to the former commissioner to the Ex-governor Sullivan Chime on Special Duties and the Secretary of the Goodluck Jonathan Campaign Committee in Enugu state during the 2015 Presidential election, Hon. Rita Mbah also expressed dismay at the handling of the matter by the Enugu Zonal office of the commission.

The said fund has since become a subject of investigation by the EFCC as it was said to be part of the $2.1 billion meant for the purchase of arms to prosecute the fight against Boko Haram but was allegedly diverted.

But in a nine-page letter to Magu entitled “A Clear Case of Victimization, Perversion of Justice, illegal and unlawful detention,  palpable bias, distorted and compromised investigation: Our Repressed Ms, Mbah” Ozekhome said it had become necessary for the matter to be transferred from Enugu to Abuja in view of the obvious compromise displayed by the officers in Enugu. 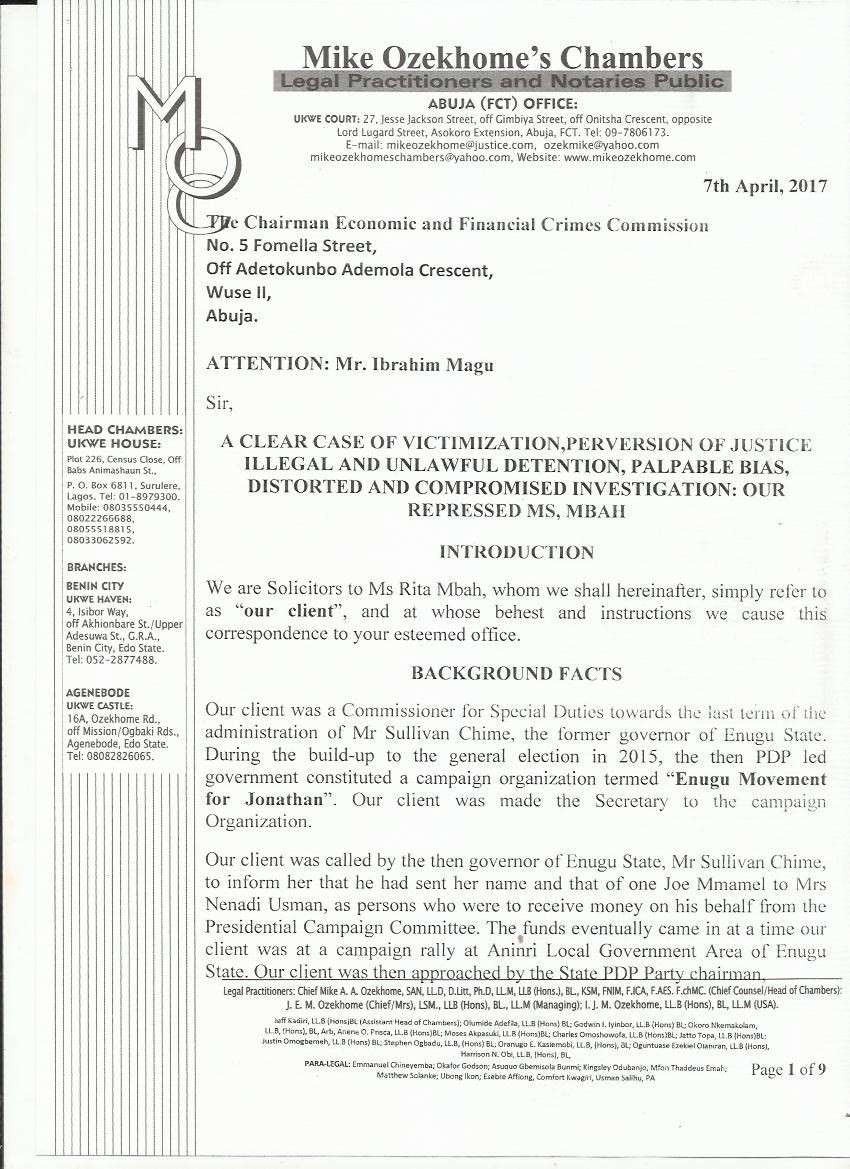 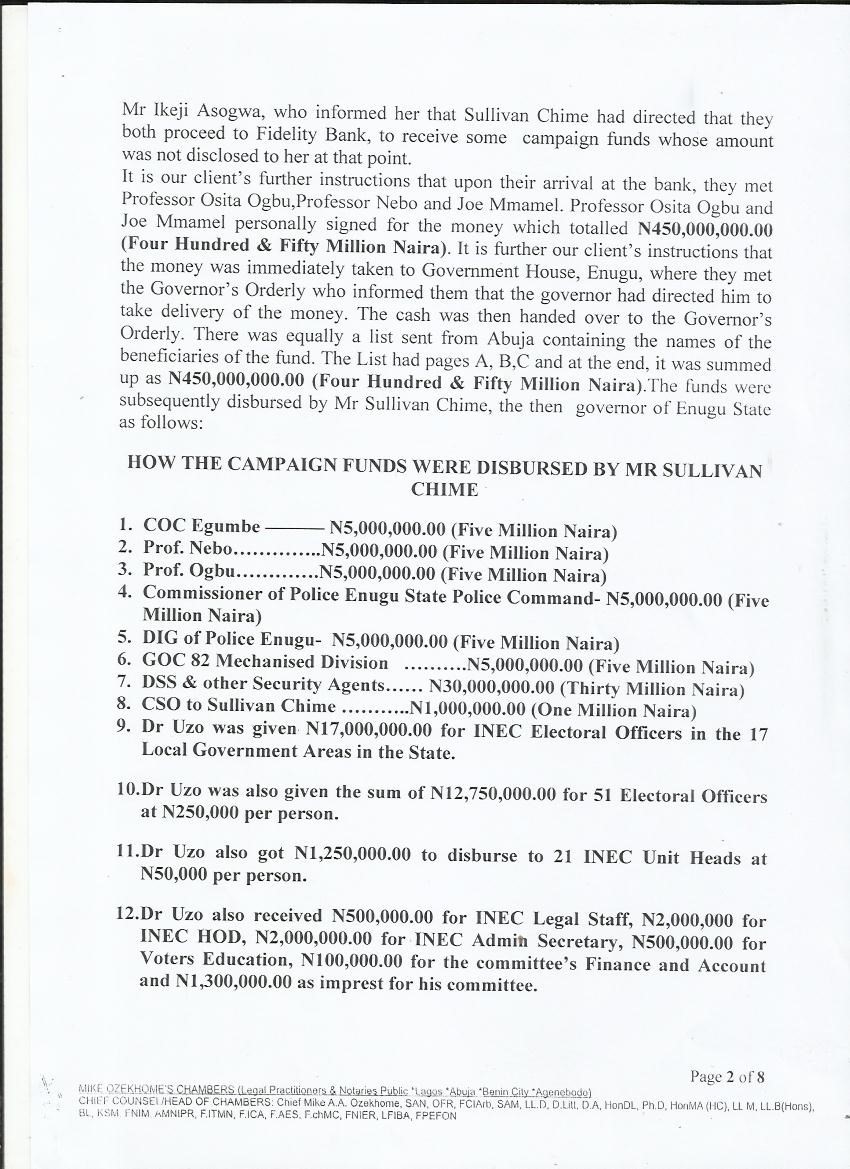 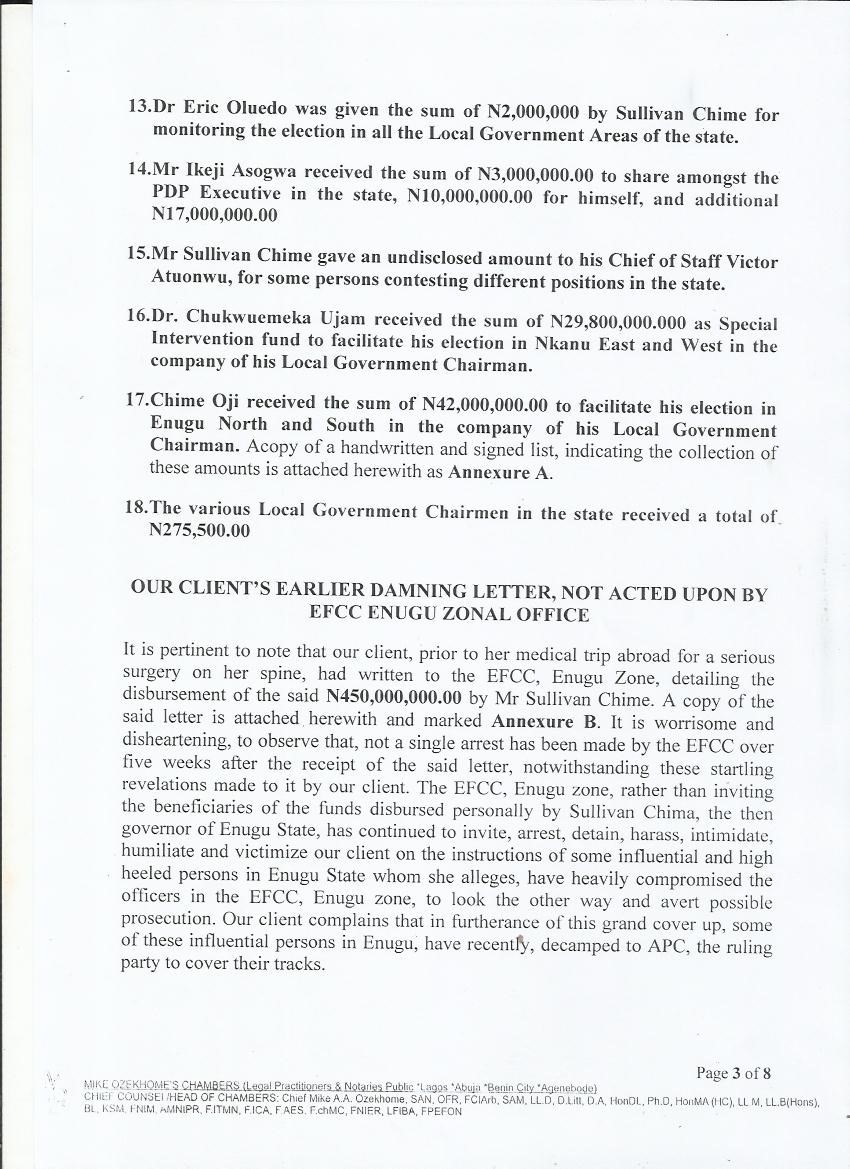 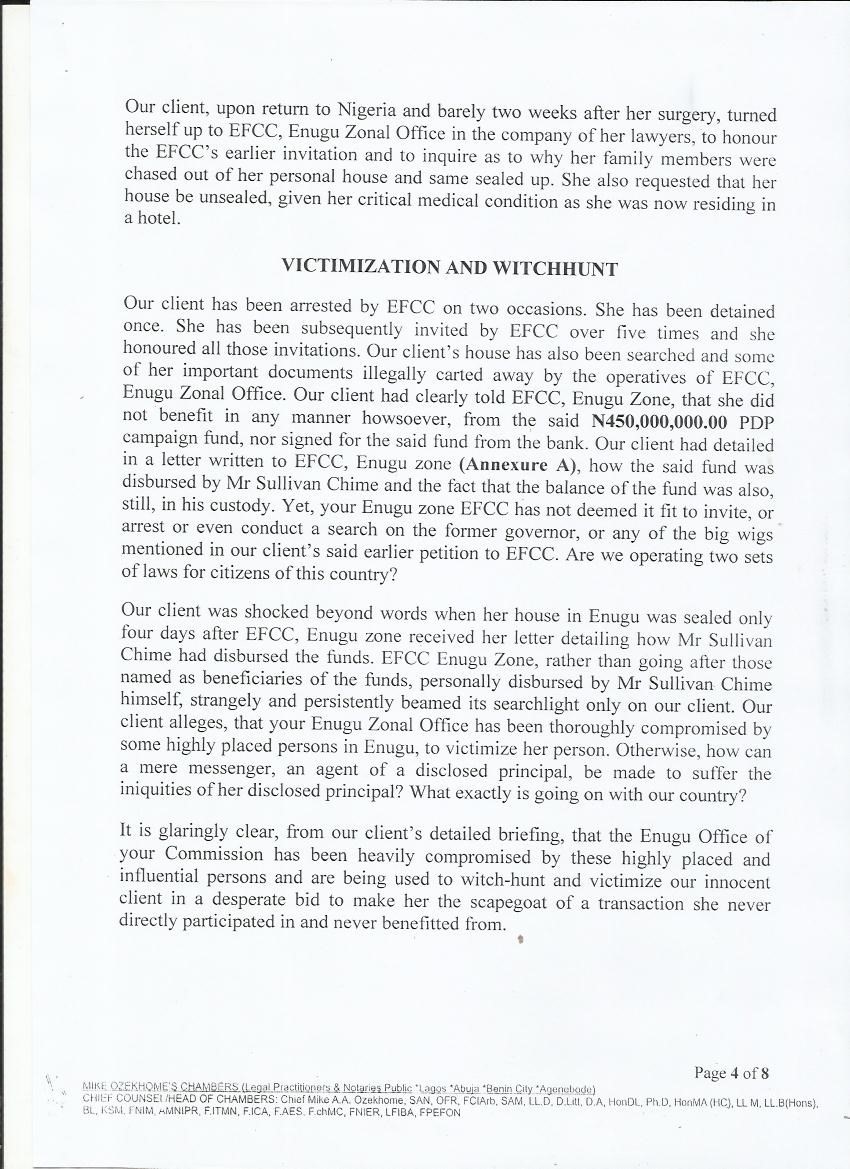 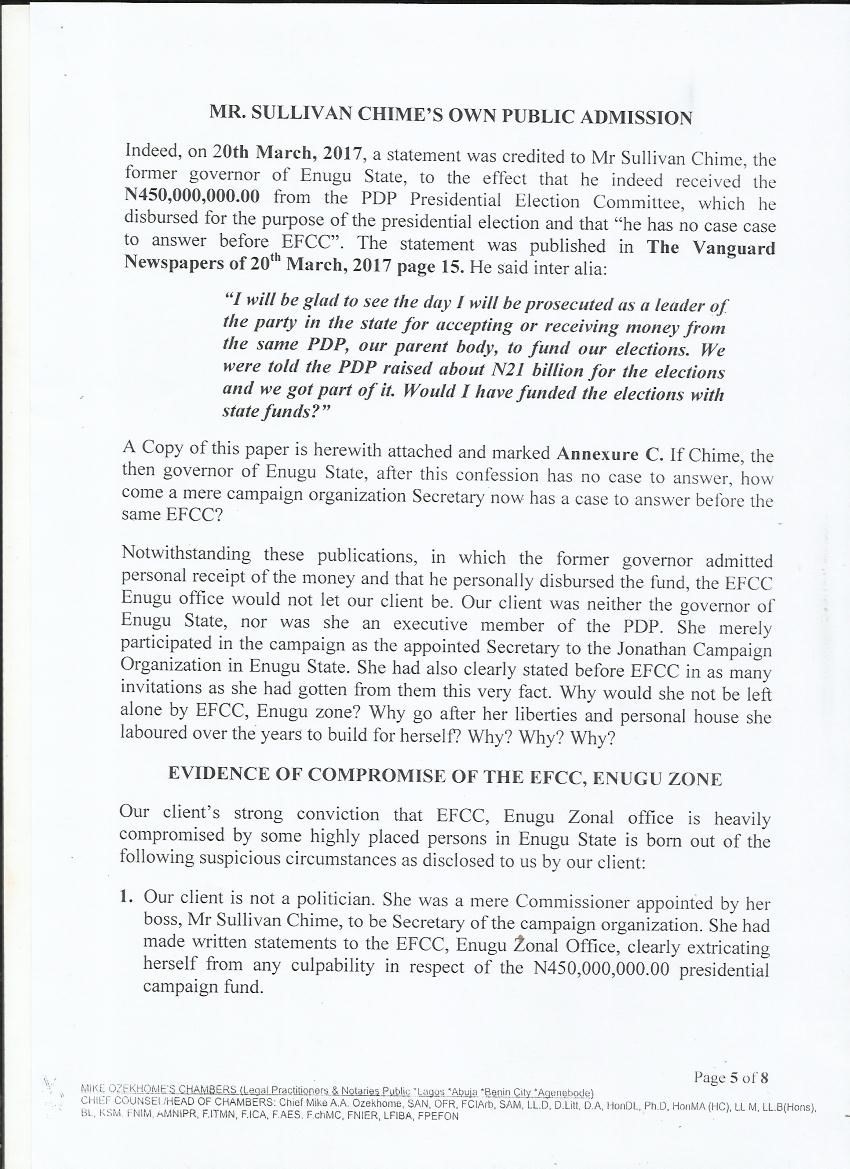 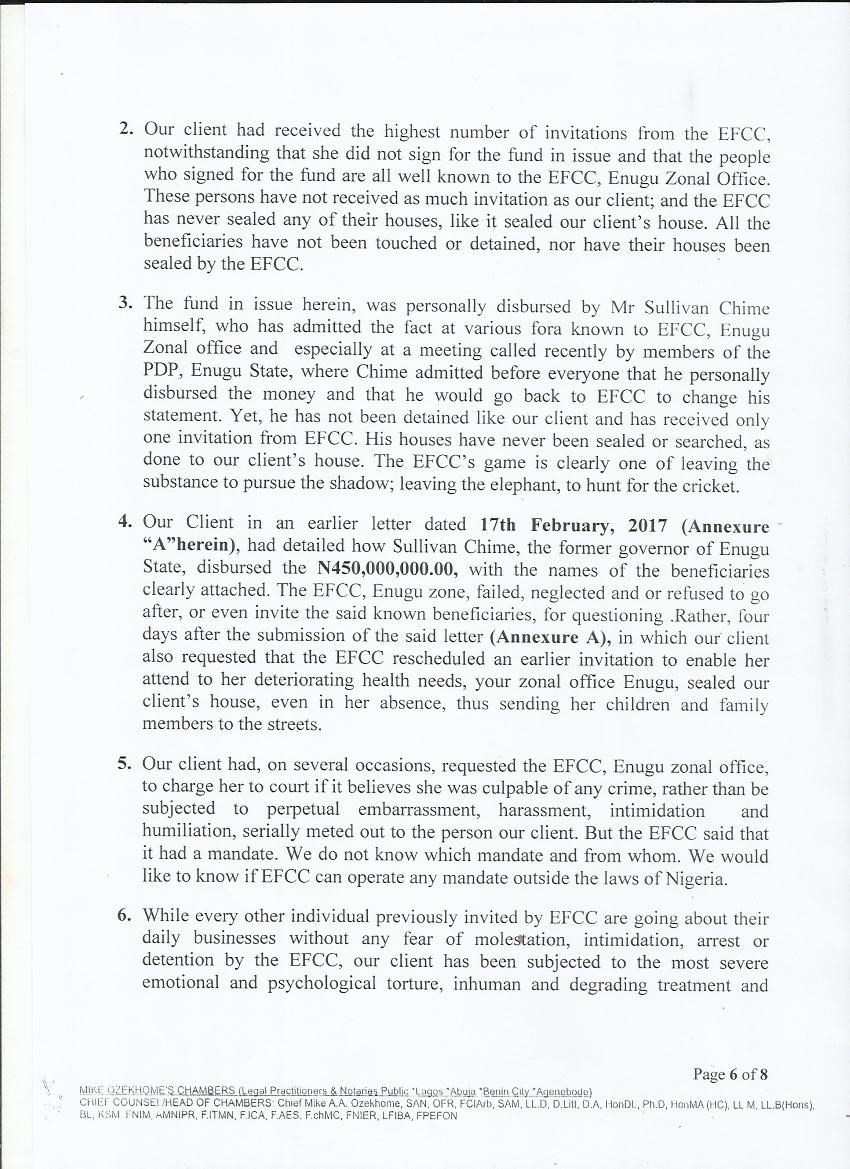 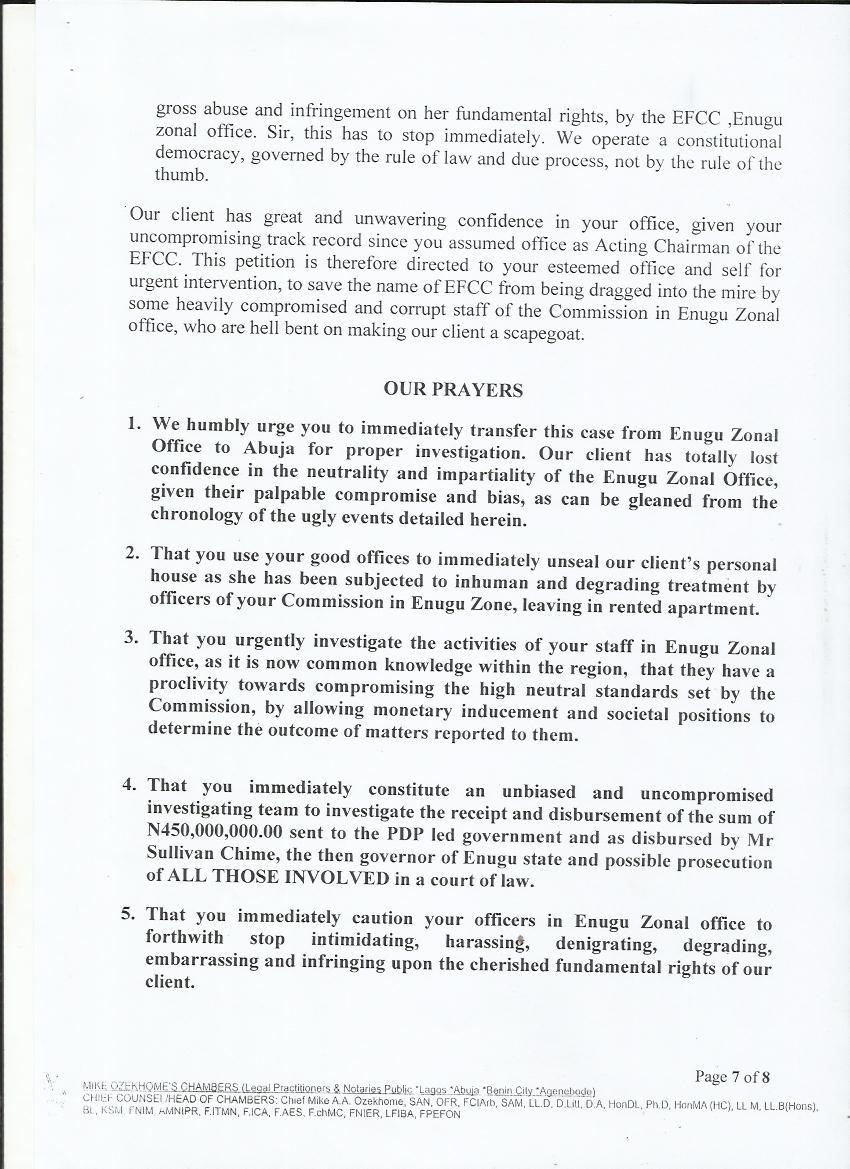 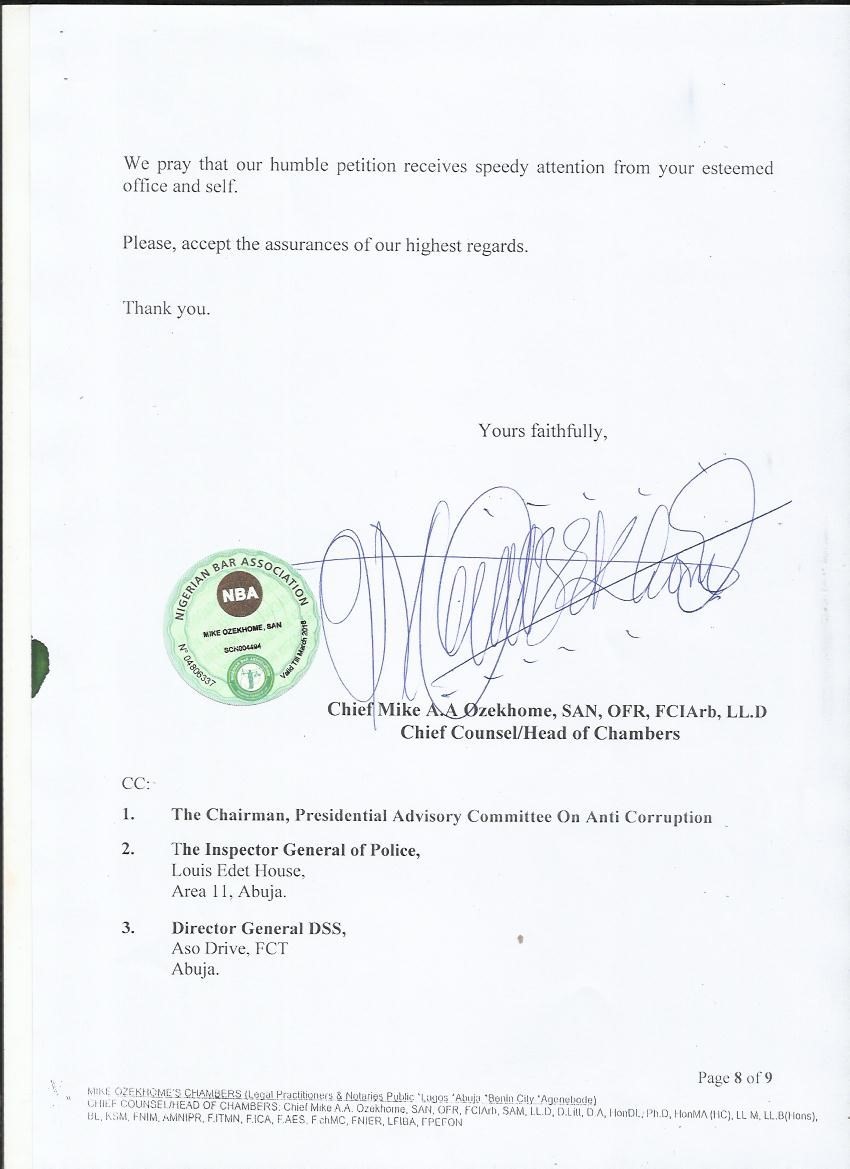 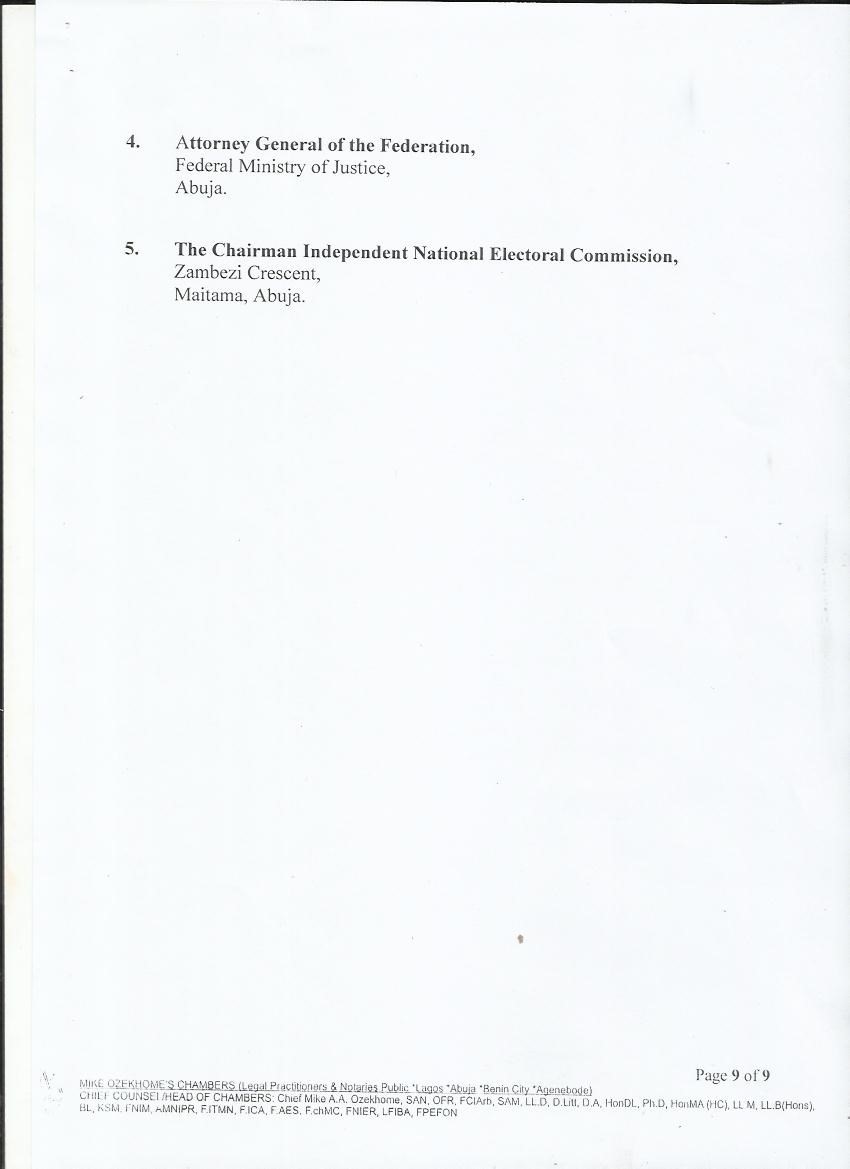 He asked Magu to immediately constitute an unbiased and uncompromised investigating team to investigate the receipt and disbursement of the fund, with the intent to possibly prosecute former governor Sullivan Chime who allegedly disbursed the money and all others involved.

According to him, developments since the commencement of the investigation in Enugu had shown that justice will eventually not be served as his client had lost confidence in the neutrality and impartiality of the Zonal office “given their palpable compromise and bias as can be gleaned from the chronology of the ugly events detailed in the letter”.

He said the commission in Enugu rather than go after substance had settled for the shadow as it continued to intimidate, harass, denigrate, degrade, embarrass and infringe upon the fundamental rights of his client.

Giving further details as to the reason for his conclusions, Ozekhome who copied the letter to the chairman, Presidential Advisory Committee on Anti-Corruption,  the Inspector General of Police,  Director General of DSS, Attorney General of the Federation and Chairman of the Independent National Electoral Commission (INEC) said despite the revelation as to how the said fund was allegedly disbursed by the former  governor, nobody other than his client, a mere secretary during the campaign had consistently been harrased by the commission.

According to the letter which detailed how the money was allegedly disbursed, former Minister of Power, Prof Chinedu Nebo, the chairman of the campaign team, Charles Egungbe and Prof Osita Ogbu received N5 million each, same with the then Commissioner of Police, GOC 82 Division and one DIG of police.

Also, the DSS and other security agents as well as the Chief Security Officer to the then governor got N31 million, while one Dr Festus Uzor got N38.3 million for distribution to officers of INEC. Chairmen of the 17 councils of the state also allegedly received about N275.5 million.

Other party leaders including, Ikeje Asogwa, Eric Oluedo, Emeka Ujam and one Chime Oji, among others equally received different sums of money from the then governor.

He said despite the information as was provided by Mbah, the EFCC had not even invited the persons let alone arrest or detain them.

“Rather than invite them, the commission has continued to invite, arrest, detain, harass, intimidate, humiliate and victimise our client on the instructions of some influential and high heeled persons in Enugu state whom Mbah alleges have heavily compromised the officers in the EFCC, Enugu zone to look the other way and avert possible prosecution.

“Our client complains that in furtherance of this grand cover up, some of these influential persons in Enugu have recently decamped to APC to cover up their tracks. Our client, upon return to Nigeria and barely two weeks after her surgery, turned herself up to EFCC, Enugu Zonal office to honour the EFCC’s earlier invitation and to inquire as to why her family members were chased out of her personal house and same sealed up. She requested that her house be unsealed, given her critical medical condition as she was now residing in hotel”.

“Our client has been arrested by EFCC in two occasions and detained once. She has been invited five times and she honoured all. Her house has been searched and some of her vital documents illegally carted away by the EFCC, Enugu Zonal office.

“She had clearly told EFCC that she did not benefit in any manner howsoever from the said fund, nor signed for it from the bank. She detailed how it was disbursed by Chime and the fact that the balance was still in his custody, yet your Enugu zone has not deemed it to invite or arrest or even conduct a search on the former governor or even the bigwigs mentioned in her earlier petition.

“Our client was shocked when her house was sealed only four days after EFCC Enugu received her letter detailing how the said fund was disbursed by Chime. Your Enugu office has been thoroughly compromised, otherwise, how can a mere messenger, an agent of a disclosed principal be made to suffer the iniquities of her disclosed principal. They just want to make her the scapegoat of a transaction she never directly participated in and never benefited from”.

The renowned lawyer further avereed that even when the governor admitted in a recent interview published in the Vanguard Newspapers of March 20, 2017 of peesonal receipt and disbursement of the said fund as well as in a stakeholders meeting held sometime in October last year,  the commission in Enugu still turned blind eye.

He therefore appealed to Magu to quickly investigate his staff in Enugu as “its now common knowledge within the region that they have a proclivity towards compromising the high neutral standards set up by the commission by allowing monetary inducements and societal positions to determine the outcome of matters reported to them”.