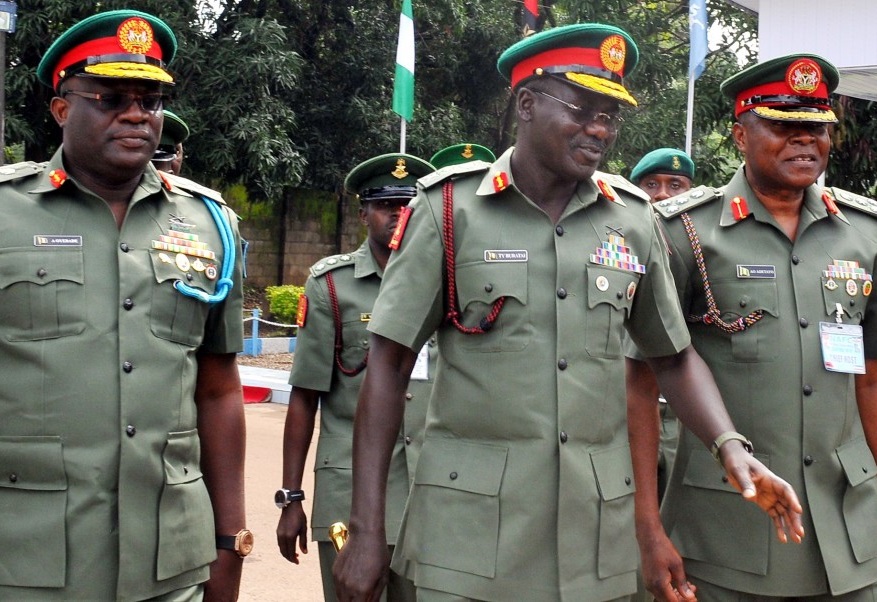 There is the mistaken notion frequently bandied that Nigeria’s President, Muhammadu Buhari, the Northern oligarchy or Nigeria’s Northern region and now, the Chief of Army Staff (COAS) Lt.Gen. Tukur Yusufu Buratai, are opposed to any clamour for self-determination by some sections of Nigeria. These days, it is further embellished with calls for Constitutional reforms and restructuring of the Nigerian federation, if breakaway is to be avoided.

The latest article on this discourse by Nigeria’s former Aviation minister, a questionable character and jailbird, Chief Femi Fani-Kayode has espoused these emotions or pontificated this erroneous feeling.

To start, let it be known and indeed should sink in the skull of Fani-Kayode and his few apologists that none of the leaders, personalities, region and institutions in Nigeria is afraid, dreads or intends to prevent any section or group in this country from exercising its incontestable right to self-determination or secession. What is being detested by all and sundry, including the international community and the United Nations (UN) is the easy resort to criminality and blackmail of the Nigerian government, its leaders and other sections of the country by the so called self-determination agitators, as currently marketed by the groups the article has specified.

To this extent, it becomes the responsibility of government and leaders worth their salt, to protect innocent and law-abiding citizens of Nigeria, from the effects of the criminal instruments deployed against them by self- seeking separatism goons. It has been argued many times before that no section of Nigeria lacks the capacity to survive as an independent state.

The excuse of oil wealth and some other easily dissolvable reasons as well as barbaric actions , which some analysts like Fani-Kayode supports cannot and will not appeal to farsighted minds. The entire globe is currently more concerned about food security. The world has embraced the prosperity of nations in agriculture as against oil. Besides, what is even the worth of oil in the international market now? Peanuts!

The Northern region of Nigeria which is often vilified and violently circumcised by separatism campaigners is rich in agriculture. It has fertile lands, mineral resources and hard working population. There are also crude oil deposits in the Lake Chad Basin in commercial quantities, which is currently being stolen by Nigeria’s neighbours in connivance with France because of insecurity in the areas necessitated by Boko Haram insurgency.

Also, the Benue Trough in the North has crude oil deposits. So, it is infantile and absolute trash to posture or postulate that Northern Nigeria and its leaders dread secession because of the innate poverty associated with the region and the desire to cling unto the oil wealth from the South.

Sections of Nigeria, ethnicities or individuals who feel compelled to secede cannot just wake-up any day and violently seal up any location in the pretense of agitating for self-determination. It becomes barefaced affront on the powers of the state to protect lives and property of the citizenry. Fani-Kayode and his soulmates are supposedly and sufficiently civilized or exposed enough to know the decently civilized approaches and procedures to the current aberration they exhibit in the guise of separatism.

In his article, Fani-Kayode argued that Afenifere, the apex Yoruba socio-cultural organization, through its number two man, Chief Ayo Adebanjo has proclaimed backing for an Oduduwa republic in the event of the failure of Nigeria to embark on constitutional reforms and re-structuring of the federation. It is possibly his personal and restricted thinking about the issue because Nigerians are yet to see the consultations of interest groups in Yoruba land who have not only deliberated over this matter, but endorsed such agenda.

But fairly, Adebanjo’s treatise could be perceived as the intellectual and lawful approach to such issues. It however, does not obliterate the lacunas in the quest for self-determination by these groups. The claim of backing by the Dr. Frederick Fasheun and the Gani Adams-led factions of the Odua Peoples Congress (OPC) and the Oodua Liberation Movement (OLM) are also enmeshed in similar fate.

It sounds more like a desperate recruitment drive. But whatever it is, the Yoruba race have representatives at all levels in the parliament to set the ball rolling. And no government of Nigeria, to say the least, under President Buhari would either interfare or reject the aspirations of the generality of the people.

As always maintained, deployment of legitimate and lawful means to pursue issues of interest from any group will not attract the ire of anybody. But dubiousness in such quests in Nigeria overshadows the genuineness of such aspirations. Even the canvasser and propagandist, Fani-Kayode, who is conscientizing the people to rise up to demand for secession has laced it in deceit.

It is wrong for him to drag Middle Belt or North Central Nigeria into the unfounded quests for separatism just because the argument must be coloured to appear thick, convincing and widespread. So, every step is infused by fraudulence in the “project” self-determination.

Anyway, no one doubts the age-long, but feeble quest for a Biafran state, which Ojukwu started in 1967, but abandoned midway and opted for the cowardly action of absconding into exile.

The trumpets of Biafra today being blown by the twin organizations-Nnamdi Kanu’s Indigenous People Of Biafra (IPOB) and Ralph Uwazuirike’s Movement For The Actualization of the Sovereign State of Biafra (MASSOB) negates sanity and anything near the aspirations of self-determination by a collective- the Igbo nation. First, these organizations are not registered and therefore are unlawful entities and ordinarily, ought not to be allowed to operate under the banner. Secondly, majority of Ndi’gbo are opposed to it. It is thoughtless madness to seek legitimacy on the altar of illegitimacy as the carriage of MASSOB and IPOB have indicated.

But both organizations are peopled by few self-seekers. For example, these two groups threatened to disrupt the pro-Buhari rally slated for March 10, 2017 in Awka, Anambra state. The rally was organized in support of the Buhari Presidency by Igbo politicians in the APC fold. In the estimation of the pro-Biafranists, it insults the cause of Biafra to host President Buhari on Igboland.

But while they perfected their crooked machinations, thousands of Igbo youths opposed to the idea of MASSOB and IPOB stormed the Dr. Alex Ekwueme Square,Awka, the Anambra State capital , the same day to identify with the Buhari administration, with the hashtag #WeStandForBuhari#.

It is therefore an extended fraud when Fani-Kayode alludes that Chief John Nnia Nwodo-led Ohanaeze Ndi’gbo, the highest Igbo socio-cultural organisation , “which represent and speak for the elders and leaders of the Igbo nation,” also back the dubious Biafran aspirations of MASSOB and IPOB. Nwodo’s leadership of Ohanaeze Ndi’gbo is still being contested by another faction in Igboland. That is their internal problem anyway. But a person standing on a contested throne cannot be honoured with the veneration and grandeur of speaking for all. Where has he got the franchise to speak for the entire Igbos?

The Niger Deltans desire for resource control and self-determination has followed the same path of infamy. The groups clamoring for such niceties for themselves need not to be elusive; what Fani-Kayode calls “hard-hitting and elusive (Niger Delta) Avengers.” Any organization or individual with a genuine aspiration and intends to pursue it legitimately stand boldly to make his case to the world. There is no cause to be elusive. But when it is contrived and designed as evil, evasiveness takes the place of honour and when it becomes too lawless, the state has an onerous responsibility to limit the excesses.

The reference to the people of Southern Kaduna under aegis of Southern Kaduna People’s Union (SOKAPU) follows the same trend of deception. What they are demanding is protection of their lives and properties by the government of Nigeria from constant attacks by suspected militias and other criminal gangs. And the government has responded with the establishment of a military barracks in the area to facilitate quick responses to crisis emergencies. Northern minorities may have issues with the government of Nigeria or Northern leaders, which is not strange altogether with people in nations. But it is not on record where they demanded for self-determination, much more with a dubious tinge like MASSOB or IPOB as insinuated.

The unwritten creed of the North, which their antagonists like Fani-Kayode have failed to know is their vow to indivisibility and unity, while they amicably resolve occasional problems.

Sheik Ibraheem El Zakzaky – led Shiite Muslims of the Islamic Movement of Nigeria (IMN) belong to the same category of lawless organizations, whose only lexicon is violence. This much was revealed by the Kaduna State Commission of Inquiry set up to investigate the Shiites clash with Nigerian Army in December 2015. How does curtailing the unlawful excesses of a violent Islamic sect, with publicized affinity to ISIS in Iran amounts to the desire for self-determination?

Sometimes, it becomes difficult to discern the focus of the arguments. The moment you think, Kayode is talking about the religious persecution of Christians in the North because Buhari, a Muslim is President of Nigeria; he deviates into the issue of Shiites Muslims subjected to the same fate under the same Buhari. Where does he really stand? No matter the extent falsehood is elevated, it cannot replace truth. What is happening is expression of government’s intolerance for lawlessness.

So, when the COAS Lt. Gen. Buratai counseled these spineless agitators on March 6, 2017 to bury the idea and campaigns for separatism, it was in good faith. It stemmed from the noticeable shortcomings and loopholes such campaigns have imbibed overtime and the resort to criminality in pursuit of these indefinable missions.

It is neither arrogance nor self-serving, as Fani-Kayode puts it. But it is a worthy advice from a professional soldier and security expert who has sighted the effects of the dubiousness in the actions and the security implications on the country. And from his vintage insight, it behooves on him to caution these campaigners of whatever hue to either do what is right or perish the idea.

And Fani-Kayode did not conceal his real intentions far before exploding to divulge his real plot – the destabilization of Nigeria, which would be rocked into another civil war, as he declared, “no country in the history of the world has ever survived two civil wars.” Buratai knew these evil intentions from the outset and his declaration was a tacit caution that Nigeria would not be compromised by these vested, demonic interests and forces.

Again, no one would stop genuine, lawful aspirations of any kind. But when it derails into lawlessness, the state would not feast over deliberate breach of security. Fani-Kayode postulates as if the defunct republics he cited around the world, which have separated, some for as much as six or more times, either automatically found solutions to their mirage of problems or adopted the offensive approaches these groups in Nigeria find worthy.

Has the crisis in Sudan ended because South Sudan emerged? What about Pakistan? Or has the breakaway of Syria from Egypt resolved crisis in these countries? The examples are inexhaustible from the list he tendered. So, it means much more than separatism to resolve issues of conflict between nationalities co-habitating together.

Perhaps, Fani-Kayode has sensed the prospects of jail over the various corruption charges he is facing in courts and thinks, a speedy break-up of Nigeria would stop his trials and extricate him from the possibility of jail. But it’s hardly the route to his escape.