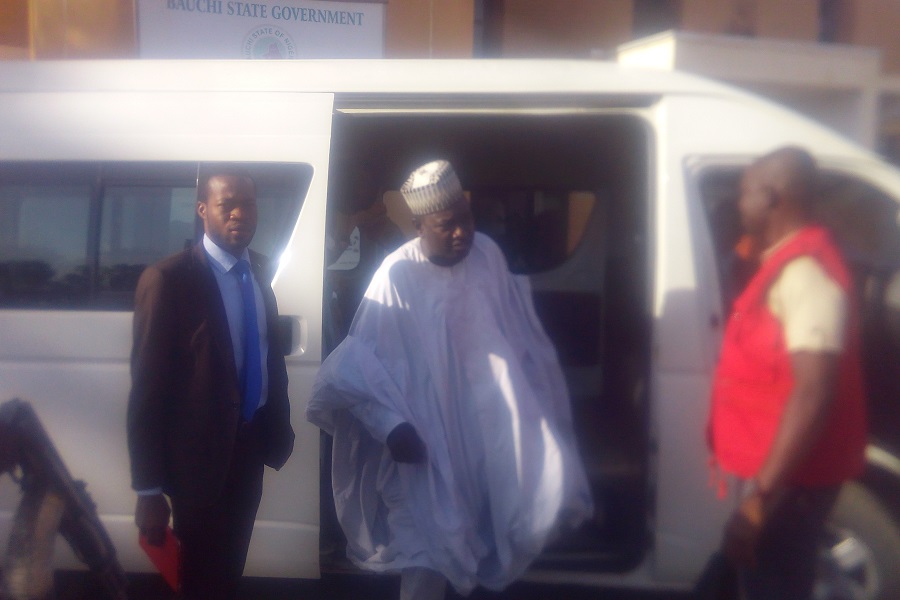 The Economic and Financial Crimes Commission, EFCC, today arraigned the duo of Usman B Abdurahman (KILISHIN DAS ) and Hafizu Dauda of the Bauchi State Judiciary before Justice M. A  Sambo of the Bauchi State High Court on a 6-count charge bordering on conspiracy, obtaining of goods under false pretence and presenting false documents.

The suspects who are Secretary and Treasurer respectively of the Amalgamated Union of Public Corporations, Civil Service Technical and Recreational Services Employees, (AUPCTRE) Judiciary Branch, Bauchi State were arrested following a petition by  a top judicial officer in the state, alleging that sometime in 2009 the association entered into contract agreement  with De-Damak Nigeria Limited to supply 3,000 unit of motorcycles at the cost of N217,000,000 for distribution to its members, based on management guarantee and irrevocable standing payment order (ISPO)  by the High Court of Bauchi State. But the unionists allegedly diverted many units of the motorcycles and sold them to M. D. Tofa Investment Limited in Kano. It was also discovered that even the few names submitted by the union as beneficiaries of the loan for remittance were fictitious; others were either retired or dead, while majority could not be found in the central data base of the Bauchi State civil Service.

Count two of the charge reads, “ that you USMAN B. ABDURAHMAN and HAFIZU DAUDA, Sometime between October and November 2009 in Bauchi, Bauchi State within the jurisdiction of this High Court ,while being the Secretary and Treasurer, respectively for the Amalgamated Union of Public Corporations, Civil Service Technical and Recreational Services Employees, (AUPCTRE) Judiciary Branch, Bauchi State, and in such capacities did with intent to defraud obtained as loan, 3000 units of motorcycle models AX 100 and CG 125 respectively valued at =N= 217, 000, 000. 00 (Two Hundred and Seventeen Million Naira only), from De-Damak Nig. Ltd under the false pretence that the motorcycles were to be distributed to members of the (AUPCTRE) union which you only utilized part and diverted 1, 170 Units valued at =N= 87, 050, 000. 00 (Eghity Seven Million, Fifty Thousand Naira) to your personal benefit thereby committed an offence contrary to Section 1 (1) and punishable under Section 1 (3) of the Advance Fee Fraud and Other Fraud Related Offences Act,  No. 14, 2006”.

The defendants pleaded ‘not guilty’ to all the charges read against them. In view of their plea, the prosecution counsel Abubakar Aliyu urged the court to fix a date for trial in line with the practice direction of the Bauchi State High Court and also to remand the accused persons in prison custody. But the defense counsel Y. A Garkuwa informed the court that he filed a bail application dated 1st March, 2017 and served same to prosecution.

Justice Sambo adjoined the case to Friday March 3, 2017 for consideration of bail application, and March 20, 2017 for trial.