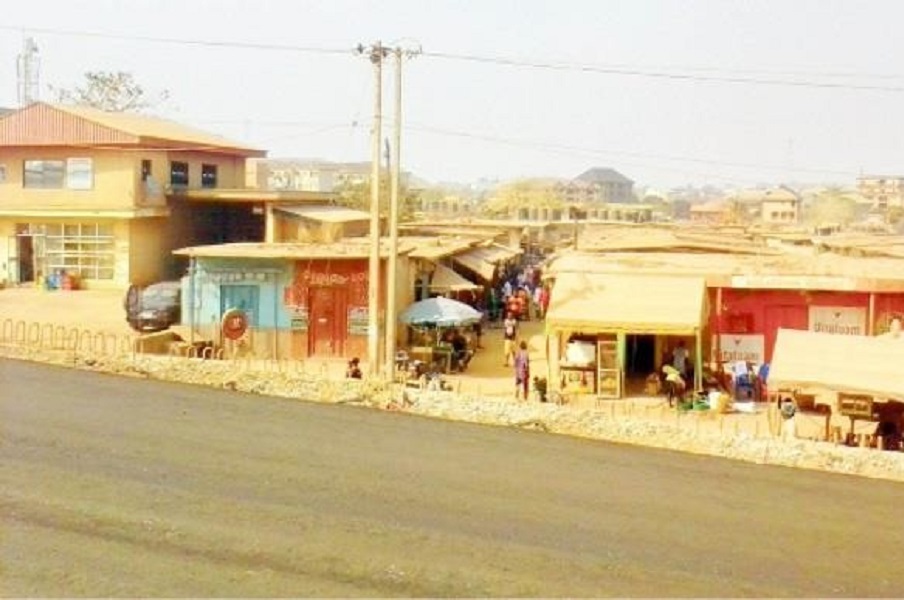 At the regional market located in Abakaliki Local Government Area of Ebonyi State, female commercial sex workers aged between 19 years and above now outnumber traders. They ply their trade at night and during the day.

They often appear in skimpy dresses as they pose in front of their rooms or walk around the premises and various entry points to entice men despite the present economic recession in the country.

Originally built for traders of building materials and foodstuff, the market has over 3,500 shops. It can be accessed through the Abakaliki-Ogoja Trans-Sahara route, the Abakaliki-Afikpo highway and other adjoining streets. Although it was built before the creation of the state, the administration of former Governor Sam Egwu expanded it with additional shops. The market now accommodates traders of different categories.

Daily Trust on Sunday learnt that the market became a hob for prostitutes and their customers because traders failed to occupy about 900 shops. Stranded travellers also spend the night at the market with prostitutes.

The sex workers, who place only mattress in their rooms to entertain their customers, are known to charge N500 for a short-time service.

According to a regular visitor to the area, who simply identified himself as Mr. Obum, the market is a good environment to catch fun. He, however, lamented the activities of policemen who often raid the place. He added that the police usually look for Indian hemp smokers and hoodlums who hide in the area to perpetrate their activities, not fun seekers.

“I like this place; it is quite cool. People from all walks of life, including travellers, security men and even foreigners, come here and catch fun with these girls. In short, it is the highest joint for sex hawkers in the whole of Ebonyi State. The reason is because you have good girls here. They don’t fight one another, let alone their customers, as prostitutes do in other places. They, however, do everything possible to lure you to patronise them.’’

When our correspondent visited the section occupied by the prostitutes from around 9am and 11pm on Thursday, it was observed that interested men had already started looking for girls to have fun with.

Our correspondent further learnt that the prostitutes, who occupy hundreds of shops in the market, pay rents to agents of the owners of the shops or second parties. It was also gathered that in some cases, the agents equip the rooms.

Investigation by Daily Trust on Sunday revealed that five years ago, shops were sold between N1.5million and N2million, depending on their sizes, but presently, shops in the market go for N4.5 million each or N15,000 per month.

As a result of the presence of prostitutes, drinking joints are located in several parts of the market. The joints are avenues for relaxation by prospective customers of the sex workers. Music are common features of the area, especially at night.

It was further learnt that, that section of the market is headed by a man popularly referred to as chairman. The chairman, who some of the prostitutes simply address as Boss, has the duty to mediate in misunderstandings among them, administer justice and pronounce judgement on offenders. Fighting and quarrelling are highly prohibited in the area.

Due to the nature of the area, there is a chemist shop that operates 24 hours daily. The shop, which is located at the centre of that section of the market, serves as an venue where the prostitutes buy condoms. Because of its 24-hour service, anybody in dire need of drugs at anytime of the day goes there.

Our correspondent, who pretended as one of the fun seekers in the area, observed that the prostitutes charge extra amount of money for patronage outside the market.

It was also gathered that many of the prostitutes are from Ebonyi and the neighbouring states of Cross River, Benue, Enugu and Imo.

When our correspondent asked why the prostitutes prefer to ply their trade inside the market instead of going outside, he was told that they make not less than N12, 000 daily on short-time service alone.

But the activities of the prostitutes have become a source of concern to traders in the market and the state government.

Speaking to Daily Trust on Sunday, Mr. Obiefuna Onuoha, one of the businessmen who deal on paints, blamed the situation in the market on shop owners who prefer to use their shops for illicit activities instead of their original purpose. He added that the activities of the prostitutes had led to the overcrowding of the market as many are afraid to rent shops at the section populated by the girls for security reasons.

“These commercial sex girls are gradually taking over this market, and there is nothing we can do to chase them away,” he lamented.

Another businessman in the market, Okechukwu Onyejide, who specializes in plumbing materials, said the development had resulted to an increase in the cost of shops at the building materials section.

“Every shop in this market goes for N4million and above. And many people want to own shops; they don’t want to be tenants. The presence of prostitutes on the other lane has prevented the expansion of the market, especially now that Governor David Umahi has built a flyover at that lane, which will increase commercial activities in the area,” he said.

Condemning the presence of the harlots and their activities in the market, the special adviser to the governor on market development, Hon. Peter Oba, promised that the administration of Governor Umahi would take a drastic action against them once the flyover is completed and commissioned.

Oba, who is also in charge of trade unions in the state, observed that the flyover, which is located opposite the section of the market where the harlots operate, has equally become a haven for hoodlums, saying they have converted the market to their hideout. He, however, pointed accusing fingers to shop owners.

“The state government had tried to take over the Abakaliki regional market, but shop owners refused. However, we are aware of the presence of prostitutes at the section of building materials.

“But I want to assure you that as soon as the flyover, which is gulping billions of naira, is completed, we will clear up the area and those prostitutes will be asked to vacate for security reasons.

“If we don’t do that, it means that the whole place, including passengers, the garage there and the property would be threatened by these hoodlums who are hiding behind the prostitutes in the market. We will also ask other illegal occupants of the market to leave,” he said.

It was alleged that some of the prostitutes who get pregnant in the course of their escapades sell their babies to willing clients.

In a bid to uncover the allegation that unwanted babies are sold to willing buyers, our correspondent met one of the commercial sex workers who offered her one-year-and-six-month-old baby boy, who looked malnourished, for N250, 000.

Asked why she wanted to sell her baby, the prostitute, a native of Afikpo who simply identified herself as Amaka, said the little boy was a stumbling block to her sex business.

“I cannot go outside at this time of the night because I have a baby boy who is just a year and six months. I can neither leave him nor carry him to the place of your choice since it is late already,” she said.

Some traders who spoke to our correspondent appealed to the Ebonyi State government to construct roads in the market as the poor nature of available ones distribute dust to shops, a situation that leads to the destruction of goods.