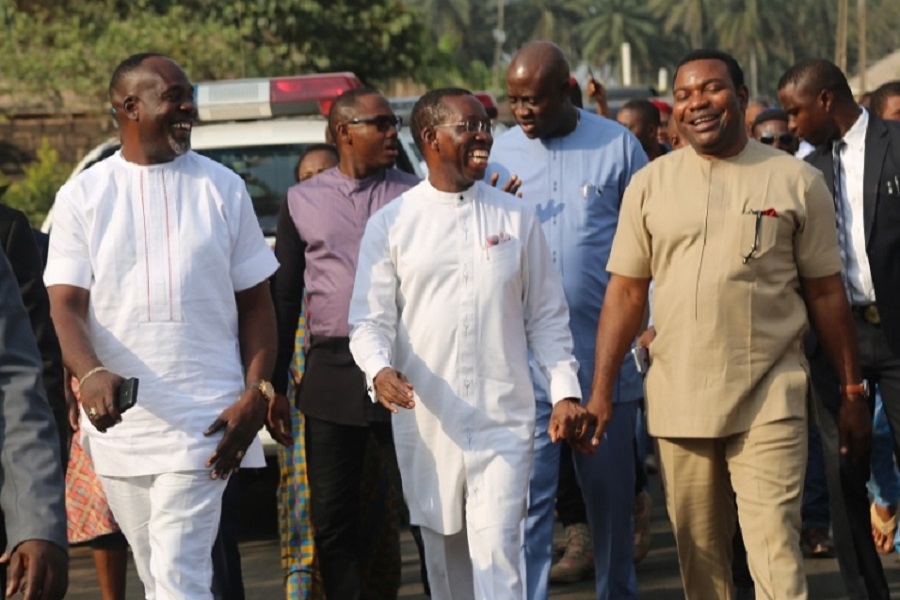 About two years into the administration of Senator (Dr) Ifeanyi Arthur Okowa of Delta State, the government is yet to deliver to Deltans are yet to lay hands on any ‘Mega/Star Project (s)’ in any part of the state as a legacy of the Okowa-led administration.

From the body language of the Okowa-led government, it has no plans to lay the foundation of what Deltans are aspiring to see from the government in the state unlike his predecessors.

Okowa’s aide, Commissioner for Information, Patrick Ukah, who was responding to a question put to him by a journalist during a Post EXCO briefing held at the Press Centre, Government House, Asaba, the Commissioner said, “if an airport can be considered a star project, was airport built in one year? Ukah retorted.

“I think you are aware that we just started what we call a massive state secretariat that will house all MDAs, we should take pains to go and see what is happening there”.

Since assumption of office in May 29th 2015, Okowa, is still struggling to put the runway of the Asaba downgraded airport in order after the runway has gulp over N10 million with its completion not in sight.

The confused Commissioner continued: “even the airport till today, we just finished an inspection, we must be happy and say we have something like that. I think it is the second longest runway in Nigeria, I think if we finish what we are doing now, two smaller planes can land without disturbing each other, and 747 plane can land in Asaba airport. So, it can truly be considered as an International airport”.

Following the over zealousness of Okowa’s information managers especially the Information Commissioner, who quickly made refuter, Nelson Egware and Ossai Success Ovie, who took to their Facebook pages on the alleged $10 million diverted by their employer, Ukah gave another shocker when he shun another journalist who was giving a candid advise.

The journalist was trying to appeal that an allegation of such magnitude on financial misappropriation, refuters shouldn’t be the best option but a press conference considering the weight of the allegation.

However, the journalist was not allowed to land before Ukah swoop on him, “on the issue of financial misappropriation, I think I have made a statement and that statement resolves it. The mood you want it can be how you want it but how we want it is to tell you that it is the biggest lie of the season. I don’t want us to go to that issue and I don’t want us to dwell in issues that are not important”.