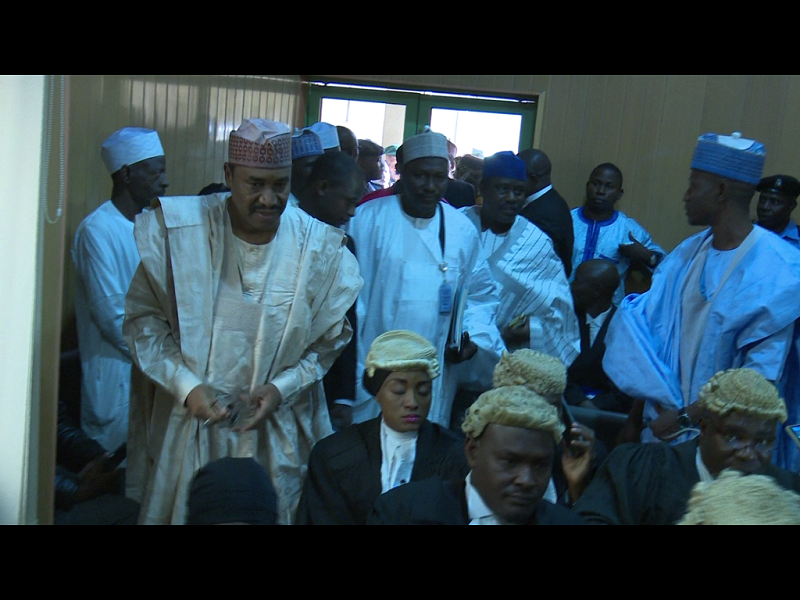 Advertisement
EFCC PRESS RELEASE
The Economic and Financial Crimes Commission, EFCC, on Tuesday, February 21, 2017 arraigned a former Governor of Katsina State, Ibrahim Shehu Shema before Justice Maikaita Bako of the State High Court, Katsina on a 22-count charge of criminal breach of trust, forgery and abuse of office.
Shema was charged alongside Sani Hamisu Makana, Commissioner for Local Government and Chieftaincy Affairs; Lawal Ahmad Safana Permanent Secretary for Local government and Chieftaincy Affairs and Ibrahim Lawal Dankaba, Chairman, Association of Local Government of Nigeria, ALGON, Katsina State Chapter, for allegedly diverting public funds to the tune of N11billion during his tenure as governor between 2012 and May 2015.
One of the counts reads:
“That you, Ibrahim Shehu Shema whilst being the Governor of Katsina,  Sani Hamisu Makana whilst being Commissioner for Local Government and Chieftaincy Affairs,  Katsina State,  Lawal Ahmad Safana whilst being the Permanent Secretary for Local government and Chieftaincy Affairs of Katsina State and Ibrahim Lawal Dankaba whilst being the Chairman Association of Local Government of Nigeria, Katsina State Chapter, between September, 2012 and May 2015 at Katsina, within the jurisdiction of this Honourable Court were entrusted with certain property to wit; an aggregate sum of N4,463,600,000 (Four Billion, Four Hundred and Sixty Three Million, Six Hundred Thousand Naira Only) committed a criminal breach of trust in respect of the said sum by transferring it from Katsina State Joint Local Government Account domiciled at Access Bank, Katsina Branch, to the account of ALGON domiciled at Union Bank, Katsina Branch and subsequently withdrew same and dishonesty convert it to your personal use (under various guises including funding security intervention fund to all the 34 local governments in Katsina State and falsely described in several payment vouchers and memos) and thereby committed and offence contrary to Section 311 and punishable under Section 312 of Penal Code Cape 96 Laws of Katsina State, 1991”.
The accused persons pleaded not guilty to the charge.
Following their plea, counsel to EFCC, Jibrin S. Okutepa, SAN urged the court to fix a date for trial and asked that the accused persons be remanded in prison custody since there was no motion for their bail before the court.
But, J. B, Daudu SAN, representing the accused persons applied orally that his clients be admitted to bail.
Okutepa countered the application arguing that, “now that the court has assumed jurisdiction and the charge has been read, there is a possibility of the accused persons escaping if granted bail.”
He urged the court to consider the gravity of the offence and refuse the oral bail application and order the defence counsel to apply formally.
Justice Bako granted the accused persons bail in the sum of N1billion and a surety each in like sum.
The case has been adjourned to March 28 – 29, 2017 for the commencement of trial.
Earlier before the charge was read, Justice Bako had dismissed two applications filed by the accused persons through their counsel, Daudu, challenging the jurisdiction of the court as well as the competency of the charge. Both applications were resolved in favour of the respondents.
Wilson Uwujaren
Head, Media & Publicity
February 21, 2017