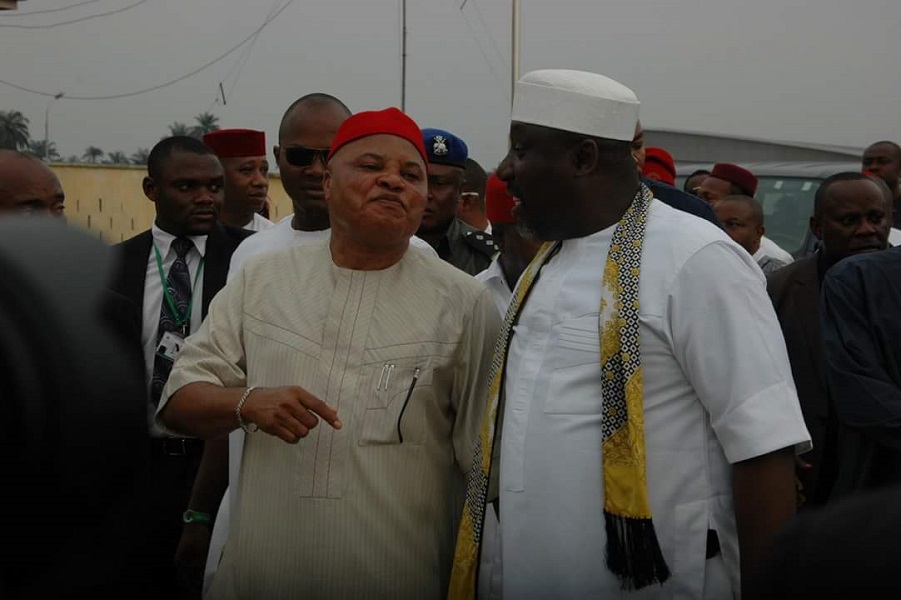 Advertisement
Contrary to Governor Rochas Okorocha’s public objection of Senator Ifeanyi Araraume’s ambition to govern Imo State come 2019, the governor has actually endorsed the candidature of the senator for the plum job, 247ureports.com can reveal.
Governor Okorocha had early January this year at the stakeholders meeting of the All Progressives Congress, APC held at the Imo International Convention Centre, IICC, Owerri, told members of the party the reason he would not want Araraume to be the governor of the state come 2019.
According to the governor, who stated that he had not endorsed anybody as his successor ahead of the 2019 governorship election in the state, Araraume would rather be serving the state better if he joined “me to Abuja where I feel we can do more jobs as senior hands for Imo State”.
Araraume defected to the APC from the PDP shortly before the 2015 governorship election in Imo State,  a move which aided Rocahs Okorocha to defeat the PDP governorship candidate, Hon Emeka Ihedioha.
However, since that public proclamation by the governor last January about Araraume’s ambition, many pundits have expressed surprise that Araraume, who, it was believed, supported the governor to win his second election in 2015 based on the agreement that he (Okorocha) will support him to succeed him in 2019.
But, investigations carried out by 247ureports.com revealed that Okorocha will not renege on that agreement for Araraume to succeed him come 2019, but in doing that, he would be very cautious not to injure the feelings of Owerri people, who had been clamouring to govern the state for a long time now.
According to sources close to the governor, Okorocha actually made the public statement so as not to wish away the loyalty of the Owerri people who had supported him since 2011 with an agreement and hope that he would hand over to them after his tenure.
The sources, who would not want their names in print, told 247ureports.com, said ”This as far as Oga (Okorocha) is concerned is a forgone conclusion. You don’t expect him to come out openly to support Araraume because of the interest of some other groups in Owerri Zone. You know these people (Owerri Zone) just like others in Orlu Zone were first instrumental to the victory we got in 2011 and even in 2015.
“But, Araraume played a major role when our boat was about being rocked by PDP and Emeka Ihedioha and he swung the result in our favour. So, when the time comes, oga will always support Araraume, who is the most capable aspirant for now in the party”, one of the sources said.
“Again, let me remind you about what the governor did to show that Araraume will be his successor in 2019. are you aware that he sent people from his Ideato area to go to Senator Araraume’s house and thank him for his role in 2015 governorship election and to assure him of their support in 2019? That move was made with the full support of Governor Okorocha. So, he knows what he’s doing”.
“You will equally recall that Ideato South leaders led by Chief Bon Ohiri had said that their resolve to support Araraume’s future political activities and, especially in 2019, was informed by the critical role his political structure, the Destiny Organisation played in the governorship supplementary election which returned Governor Okorocha and that the only way the Ideato south people can pay him back would be to support every of his future political endeavour, and all he needs to do is to intimate us whenever he is ready to vie for any political office. I took time to tell you this because I was part of that delegation”.
Another source asked 247ureports.com, “Were you not there when the governor gave conditions and prerequisites for those that will succeed him? All those conditions were given to favour Senator Araraume and there is no person that can easily fund governorship campaign in our party for now other than Araraume. So, oga knows that for APC to retain power in Imo State, people like Araraume will have to fly our party’s ticket.
“I think that is the major reason Araraume has not responded and will never respond to that comment by the governor because he knows that His Excellency knew what he was saying was not serious”.
It will be recalled that the governor had last year told the people of the state that zoning was no longer feasible in the state, and that people who want to occupy the governorship position of the state or succeed him should work for his or her merit and not by allocation.
He had insisted that power will be taken and not given.
Meanwhile, information filtering in to 247ureports.com, from the camp of Araraume has it that apart from the agreement he had with Okorocha before 2015 governorship election, the senator is not resting on his oars and is alleged to have made strong moves to co-opt other top party leaders into his governorship project.
To ensure that the greater part of the party belongs to him, one of his allies told our reporter that Araraume had since last year been funding the APC by paying monthly stipends to  party executives at the ward, local government and state levels in a party badly cash strapped despite having a serving governor and many members in the Imo State House of Assembly.
Members of the APC in the state House of Assembly and some transition committee members of the 27 council areas of the state are said to be secretly loyal to the senator, who was said to be paying them monthly stipend.