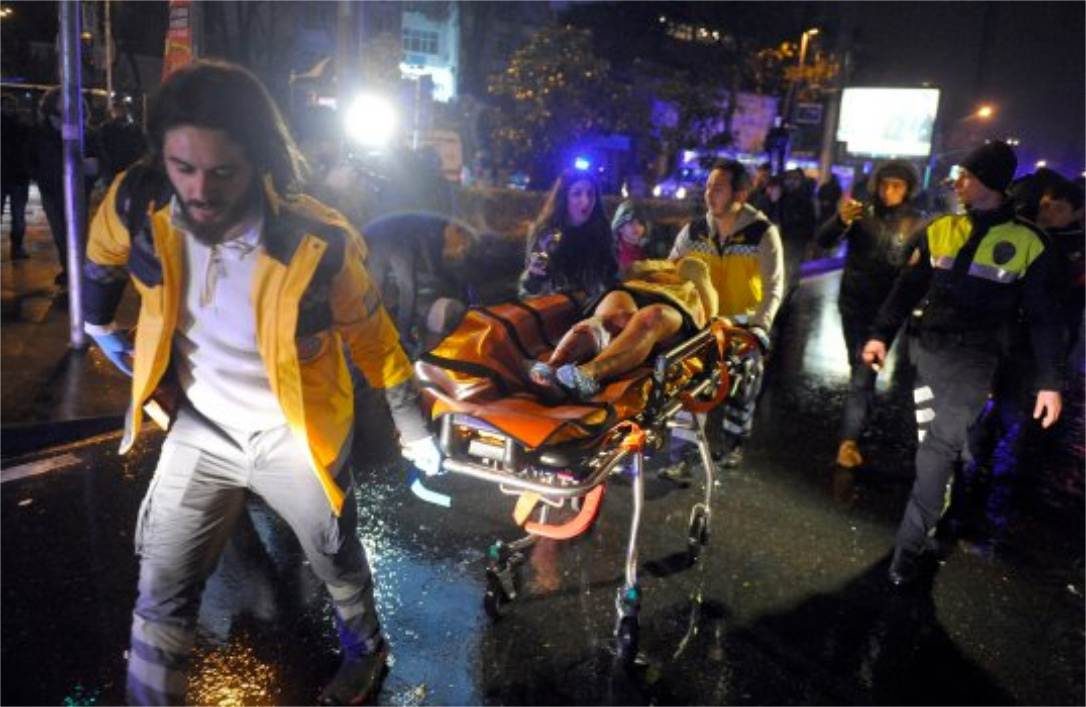 ISTANBUL (AP) — An assailant believed to have been dressed in a Santa Claus costume opened fire at a nightclub in Istanbul during New Year’s celebrations Saturday, killing at least 35 people and wounding 40 others in what the province’s governor described as a terror attack.

Gov. Vasip Sahin said the attacker, armed with a long-barreled weapon, killed a policeman and a civilian outside the club before entering and firing on people partying inside. He did not say who may have carried out the attack.

“Unfortunately (he) rained bullets in a very cruel and merciless way on innocent people who were there to celebrate New Year’s and have fun,” Sahin told reporters.

Media reports said the assailant entered the Reina nightclub, in Istanbul’s Ortakoy district, at 1:45 am, dressed in a Santa Claus costume.

Some customers jumped into the waters of the Bosporus to escape the attack, the report said.

NTV television said the assailant may still be inside the nightclub.

Police in riot gear and machine guns backed up by armored vehicle blocked the area close to the Reina night club, one of the most popular night spots in Istanbul in the amid heavy rain. Several ambulances flashing blue lights arrived on the scene, some taking wounded to Istanbul hospitals.

The attack occurred shortly after midnight in the club where an estimated 600 people celebrated New Year’s eve. Several shocked revelers were seen fleeing the scene after the attack and the music fell silent.

The club is located close to recent suicide attacks that killed dozens near a soccer stadium.

Istanbul had already been under heavy security surveillance during the festivities, with police mounting machine guns and armored vehicles parked on the streets.

Security measures had been heightened in major Turkish cities, with police barring traffic leading up to key squares in Istanbul and the capital Ankara. In Istanbul, 17,000 police officers were put on duty, some camouflaged as Santa Claus and others as street vendors, state news agency Anadolu reported.

Ankara and Istanbul have been targeted by several attacks in 2016 carried out by the Islamic State group or Kurdish rebels, killing more than 180 people.