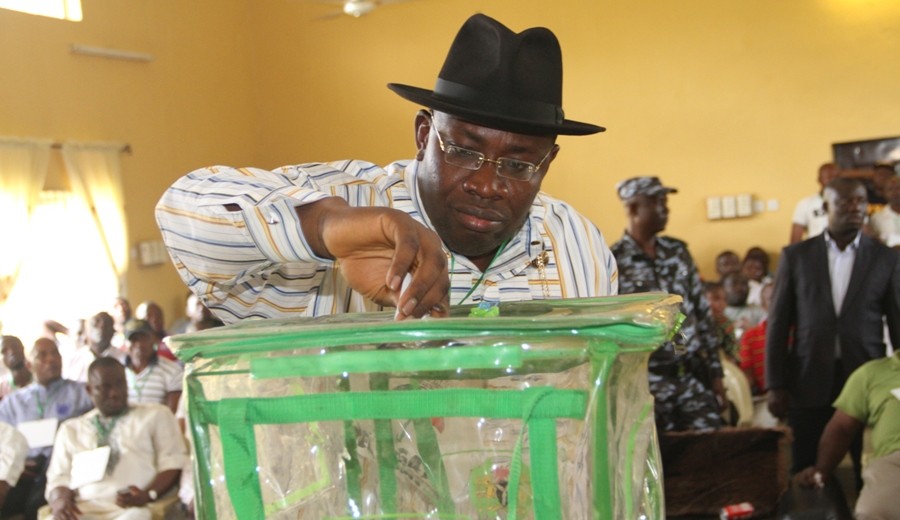 With about 24 hours left for the Supreme Court prepares to deliver judgement on the Bayelsa State governorship election tomorrow (Tuesday), a civil society organisation, Movement for the Independence of the Judiciary in the Niger Delta, said it had uncovered plots by the Apex Court Justices to cancel the election of Governor Henry Seriake Dickson and order a re-run within 90 days.

The National President of MIJN, Patrice Egribido, in a statement said top officials in the Presidency were mounting pressure on the Supreme Court to deliver judgment that would order for a rerun which would provide enough time for the All Progressives Congress (APC) to properly arrange the logistics to rig the re-run election and impose its candidate, Chief Timipre Sylva as Governor.

Part of the deal by the Presidency was to force the Chief Justice of Nigeria, (CJN), Justice Mahmud Mohammed to select the panelists from the new Supreme Court Justices to be sworn in today (Monday) with a clear directive to do a dirty job for the APC. The Presidency has also threatened to use the DSS to sting any Justices that refuses to do its bidding.

This development according to the MIJN has suddenly breathed life into the APC in Bayelsa State as Sylva’s supporters erupted in jubilation over the weekend; organizing parties across Bayelsa State.

Egribido emphasised that even though the threats by the Presidency have sent fears down the spines of the Justices but there are strong indications that some Justices are refusing to play ball, insisting on the rule of law.

At press time, the group however said the CJN was also keeping the names of the justices to hear the Bayelsa Governorship appeal closely to his chest. Justice Mohammed who is billed to retire on November 10 is said to have vowed never to compromise his office especially at this time that he is at the ‘‘departure lounge’’ of his flourishing career!

The statement reads in part: ‘‘This is not the first time, the Presidency would be making incursion into the judiciary on the Bayelsa governorship case to sway judgement in favour of the APC. It is unfortunate that a government which claims to be fighting corruption would be bent on putting justices under pressure to do its bidding.

“What the Buhari Presidency has forgotten is that manipulating court judgements is worse than naira and kobo corruption. The Presidency should urgently desist from shopping for favourable judgements as well as stop threatening incorruptible justices before the Buhari administration gives credence to critics who believe that the recent raid on the homes of some justices by the DSS was meant to gag the judiciary from being impartial!’.”

While stressing that his group was apolitical, Comrade Egribido averred that his organization would continue to defend the independence of the Judiciary in the country and in the Niger Delta in particular.

Egribido said both the Bayelsa State Elections Petitions Tribunal and the Appeal Court had in separate unanimous judgements upheld the last governorship elections in Bayelsa which Governor Dickson won and wondered whether the Federal Government was oblivious of the security implication of thwarting the will of the people at the apex court?

The chilling revelations by Patrice Egribido have raised tempers in Bayelsa State especially in the camp of the Peoples’ Democratic Party (PDP).

The Bayelsa State PDP Chairman, Cleopas Moses has urged PDP faithful to be calm, lamenting that the desperation of the Federal Government to win Bayelsa State, under the watch of President Muhammadu are drifting the country to a totalitarian, fascist state.

He called on men of goodwill to rise to the occasion before Nigeria is turned into an APC- one- party- state. While expressing confidence in the Judiciary, the PDP chieftain urged the Supreme Court Justices never to capitulate to the manipulation of the presidency.

Moses however noted if elections hold 100 times, Governor Dickson and the PDP will continue to trounce the APC because according to him, the Governor  has delivered on his campaign promise by placing Bayelsa State on the path of security, rapid development, peace and prosperity for which ‘‘our people are eternally grateful.’’

Honourable Cleopas Moses said:   ‘‘Governor Seriake Dickson of the PDP overwhelmingly won theDecember 5 and January 9governorship elections in Bayelsa State in 7 out of 8 local government areas of the state. Timipre Sylva and the APC were roundly rejected by Bayelsans in the elections. Both the trial court and the Appeal Court justifiably upheld the election of my Governor and it will be preposterous for the Supreme Court to cancel the election just because the Presidency wanted it cancelled…’’

‘‘For me, cancelling the election will stab justice on the head and make mockery of democracy and it is against this backdrop that I urge the judiciary to always stand up to be counted in dispensing justice and in the defence of democracy in our fatherland.”