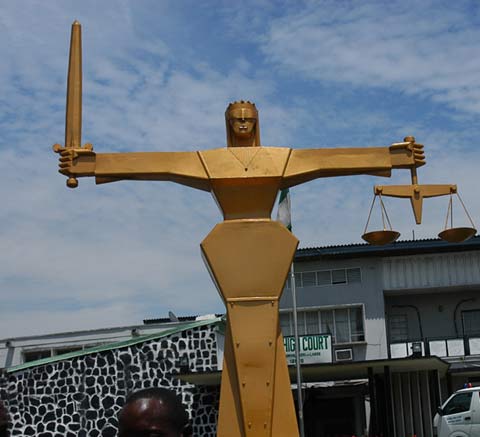 There was pandemonium on Tuesday at the Magistrates’ Court complex in Benin, Edo State, when an 18-year-old man, Abudulahi Muhammed, defecated on his body and attempted to flee to evade trial.

It was learnt that Muhammed, who was brought to the court with other suspects, was about to have his case registered when some court workers observed that he had soiled himself with excreta.

He was brought to court to face trial for allegedly stealing four cartons of powdered milk.

An eyewitness said the 18-year-old suspect suddenly pulled off his trousers and took to his heels half-naked, causing confusion within the premises of the court complex.

He was, however, rearrested after the Investigative Police Officer, Aigbochie Iruonagbe, called for assistance.

Muhammed was later offered a bag of sachet water to wash himself before he was arraigned.

The police prosecutor, Thomas Ojo, told the court that the accused committed the offence on Mission Road, on October 8, 2016.

Ojo stated that the accused stole the items from one Favour Nwachukwu, saying the act was punishable under Section 390 (4) (a) of the criminal code.

The accused person pleaded guilty to the one-count charge on stealing.

The presiding Magistrate, Mrs. J. O. Ejale, adjourned the case till October 14 for facts and sentencing.