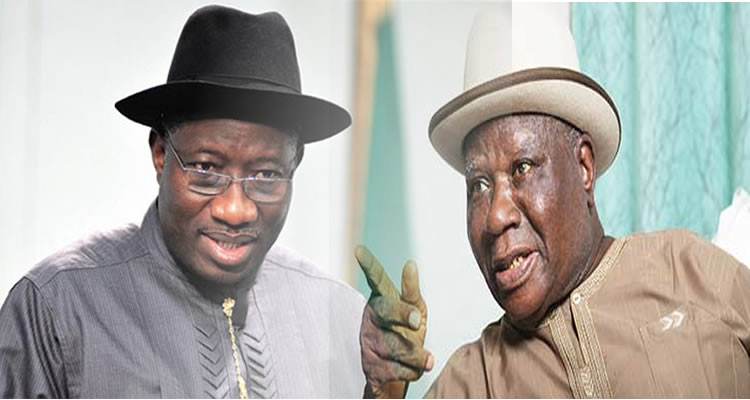 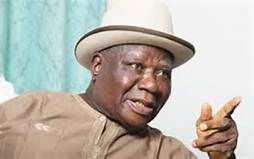 ejaculation on Ex-president Goodluck Jonathan due to his alleged

weakness to fight corruption by a self-imposed elder statesman, Chief

Few days ago, Chief Edwin Clark made headlines in most National

Newspapers, wherein in his usual posturing, threw hard stones on

former President Goodluck Jonathan. He accused the ex-president of

lacking the Will power (Political Will) to fight corruption. Edwin

Clark also announced his disengagement from politics and from the

At over 85 years of age, Edwin Clark should be respected, but

unfortunately this man has constantly made himself available to be

children. It is said that an elder does not stay in a house or place

where a goat is entrapped. It is the duty of an elderly man to advice,

caution and rebuke his children when they are doing the wrong things.

An elder who supports corruption and corrupt practices is not worthy

to be respected. An elder who encouraged a sitting president to go

against his commitment with major stakeholders in the country, and

later turn around to blame the President, is not worthy to be

eyes. Today, because political power has changed hands, someone is now

making an attempt to re-write history, and thereafter warm his way

the country. Former President Olusegun Obasanjo was the “Original”

godfather to President Goodluck Jonathan. It was Obasanjo who made

Jonathan Governor of Bayelsa state. It was Obasanjo who made Jonathan

Vice President of Nigeria. It was Obasanjo who ensured that Jonathan

became President, when it was obvious that President Umaru Yar’Adua

was terminally ill. Other eminent Nigerians played major roles as

Then suddenly from nowhere, perhaps due to ethnic consideration, Chief

Edwin Clark emerged and dislodged Obasanjo by “cutting off his hands”

(apologies to Joe Igbokwe) from the Presidential seat occupied by

Jonathan, and effectively took over as the new godfather. Edwin Clark

reportedly relocated to Abuja from Delta State. He set up an “Office”

and became the centre of attraction for politicians, bootlickers,

sycophants and Businessmen who allegedly came to seek audience with

was a multi-Billion Naira business. Regrettably, Edwin Clark was

reportedly “Chairman and Managing Director” of that business empire.

This is corruption of the highest order.

President Jonathan is a gentleman per excellence. He reportedly signed

an undertaking that he would not contest the 2015 Presidential

election. He even made a public declaration to that effect. But it was

Chief Edwin Clark who persuaded and encouraged Jonathan to go against

that commitment, and he went ahead to declare his intention to contest

the 2015 Presidential election. The resultant effect was that Jonathan

polls. It was Edwin Clark who was insulting, assaulting and

threatening to deal with every “Okeke, Okafor, Okorie and Okonkwo” in

this country if Jonathan was not allowed to continue in Office. It was

Jonathan’s god father (Edwin Clark) who made it clear to every “Shehu,

Mohammed, Ibrahim and Adamu” that there was no corruption in the

government of President Jonathan. With his current vituperations

against his godson, Edwin Clark has exposed himself as a man not

worthy to be called a leader. Edwin Clark was there when “Drivers were

building palatial mansions”, yet he did nothing, he said nothing and

could not even caution his son, Jonathan. Perhaps because he too was

benefiting from the “Oil Well” flowing from Aso-Rock.

On the issue of corruption proper; some notable Nigerians including

Obasanjo had accused the immediate past government of corrupt

practices and lacking the Will to fight the monster. But it was Chief

from Corruption. Infact, Obasanjo and Edwin Clark were constantly at

each other’s throat, with their nonsensical open letters which they

used to pollute the sensitivities and sensibilities of Nigerians.

I remember when I was the Senior Special Assistant on Media and later,

on Special Duties at the Imo State House of Assembly. I uncovered

large scale fraud running into billions of naira, involving the then

his Chief of Staff (Kodichi Anamekwe) and others. Chief Edwin Clark

was one of those I contacted and informed of the large scale fraud. I

followed it up with a petition to EFCC exposing in details, the fraud.

Again I sent hard copy of the petition to Edwin Clark in April 2014.

Unfortunately after going through the petition and enclosed documents,

though I also sent hard copies to Force Headquarters and other

relevant places. The question is; what moral justification does Edwin

Clark have to condemn and attack former President Jonathan? Is it

because the “Oil Well” has stopped flowing to him? It is indeed very

out to condemn Edwin Clark betrayal of Goodluck Jonathan. This old man

time the former President need him most. But rather than taking up

this responsibility of being with the humiliated Jonathan, who has

face. Yes, Edwin Clark is now frustrated, so he “POURED” his

frustration on Jonathan’s face. Too bad.

It is high time leaders and elder statesmen weigh their speeches

before going public. Elder statesmen should be sources of blessings to

this country. They should be sources of blessings to the new

generation of leaders in this country. They should be sources of

inspiration to the Nigerian Youth. But most unfortunately, some of

these old men are daily disappointing us with their unguarded talks

and selfish attacks on their benefactors. If Jonathan had been

re-elected, believe me, Edwin Clark would have been the first person

to congratulate him by telling us how wonderful, mercurial and great

his son is. Now that reverse is the case, Edwin Clark has shown that

he is an ingrate, desperado, senseless and a glorified bootlicker.

order, they would continue in their “Ejaculatory Outbursts” of

constantly making unguarded statements. Nigeria has changed, so have

its youths. We will no longer condone rubbish from Edwin Clark and his

likes. They should visit National Icons like Professor Anezi Okoro,

Pastor Gbile Akanni etc. and have good tutorials on how to be

A word is enough for the wise.

I rest my pen.