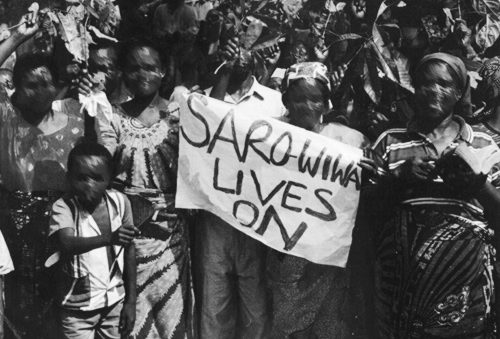 The Kingdom Coordinators and Chapter Leaders Forum of The Movement for the Survival of the Ogoni People (MOSOP) have sent a strongly worded letter to the chief executive officer of Belema Oil Producing Limited, Mr Tein Jackrich warning his company to stay away from Ogoni oil.

The letter which was signed by the Chairman of the Chapter Leaders Forum, Frank Jonah, the secretary, Bartholomew Oluji noted that MOSOP will hold the company for any acts of human rights violations consequent upon the plan to forcefully resume oil operations in Ogoniland.
Below is a copy of the letter:
We write on behalf of The Kingdom Coordinators and Chapter Leaders Forum of The Movement for the Survival of the Ogoni People (MOSOP) to inform you of our strong disapproval of your plans to resume oil mining or any form of oil-related activities in Ogoniland on behalf of the Shell Petroleum Development Company of Nigeria Limited or as an independent company.

We are well aware of your entreaties in Ogoniland and you will be knowledgeable of the controversies it has generated. You would have judged by now that your actions threaten the prevailing peace in Ogoniland and has capacity to throw the entire area into crises.

This is because the people have not seen any justification for the resumption of oil mining in Ogoni after years of brutal persecution by Shell and the Nigerian government, both of whose interest you seek to promote and protect by attempting to resume mining operations in Ogoni.

Let us remind you that we will hold you responsible for EVERY action you take in Ogoniland and particularly for every case of human rights violations on our people.

You would recall that between 1993 and 1998, Ogoni experienced the worst case of state-sponsored violence in the world through the promotion of a government policy which was code-named “Wasting Operations”. We see your plan to resume oil activities in Ogoni as one attempt to prosecute the policy of “Wasting Operations” and to further endanger the lives of our people and we will not tolerate that.
We therefore strongly advice you against every persuasion to prosecute the Ogoni entry campaign as it will clearly lead to clashes from protesting local communities whose rights to decent living your actions will seriously threaten.

Finally, we wish to sound it categorically clear that the Ogoni People reject any form of oil mining operations until the issues of our dispute with Shell and the Nigerian government are amicably resolved.

We therefore, once again, plead with you and your collaborators to stay away from the Ogoni oil.

Your respectfully,
For and on behalf of The MOSOP Kingdom Coordinators Forum