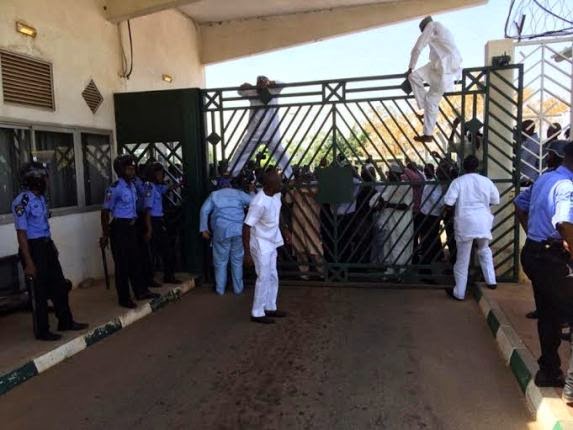 We the people of Tambuwal local Government, on belf of our teeming youth, we would hold the JONATHAN lead administration, the acting Inspector-General of Police, Suleiman Abba, national security adviser Alh. Sambo Dasuki  and other security agencies in the country responsible for anything that happens to the Speaker of the House of Representatives, Rt Hon. Aminu Tambuwal, as a result of  NASS  siege and the withdrawal of his security details.

Abba had been, citing section 68(1)(g) of the Nigerian constitution, withdrawn Tambuwal’s security aides arguing that by defecting from the Peoples Democratic Party, PDP, to the All Progressives Party, APC), he had seized to be Speaker of the House. Is Abba a judge in one our Nigerian law court? If NO, then who’s he to interprets that law.

The action of the Inspector-General of police is term to be unintelligent and purely politics in nature. Be warned that, nothing must happen to the Speaker as a result of your indiscipline to the number four citizen of our dear country and our son.

“We, at the youth of Tambuwal are appalled by the siege of national assembly and the withdrawal of security details of the Speaker of the House of Representatives, Aminu Tambuwal, ostensibly because he had decamped to the All Progressives Congress, APC. “APC is not only speaker’s choice, but his people” if ever you’ve a punishment for defectors, then you should punish us all here in his CONSTITUENCY (Tambuwal/kebbe).

“The act is shameful, distasteful,  unconstitutional and demonstrates our parochial sense of power and very little knowledge of history.

Deprived?  Our son the Speaker of the House of Representatives, Aminu Tambuwal is without his security aides, is ABBA, SAMBO DASUKI AND JONATHAN not aware that is God that protect lives not their doggy boys?

We’re not lawyers, or court lords but we challenge them to produce a constitution that says Aminu Tambuwal is not Nigerian Speaker! “No part of the constitution of the Federal Republic of Nigeria says the Speaker of the House of Representatives should come from the majority party. Section 50(1)(b) only says, ‘There shall be …a Speaker and a Deputy Speaker of the House of Representatives, who shall be elected by the members of that House from among themselves… and Aminu was elected as Speaker on the said base.

“We find it appropriate to cite the examples of Mimiko and Ali Modu-Sheriff, governor of Ondo State, the former governor of Borno State and the current anarchy in IKITI state house of assembly despite PDP minority.  All their security details were not withdrawn when they decamped to the Peoples Democratic Party, PDP.”

You give a senator Ali Modu-Sheriff 120 soldiers to protect his live as compensation for decamping to PDP, and withdrawn Speakers Security details, Siege national assembly, used teargas to attack him and loyalist member for his sin of joining APC. Hmm!  Which country are we living?

“It gives us concern that our political leaders are determined to learn very little about democracy and always seem too keen to overheat the polity over things that count for little.

“The police and other security agencies complicit in this disgusting conduct should hold their heads in shame. Herein lays the essence of strong institutions which we have always advocated.

“For those who take pleasure in converting to personal use, public/state institutions, and today’s men soon become yesterday’s men. What goes around comes around.

The Nigeria police was the first government establishment to move against Mr. Tambuwal after he defected to the APC on October 28. What anarchy are you creating IG Abba?  Are you PDP fan or what?

On October 29, the police withdrew the speaker’s security aides and announced that Mr. Tambuwal was no longer the speaker.

“In light of the foregoing, we demand immediate restoration of Tambuwal’s security detail and all the rights and privileges that accrue to the Office of the Speaker. It is not about our Son Tambuwal, it is about the office which he holds.

“And in any case, only few, arguably will contest that he has not discharged and acquitted himself as speaker.
We would like it to be on record that we will not fold our hands while little minds threaten our Son and hard-earned democracy, just for political hated. Nothing should happen to Tambuwal.”

New Bauchi State: Is It Mere Slogan Or Coined On Concrete Evidence? – By Sulaiman Maijama’a