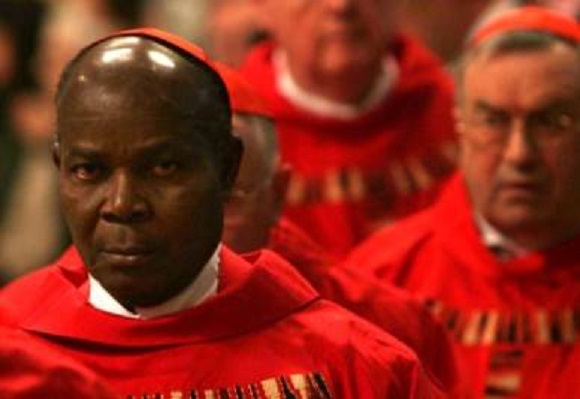 …says we’ve videos where you appeared

The Christians United Against Boko Haram on Sunday in Abuja slammed a former Catholic Archbishop of Lagos, Cardinal Olubunmi Okogie for his comments on the current President of Christian Association of Nigeria, Pastor Ayo Oritsejafor, saying he should keep quiet because under him (Okogie) Nigeria was taken to the Organization of the Islamic Conference.

The organization therefore urged him “to be mindful of his words and avoid being used by enemies of the Body of Christ”.

Okogie was quoted to have, while reacting to the $9.3 million arms deal in South Africa, criticized Oritsejafor for establishing a University and for allegedly romancing with President Goodluck Jonathan, saying it had totally derailed him from the essence of Christian leadership.

But the Executive Secretary of CUABH, Deacon Olusola Oyedokun in a statement issued on Sunday in Abuja entitled:”Okogie: Those who live in glass Houses”, said Okogie’s attack on the integrity of the current CAN President was hypocritical and unbecoming of a man of his personality.

He warned that “those who live in glass houses should not throw doyens at the undeserving”.

Oyedokun, son of a former Deputy National chairman of the Peoples Democratic Party and member of the Board of Trustees of PDP, Shuaib Oyedokun, expressed disappointment that Okogie could compare his tenure to that of Oritsejafor.

He said, “As CAN President under whom a secular Nigeria was taken to the Organization of the Islamic Conference, Okogie has very little moral grounds to stand on to attack the integrity of Pastor Ayo Oritsejafor whose name invokes apprehension in those who wish to entrench one religion over the other in Nigeria.

Oyedokun urged Cardinal Okogie not to act on rumour and innuendo with regards the $9.3 million that was to be used by the Office of the National Security Adviser to buy arms.

He said that if people were to act on rumour and innuendo, certain people would not be able to explain exotic videos for which they were rumored to have appeared.