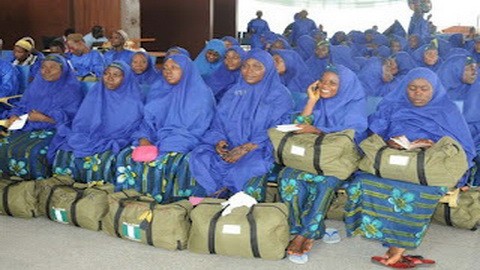 The Federal Government had stopped about 300 intending Pilgrim fromBorno and Yobe from flying to Saudi Arabia through MaiduguriInternational Airport. The order came this morning when the Pilgrimshad finished boarding and just about to take up. From all indications,all commercial flights were banned from coming to Maiduguri by thisorder.The Secretary to the Borno State Government Ambassador Baba AhmedJidda had while briefing the intending Pilgrims on why the flightcould not take up, called on the them to see this as an act God andurge them to pray for peace for their States in particular and thecountry in general.The SSG said the Borno State Government was surprised by the suddenstoppage of flight and it’s doing all it could to resolve the matterwith the Federal Government.A Max Air flight chartered by Sky Net had no option than to move thepassengers from Maiduguri to Mallam Aminu Kano International Airport,Kano.This order also came on the same day Ahzan Air had completed itsarrangement to launch its daily commercial flight operation on theMaiduguri -Kano- Abuja route.