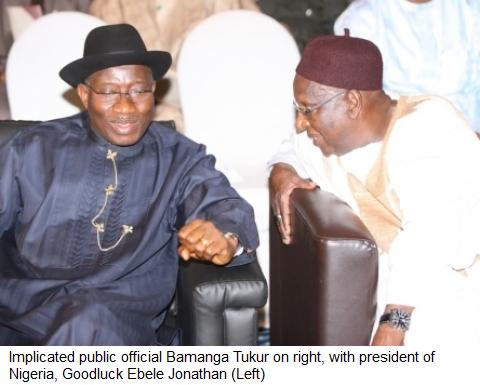 “Boko Haram is fighting for justice; Boko Haram is another name for justice.” This statement as treacherous and obscene as it reads was made by the chairman of the ruling People’s Democratic Party, PDP, Bamanga Tukur on May 16th of 2012, as relayed in a major Nigerian editorial, the Punch.

Despite this public statement in direct promotion and support of Boko Haram terrorism, which has not as at the time of this release, been denied or retracted by the accused, Bamanga Tukur was kept as the head of the ruling party by Nigeria’s President, Goodluck Ebele Jonathan till January of 2014, when he was retired from the position and immediately appointed again by the President as the head of a very sensitive office, the Nigerian Railway corporation.

We are calling on the world to recognize the dangerously precarious position if Nigerian masses at the hands of terrorists and a government that promotes, supports and sponsors terror. Such statements by Nigerian leadership facilitate the recruitment of terrorist fighters and the garnering of financial support for the callous actions of the sect. Furthermore, under the current administration, the probable depth of the direct involvement of the accused in the activities of this sect is yet to be investigated.

Today the global community recognizes that the threat of Boko Haram is real and serious. Boko Haram who the leadership of Nigeria considers as “fighting for justice,” have abducted 234 innocent girls from school for over four weeks. Boko Haram have massacred thousands of villagers and destroyed hundreds of farming villages. It is unconscionable that the Nigerian leadership can consider them as justice fighters. Nigerian lives are being auctioned by a reckless, corrupt and terrorist government that believes that justice is the impunity to amass billions of the nation’s petro dollars under cover of the distraction of Boko Haram terror and other supported ethno-fractionating crises.

We repeat our May 7th call to the United Nations to immediately commence the imposition of strong sanctions and resolutions against officers of the Nigerian administration and their private partners.

We also call on global security departments to assist Nigeria in arresting the well known leadership and politician sponsors of terror, like the fore mentioned head of Nigeria’s Railway Corporation and former ruling party chairman. The global terror threat of Boko Haram will not and cannot be seriously tackled so long as Nigeria’s leadership remains in approval of the actions of the terrorists and their supporters, in violation of global anti-terror conventions.

We notify Nigerian civilians to conduct a civilian arrest of President Jonathan for several counts of violation of the nation’s Terror Prevention Act of 2011, as elaborated in our Press release of May 10th.

Citizens Right To Defend Themselves Under Consistent, Unabating Annihilation

In review of the government permitted destructions of Nigeria’s farming villages, Bama, Chibok and Gamboru Ngala, to mention a recent few, in which cases, the Nigerian security services had up to eight hours to act to secure life and property, but failed to do so; we call on local, regional and international authorities to assist the vulnerable masses in acquiring arms and necessary training to defend themselves in the recognition of the lack of serious commitment and inability of the current State security apparatus to ensure the safety of their life and property. Leaving these vulnerable communities, which as CNN reporter who visited Chibok assessed, lack protection of the State security agencies whose officers are “only situated around major cities,” is a gross violation of human rights to security and protection from un-cordoned and government enhanced terror.