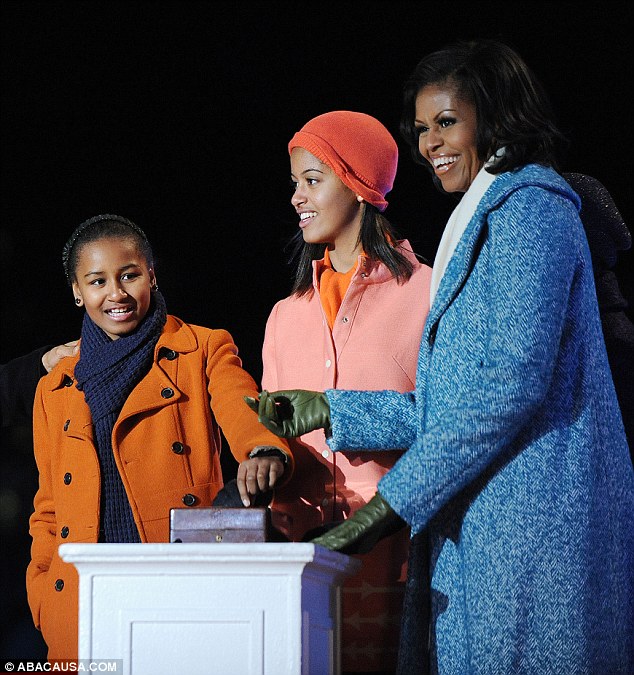 Michelle Obama, her daughters and her mother plan a week-long solo visit to China this month that includes meetings with China’s first lady and high school and university students – and that will likely cost U.S. taxpayers millions of dollars.

President Obama and his family have come under heavy scrutiny for the unprecedented high travel costs during his time in office – and a week-long trip to China for four members of the First Family, members of the Secret Service and other members of the White House staff will likely cost several millions of dollars.

The president’s pricey travels have become so controversial that Judicial Watch was forced to sue the Secret Service and Defense Department to get them to turn over records on the amount of taxpayer money used to fly the First Family all over the world – in many cases for vacations or fundraisers – over the last two years of his administration. Whenever you see this image, tap to view all the images in a gallery
Ok

Far East: Michelle Obama and her daughters Sasha (left) and Malia (center) will travel to China this month

What the records show was startling.

According to Judicial Watch, it cost more than $11 million for the president and his wife to travel to Africa to attend Nelson Mandela’s funeral in December of last year. According to the New York Daily News, the Obamas were only in Africa for ‘less than 13 hours.’

But that trip was nothing compared to a 2013 visit the Obamas made to the Dark Continent, which reportedly cost tax payer more than $100 million.

On the 2013 trip, some of the reported expenditures include the stationing of a Navy aircraft carrier off the coast of Africa equipped with a fully staffed medical trauma center, military cargo planes to fly a fleet of 56 support vehicles to transport the Obamas – complete with 14 limousines and three trucks carrying bulletproof glass to cover the windows of the hotels where the Obamas were to stay – and fighter jets that flew in shifts to provide coverage over the president’s airspace for the entire trip.

In June, the first lady went to Ireland for a two-day trip. The cost to taxpayers: $5 million.

Michelle Obama reportedly stayed at a $3,300-per-night hotel in Dublin, and needed to book 30 rooms at the posh Shelbourne Hotel for her staff and security detail. Expensive: Travel expenses for the First Family have cost U.S. taxpayers hundreds of millions of dollars over the last two years alone

For two vacations the Obamas took in 2013 – one to Hawaii and one to Martha’s Vineyard – records show that it cost taxpayers a whopping $7,396,531 in flight expenses alone. That figure also includes travel expenses for the president’s trip to California to file the Tonight Show with Jay Leno.

During an August trip to California, during which Obama attended a party held by Democratic fundraiser Jeffrey Katzenberg and again appeared on the Tonight Show, taxpayers paid more than $2 million in travel expenses for the president and his security detail.

The president will not be joining his family on what will be the first lady’s first visit to the Asian economic powerhouse.

In an announcement Monday on the White House blog, the first lady says a China visit is important because it is the most populous country in the world, with more than 1.3 billion people, and is an important world actor.

Mrs. Obama will travel from March 19-26, spending several days in the capital of Beijing before stops in the central city of Xian and the southwestern city of Chengdu, the White House said. Her schedule includes a meeting with Peng Liyuan, the wife of Chinese President Xi Jinping. Tonight: Taxpayers footed the more than $2 million bill so Obama could appear on the Tonight Show with Jay Leno

Mrs. Obama missed meeting China’s first lady last June when the newly installed Xi, accompanied by his wife, traveled to Southern California for a summit with President Barack Obama. The presidential-level meetings were around the time of Sasha Obama’s 12th birthday, and the White House said Mrs. Obama stayed in Washington with family.

She wrote a letter to Peng Liyuan welcoming her to the U.S. and expressing hope that they would meet soon in China, the White House said.

In China, Mrs. Obama will focus on the power and importance of education, including in her own life, during visits to a high school and a university in Beijing, and a high school in Chengdu.

She recently began an effort to encourage America’s young people, including some of the most economically disadvantaged, to pursue a college education. On past trips outside the U.S., she also has made the same point to students from the host country. Mrs. Obama grew up in a poor Chicago family, but earned degrees from two of America’s best universities. Africa: It cost taxpayers $11 million when the Obamas went to Africa for Nelson Mandela’s funeral. They were there for 13 hours

In China, she will be accompanied by daughters, Malia and Sasha, and her mother, Marian Robinson, who lives at the White House. President Obama will not be on the trip; he is scheduled to depart the U.S. later that week for stops in the Netherlands, Belgium, Italy and Saudi Arabia.

Mrs. Obama is encouraging American students to follow her trip on social media and the White House website, where she will post a daily travel blog. In preparation for the trip, she scheduled a visit Tuesday to a Washington charter elementary school with a Chinese-immersion, international baccalaureate program.

In her blog post, the first lady said countries today are no longer isolated and face many of the same challenges, whether it is to provide students with a good education, combat hunger, poverty and disease or address threats like climate change.

‘These issues affect every last one of us, so it’s critically important that young people like you learn about what’s going on not just here in America, but around the world,’ Mrs. Obama said. ‘Because when it comes to the challenges we face, soon, all of you will be leading the way.’

‘That’s why everywhere I go, whether it’s here in the U.S. or abroad, I meet with young people to hear about your challenges, hopes and dreams — and that’s what I’ll be doing in China as well,’ she said. ‘I’ll be focusing on the power and importance of education, both in my own life and in the lives of young people in both of our countries.’ History: First families going back to Richard Nixon have visited China on diplomatic trips, including the family of Bill Clinton, seen here

Among recent first ladies, Laura Bush traveled to China with President George W. Bush, and Beijing was the place where Hillary Rodham Clinton made her now famous declaration at a United Nations women’s conference in 1995 that ‘women’s rights are human rights.’

Mrs. Obama’s trip will be a highly visible endeavor, but the fact that she’s taking the rest of her family suggests ‘she’s not going in search of a crusade of one sort or another,’ said Jonathan D. Pollack, a senior fellow in the John L. Thornton China Center at the Brookings Institution think tank in Washington. ‘The clear intent here is not to touch any particular hot buttons.’

Mrs. Obama’s previous solo travels outside the U.S. as first lady were to Mexico in 2010, and Botswana and South Africa in 2011.