It was a fitting start.  A celebration of togetherness! Political differences between some former heads of state and President Goodluck Jonathan were temporarily set aside last Monday when they joined the president to kick off the centenary celebration at the banquet hall of the presidential Villa.

General Mohammadu Buhari and Olusegun Obasanjo were some of the surprise appearances at the kick off of the celebration because of their recent relationship with President Jonathan and his government.

Since he made his foray into the murky waters of presidential contest and has consistently lost, General Buhari has demonstrated his exasperation with the governments that supervised such elections by boycotting all activities relating to such governments. Since 2003 when he contested and lost to Obasanjo, Buhari has refused to attend even the National Council of State, NCS, meetings and has carried his protest to Late Umaru Yar’Adua and Jonathan administrations.

For Obasanjo, open criticism of the Jonathan administration has remained one of his past times since for a while since resigning as the chairman of the board of trustees of the ruling Peoples Democratic Party, PDP.

So, when the government of the day announced that the activities to mark Nigeria’s centenary celebration would begin last Monday, not many Nigerians expected to see the two former heads of state in attendance, not necessarily because of their lack of faith in the Nigerian nation but as a way of protesting their displeasure with its current leadership. 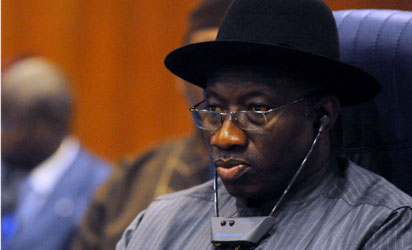 But when the activities for the celebration began, all but one of the living former Nigerian leaders attended the dinner which was meant to unveil the centenary Logo and its theme song.  Though it is about one hundred years ago that the disparate ethnic and cultural groups in what is now known as Nigeria were brought together by Fredrick Luggard, the relation between and amongst the various ethnic groups have remained at best tenuous, and it is the ability of the Nigerian people to remain together despite the various challenges that have continued to buffet the country that the present administration wants to celebrate.

And though last Monday’s ceremony was meant to be just a kick off, the gaiety that characterized the ceremony gave an indication of what Nigerians should expect during the year long celebration that will culminate in a grand finale in January, 2014. According to the plans outlined by the government, a completely new city would be built to commemorate the centenary celebration while other activities have also been lined up for the ceremony. Government has consistently given the assurance that no public funds would be committed to the project as it would be private sector driven, not a few Nigerians have remained skeptical that so much resources would be expended on a project that ought to have been channeled to other core productive sectors of the economy. It is the skepticism of a people who are used to being taken for granted by their government.

But in a remark last monday, the Secretary to the Government of the Federation, Senator Anyim Pius Anyim, whose office is coordinating the ceremony said the celebration is not only desirable but imperative because of the landmark achievements the country has recorded in the last 100years since its amalgamation. According to the SGF, the celebration should offer Nigerians and Nigeria an opportunity to rejuvenate and have faith in their country and its potentials. He said the ceremony would be used to replace pessimism with optimism to make the country rise above its challenges.

Senator Anyim’s message was re-echoed by other dignitaries present at the ceremony. According to former Head of State, General Yakubu Gowon, who had the unique opportunity of presiding over the country during its most trying moments, “Nigeria is a unique nation, a nation of diverse, strong and hard working people” that has remained united despite the challenges that it had faced in the past and was still facing.

Mindful of the events of the recent past where the country was plunged into a three year civil war, Gowon, who unveiled the anniversary emblem, prayed that “may the emblem symbolize a rallying point for the unity of the nation. May it be a reminder of our entity, unity and oneness of the nation which not negotiable and serve as a symbol of [peace, unity and prosperity”.

For Obasanjo, the centenary celebration should be a wake-up call to all Nigerians to re-examine themselves and their commitment to the Nigerian dream. “If you cannot love Nigeria and be positive about it and make contributions to its progress, then I should ask you what sort of Nigeria are You?” he asked rhetorically. The former president noted that what should occupy the minds of Nigerians should be the desire to make Nigeria a ‘humane, just and progressive Nation’.

General Abdulsalam Abubakar who presented the events theme song noted that despite the many challenges the country has experienced in the last 100years, “there is every reason to celebrate in song and dance as one nation, indivisible Nigeria has come to stay”.

And this was the message that President Jonathan relayed to the capacity crowd at the banquet hall of the presidential Villa when he spoke during the flag off of the centenary celebration. According to the president, the amalgamation of the northern and southern protectorate in 1914 to form Nigeria was not a mistake but an act of God which should not be challenged by any mortal.

According to President Jonathan, apart from the natural resources, the country is blessed with a unique collection of people specially created by God and it behooves on every Nigerian to strive to protect this union.

“The unity of Nigeria is indivisible and non-negotiable, we must remain the forward looking people that we are. I see a united, powerful and prosperous nation that will make the generation yet unborn very proud. Arise we shall and prosper we will” the president prophesied.

The next one year is going to witness a lot of activities as part of the celebration.

Apart from usual political talks, there would be arts exhibitions, literary festivals, essay competition for students of primary, secondary and tertiary institutions and other uniquely Nigerian stories to be told in different modes and forms. The centenary celebration if handled well may well again be the beginning of rejuvenation of the country and restoration of hope in our leaders.

For President Goodluck Jonathan, this is one opportunity that he cannot allow to let it slip.