LAGOS — The Presidency  was, last night, jittery, following the collapse of plans to remove Governor Chibuike Amaechi as chairman of the Nigerian Governors Forum, NGF.

The failure of the plans which got to fever pitch, yesterday, forced presidency officials into a change of plans ahead of today’s scheduled election of a new chairman of the NGF. 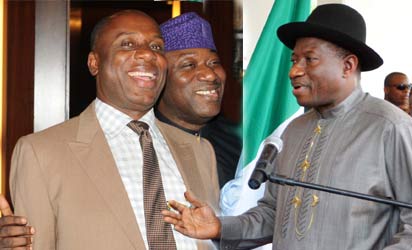 The closed door meeting with the governors was ongoing at press time and the NGF election and the simmering crisis in the party were to top the agenda.

For most of yesterday, a senior presidency official, it was learnt, was working the telephone, pressing usually friendly governors to join the rebellion against Amaechi’s chairmanship of the NGF.

The pressure from the presidency, it was learnt, instigated anger among the governors who had been friendly with the president. President Jonathan, however, has not been directly fingered in the mobilization of the ‘Amaechi Must Go’ campaign which some sources linked to one of his very senior officials from the South-South.

As at last night, the anti-Amaechi governors were just five and reportedly comprised two South-South governors, one North Central governor, one South-East governor and one North-West governor. Governor Martins Elechi of Ebonyi State was as at yesterday said to be undecided.

Buoyed with the overwhelming support they were receiving, the pro-Amaechi camp was pressing for the election to go ahead today despite the lobby by the presidency officials to truncate the election or stop the meeting all together.

“Many of the governors, including those normally supportive of the president are very angry over the telephone calls they have been receiving on the issue and that is why they are turning against the villa on this issue,” a source close to the development told Vanguard last night.

By yesterday evening, with the villa getting little support from governors to oust Amaechi, the game plan changed as the villa officials and supportive governors started canvassing the cancellation of the election.

“They now want to cancel the election, but we would not allow that,” one source said.

A governor in the pro-Amaechi camp with the scent of victory in the air told Vanguard last night that “everything will be clear by tomorrow.”

Reflective of the confidence in the pro-Amaechi camp, the NGF meeting which normally holds in the night has been scheduled in the day, to commence by 4 p.m.

The secretariat of the NGF which the anti-Amaechi camp tried to drag into the face-off through blaming it for allegedly failing to give proper notice of last Thursday’s meeting of the NGF also cleared itself of the allegation.

“We are professionals and we have a way of handling our duties that cannot be faulted. It is not true that any governor was not informed of the meeting. Is it that we will inform only South-West or North-East governors? No, it is not possible,” the senior official told Vanguard yesterday on the condition of anonymity.

Some governors were angered by the push against Amaechi and that he is being persecuted for articulating the interests of the governors.

“He is being punished for representing the collective views of the governors, not his own personal views,” one source close to his camp said yesterday.

Meanwhile, the PDP governors were also expected to also press the president to call the national chairman of the party to order following Alhaji Bamanga Tukur’s insistence on having his way in the Adamawa crisis.

Tukur had last week gone against the resolution of the National Working Committee, NWC which restored the Alhaji Umar Kugama-led executive of the party when he recognized the rival chairman, Mr. Joel Madaki as the authentic chairman of the party in Adamawa State.