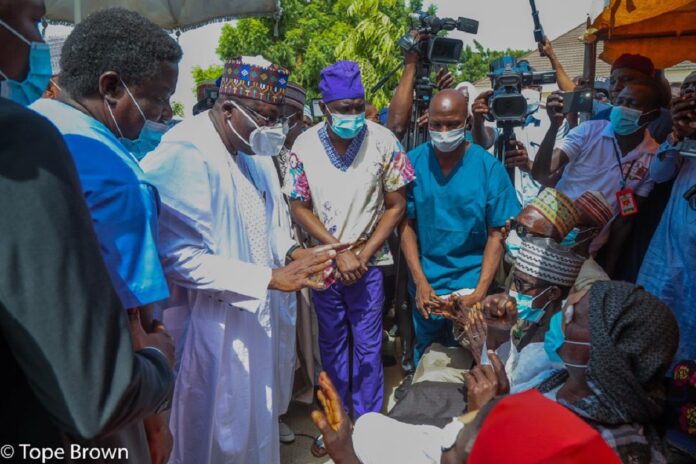 President of the Senate, Ahmad Lawan, at the weekend, flagged off an expanded medical outreach for 2020 in his Yobe North Senatorial District.

The flag off event held at the General Hospital, Gashua and Federal Medical Centre, Nguru all in Yobe State.

The free medical services include eye treatment and surgery, free gynecological check up and surgeries.

The annual event which is being sponsored by Senator Ahmad Ibrahim Lawan Foundation Medical Outreach was started in 2018 with main focus initially on eye related medical conditions but it has now been expanded in scope of treatment and number of beneficiaries.

Speaking at the ceremony, Lawan said: “This medical outreach is in keeping with what we believe is important and necessary Intervention for our people who need either the surgeries or the general treatment to recover their sight or improve their sight.

“We started this(in 2018) because we noticed that people had those challenges at that time and yet majority of them didn’t have the means to receive any medical attention.

“And since I could afford it, I thought it was my duty to provide means of some Intervention. So we initiated this programme in 2018.

“In 2019, in addition to eye surgeries, we introduced hydrocele and we increased the number last year. This year we introduced more areas of Intervention and also increase the number of patients or beneficiaries.

“We believe this is a worthwhile venture that will make people’s lives better. This Intervention means a lot, makes a lot of difference in the lives of many of them. And we are doing it to complement the efforts of the Yobe State government.

“The Yobe State government has been doing fantastically well in this area but we believe that we have  some areas that we can also bring in our Intervention to support the state government.

“I think we are doing the right thing and I believe that next year, by the Grace of God, we will do more if we see more people who need our Intervention.”

The Medical Director, FMC, Nguru, Dr Abubakar Muhammad gave an assurance that the highest quality of care would be accorded the patients from the screening through surgery, post operative period and would also follow them up till they are completely healed.

The flag off ceremony was witnessed by the Emir of Bade, Abubakar Sulaiman Umar, Emir of Nguru, Alhaji Mustapha Ibn Kyari and Speaker of Yobe State House of Assembly, Hon. Ahmed Lawan Mirwa among other dignitaries.

The Senate President seized the opportunity of his three-day visit to his Constituency to also flag off the construction of some township roads both in Gashua and Nguru.

Shortly before his departure on Sunday, the Senate President gave out some relief materials to victims of the recent flood that occurred in parts of his Constituency in Bade and Jakusko Local Government Areas.

To those communities whose Houses were affected by the flood, 4000 bags of cement, 480 bundles of Zinc, 1150 logs of timber and 160 bags of nails were distributed to them.

Those other victims whose farmlands were affected shared among themselves food items including Rice, Maize and Millet. Provisions were made for a total of 650 bags of each of the food items.

Lawan told the beneficiaries that the gesture was meant to be just support and his personal Intervention to complement what the state government had done for them.