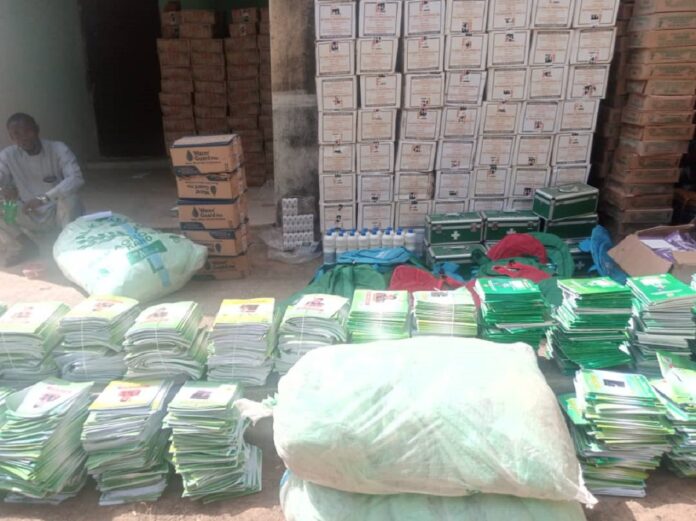 He said under the program BESDA constructed Modern toilets, temporary learning shades, boreholes, and constructed wells across the nine local government areas.” The projects are there physically for whoever wants to go and see”.

Sirimbai who is the state Project Coordinator of BESDA  said “ with the distributions exercise and employment of 1500 teachers to teach in the newly established centers shows that tsangaya school pupils and girls hawkers have returned to classrooms, and very soon the remaining pupils that didn’t get their learning materials will collect their own, because during mapping exercise the number of pupils captured in  both girl child and tsangaya centers are over 70,000, but after the covid pandemic, we have carried out the center validation to know the actual number of pupils that returned to school, we have over 58,000 that returned after school reopening as at the time of the exercise , and the number of pupils we have supersedes the target set up by BESDA”.

Chairman said we are mindful that the number of the Pupils in the school centers will keep increasing in the coming months because many pupils that went to farm will return to classrooms. “  we use computer technology in the enrollment of the pupils across the over 1000 established centers of learning for Tsangaya and Girl Child Pupils in the state”,

He said with the current distributions exercise its now clear that the present administration has touched the lives of citizens in each ward in the nine local government areas which is one of the largest and widest achievements of the Bauchi State Governor Bala Mohammed in his efforts to reduce the highest number of out of school children in the State.

He commended the Governor for giving them the opportunity to do a quality job that has a direct bearing on the lives of the common man and less privilege in the State.

Tsangaya School proprietors and girl child centers Alaramma Mallam Kabiru and Mallam Muhammadu Zirame commended the steadfastness of the project coordinators and the judicious distribution of the materials and explained that their action is worthy of emulation.

They assured that the pupils will make the best use of the items for the development of education in the state in order to have a good leaders tomorrow.