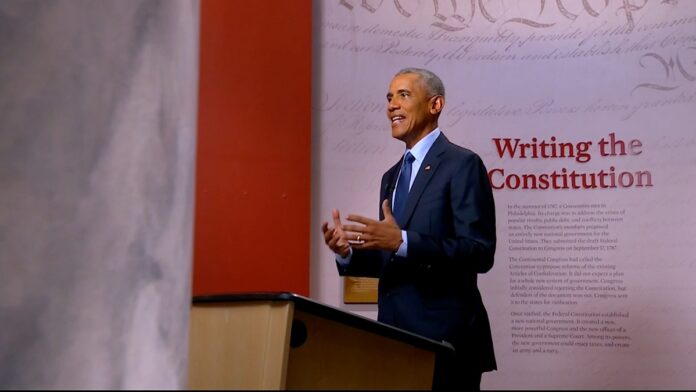 Former President Barack Obama addressed the nation on the third night of the Democratic National Convention Wednesday in a chilling speech. And while Trump’s predecessor is known as a warm, charismatic orator, he commanded the attention of the American people in a very different way this time. Obama gave his formal endorsement of the Democratic presidential nominees Joe Biden and his vice presidential pick Kamala Harris while also denouncing President Donald Trump in a nearly unprecedented way. But while the takeaway from his speech was largely around his strong words for Trump, many missed his true warning: Democracy itself is in danger.

“I did hope, for the sake of our country, that Donald Trump might show some interest in taking the job seriously,” Obama said, “But he never did.” He went on, “Donald Trump hasn’t grown into the job because he can’t. And the consequences of that failure are severe.” The former president continued that under Trump, democratic institutions have been “threatened like never before.”

While he understands the many reasons that Americans lack trust in government right now, he said, listing special interests groups lobbying Congress and offshoring jobs, Obama warned that the Trump campaign is also “counting on your cynicism.” This is because “They know they can’t win you over with their policies. So they’re hoping to make it as hard as possible for you to vote, and to convince you that your vote doesn’t matter.” As a result, he said that democracy will continue to wither “until it’s no democracy at all.”

While the existential message may have seemed lost on the masses in a speech where Obama skillfully criticized the entire Trump presidency, some pundits were eager to point out the real power in his message. “He was talking about the end of democracy. Not complaining that Trump overturned some policies,” Zerlina Maxwell, a writer and political analyst tweeted. “I feel validated in the sense of existential dread that I’ve felt for 4 years.”

Maxwell echoed concerns among some Americans that Trump’s actions are steering the country toward “fascism,” something anti-fascist and anti-racist activists have been warning for the last five years. But as the country faces the doom of a flailing United States Postal Service, random law enforcement raids in cities like Portland and Chicago, and the mass detention of unauthorized immigrants, the fascism of Trump’s presidency becomes impossible to ignore — especially for Obama.

Obama has been critical of Trump in the past, most recently describing the Trump administration’s coronavirus response as “an absolute chaotic disaster.” But never has the former president made such a bold statement about the threats facing not only democratic institutions, but also our communities, as he did in his speech Wednesday night.