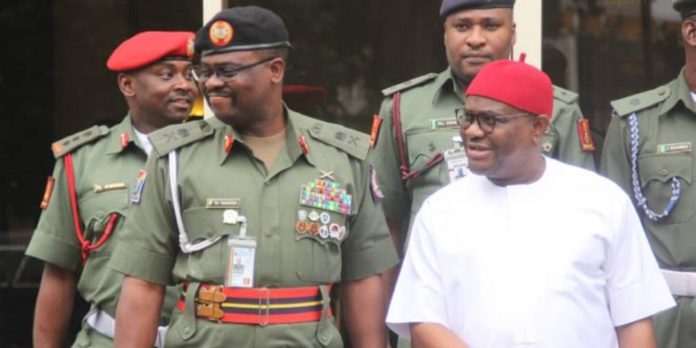 Gov. Nyesom Wike of Rivers has called for the institution of a reward system to encourage soldiers to put in their best for Nigeria.

He made the call during an inter-denominational Church Service marking the 2020 Armed Forces Remembrance Day Celebration at Saint Peter’s Anglican Church, Rumuepirikom on Sunday,

The Governor, who urged members of the armed forces to be professional, praised them for the roles they have played in preserving the unity of the country.

“But for them, kidnappers, cultists, insurgents and armed robbers would have taken over the country. I urge members of the Armed Forces to choose the right path in the interest of the country,’’ he said.

In a sermon, Venerable Samuel Chimele, called on soldiers to be professional in the discharge of their duties to the nation.

He said that soldiers who engage in unprofessional acts will go unrecognised in the long run, even when they enjoy earthly promotion.

The cleric urged the Nigerian armed forces to focus on providing security and defending the nation’s territorial integrity.

Chimele also warned soldiers against misuse of power against national interest, in the sermon with the theme, “Faithfulness in Service: The Hallmark of a True Soldier’’.

Prayers were said for the fallen heroes and God’s blessing upon their families, the Government and people of Rivers, the Federal Government and the Armed Forces.