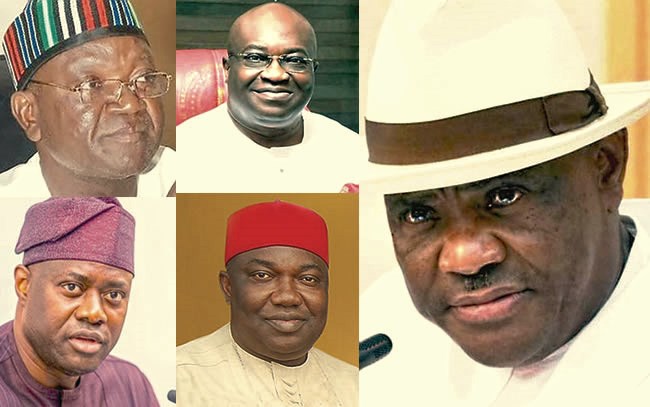 The twists and folds associated with the upcoming 2023 presidential election of February 25, 2023 may have yet to begin to unfold to the full glare of the general Nigerian public.

This is as misinformation recently filled the media airwaves concerning the G-5 group’s supposed endorsement of one of the presidential candidate. It was reported earlier through this news medium that the group of five Governors had endorsed the Peoples Democratic Party [PDP] presidential candidate, Abubakar Atiku as their preferred candidate to win the election. But the Governor of Benue State, Samuel Ortom – a member of the G-5 – refuted the report through a press statement indicating the G-5 had not endorsed Abubakar Atiku.

However, information available to 247ureports.com obtained from a consortium of competent sources point to a ‘divided’ G-5 group as behind the reason for the flare of misinformation.

“They are in a stalemate now” said a source who claims to have first-hand knowledge of the goings on within the G-5.

Persistent pressure from the Abubakar Atiku presidential team levelled against the G-5 within the last 8days is said to have been ‘tsusami-like’ in nature. “It came from all angles” said our source who explained that the continued geometric grown in popularity of the Labor party presidential candidate into areas and/or regions where the PDP had historically dominated – such areas as the South East, South South and North Central geo political zones – has turned the desperation up to a higher notch. The monumental task of reaching out to the G-5 was primarily reassigned to the Governor of Akwa Ibom, Udom Gabriel Emmanuel. The tasked was simply to “do all that is required” to get the G-5 to publicly endorse the PDP candidate.

Through this, Gov Udom made countless efforts, and held several closed door meetings with the G-5 – individually and in group. “He did everything he could’ but some of the members of the G-5 particularly the Benue State Governor was unwavering in his refusal to change his support from Peter Obi to Abubakar Atiku. Gov Udom, however, could not deliver on the first demand of the G-5 – which was for the PDP national chairman to resign. Atiku and the PDP could not get around to agreeing for the PDP national chairman to resign.

On Gov Nyesom Wike’s part, according to our source, he wants an undivided G-5. “Wike will go with any presidential candidate as long as its unison and agreed upon by the remainder of the four governors”. Nyesom Wike would prefer the G-5 remain mute as to whom there preferred candidate is – rather than present themselves as divided.

The G-5 had paid a visit to one of the former presidents of Nigeria in the person of Chief Olusegun Obasanjo at his home. The meeting was held behind closed doors. 247ureports.com is not certain of the content of what was discussed but credible but unverified information revealed that former President Olusegun Obasanjo impressed on the G-5 the need to under what Nigeria is presently undergoing and the danger that awaits Nigeria should the G-5 help elect either the APC or the PDP presidential candidate. According to our source, Obasanjo told them emphatically, “it will break Nigeria.”

The source added that the APC presidential candidate – Bola Tinubu was never considered as a serious choice by the G-5.