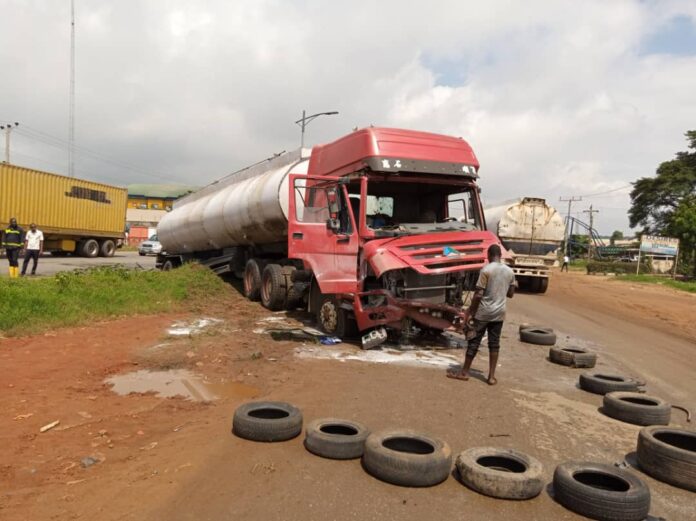 The Federal Road Safety Corps, Anambra State Command has assured that the men and officers of the Command and other sister agencies are currently on ground to ensure the safety of the road and easy flow of traffic at that the Eze-Uzu Junction of the Enugu-Onitsha Expressway in Awka, where a tanker laden with diesel crashed this morning and spilled its contents.

In a telephone interview to ascertain the traffic situation in the area, the Spokesperson of the Command, RC Margaret Onabe explained that there’s free vehicular and human movement on the two lanes of the road, though somewhat slower than usual, as their officers are doing their best to control the traffic on the ever-busy road.

She also revealed the men and officers of the Anambra State Fire Service are equally on ground and currently at work to dilute the spilling diesel from the tanker to make it incombustible and prevent avert any fire-related danger or hazard emanating from the area.

While attributing the crash to a brake failure, she explained that the tanker driver, who was coming from Onitsha en route Enugu, did his best to avert the would-have-been danger and fatality that would have resulted from crash, by diverting the vehicle to towards gutter and using a street light pole to wage it, thereby avoiding crashing into a long queue of traffic at the front while battling the bake failure.

RC Onabe also added that they had cordoned off some parts of the road to prevent vehicles going close to the crashed tanker, as officers of the Command are also on duty to ensure free flow of traffic in the area and along the two lanes of the road.

She finally revealed that they are currently waiting for another tanker to trans-load the diesel from the crashed tanker.