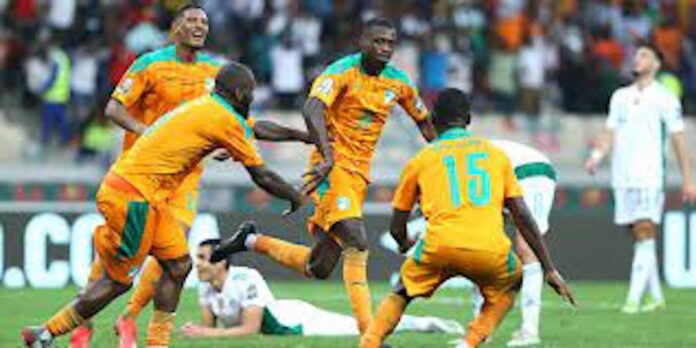 Cote d’Ivoire on Thursday extracted some revenge by beating Algeria 3-1 to finish top of Group E and eliminate the title-holders from the 2021 Africa Cup of Nations (AFCON).

The Elephants produced a dominant performance in Douala to sink the reigning champions with goals from Franck Yannick Kessie, Ibrahim Sangare and Nicolas Pepe.

The Desert Foxes who beat the Ivorians after penalty kicks in the quarter-finals of the 2019 competition in Egypt reduced the deficit 17 minutes through substitute Soufiane Bendebka.

Algeria also saw Aissa Mandi latching on to a quickly-taken Ismael Bennacer free-kick, only for Simon Desire to clear for a corner-kick.

The Elephants continued to counter the Desert Foxes with their wide players giving them width as they pushed for the breakthrough.

Kessie broke the deadlock with a clinical strike after an exchange of passes with Pepe to beat Rais Mbolhi and give Cote d’Ivoire the lead in the 22nd minute.

Djamel Belmadi’s side responded with chances of their own as they pushed for the equaliser.

Bennacer had a shot flashed the Elephants goal while Belaili failed to connect to Atal’s inviting diagonal pass into the area.

Ibrahim Sangare doubled the lead for the Elephants with a thumping header past Mbolhi five minutes before the break.

Cote d’Ivoire continued to dominate the second half and they found the third goal in the 53rd minute through Pepe.

The winger drifted inside from the right to curl his left-footed strike past Mbolhi to make it 3-0.

Algeria were awarded a penalty kick following a foul on Belaili in the 57th minute, but Mahrez struck the post for Cote d’Ivoire to hang on to their three-goal advantage.

Substitute Soufiane Bendebka later pulled a goal back for the Desert Foxes but it was too late for the 2019 African champions.

The victory confirmed top spot for Cote d’Ivoire ahead of Equatorial Guinea who beat Sierra Leone 1-0 in Limbé to finish second.

The Leone Stars finished third with two points and Algeria were bottom with a point.