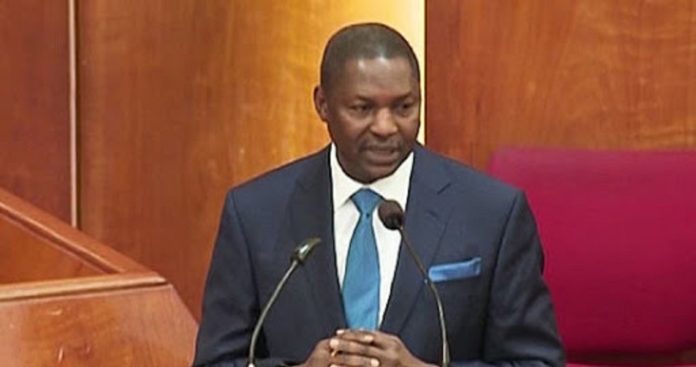 1.      Like all Nigerians, the people and government of Anambra State are appalled at the statement ascribed to the Minister of Justice and Attorney General of the Federation, Abubakar Malami, SAN, that the Federal Government will impose a state of emergency on Anambra State if the new spate of violence in Anambra State persists during the November 6 gubernatorial election in the state. The declaration is a strong indictment of President Muhammadu Buhari, the Commander in Chief of the Armed Forces. As the country’s Chief Security Officer, President Buhari is in charge of the Nigeria Police Force, State Security Service and Nigeria Security and  Civil Defence Corps but has confirmed the worst fear of the Nigerian people that politicians outside Anambra State in collaboration with their local minions are behind the recent spate of killings in the state to frighten people from coming out to vote in the forthcoming polls, thereby enabling them to write the results they like.

2.      It seems that since these politicians have proved unable to intimidate the Anambra people from coming out to participate in the vote, they have resolved to impose emergency rule on the state. Not up to 15 persons have lost their lives since the new spectre of violence in the state. For a state that has for the past seven years enjoyed the well-deserved reputation of being Nigeria’s safest and most peaceful state, this number is pretty high.

3.      But it is absolutely not even a fraction of the casualties the nation has seen in places like Borno, Zamfara, Katsina, Benue, Plateau, Yobe, Niger, Adamawa, Taraba, and others where terrorists have not only killed several thousands of civilians but also successfully attacked military formations and slaughtered soldiers and other security officers. They have even brought down some sophisticated combat aircraft. Were elections not held successfully in these states in 2019?

4.      Is the number of victims of the politically motivated violence in Anambra State anything near what the nation has seen even in such states as Imo and Ebonyi controlled by the ruling All Progressives Congress (APC)?  Why hasn’t Malami considered a state of emergency in these APC-controlled states?

5.      No further evidence is required to demonstrate that certain ominous political developments in Anambra State were contrived by a coterie of elements to ruin the November 6 polls so that they could have an opportunity to impose their lapdog on the state as the governor. They include the strange and surreptitious filing of a case over the outcome of the All Progressives Grand Alliance (APGA) congress last June 23 in Anambra State at the Jigawa State High Court sitting in Birnin Kudu and the bizarre jurisdiction which Justice Ubale assumed over the case. They also include the criminal summons which a customary court in Abuja issued on Professor Chukwuma Charles Soludo, the eminently successful former Central Bank of Nigeria governor and the APGA gubernatorial candidate in the November 6 vote. Nigerians are satisfied that both the Court of Appeal and the Chief Justice  have discharged their duties professionally in correcting the misbehavior of the courts of first instance. The judiciary frequently proves in the end to be truly a temple of justice.

6.      It is certain that the Federal Attorney General and Minister of Justice threatened emergency rule a few hours ago out of extreme frustration. Tomorrow is the deadline for the Independent National Electoral Commission (INEC) to publish the final list of candidates participating in the election. Having proved incapable of subduing APGA and removing Professor Soludo as the APGA candidate, vested interests are resorting to the idea of emergency rule, through which they hope to capture Anambra State by all means and impose their lackey on a great, successful, robust and independent-minded people.

7.      It is axiomatic that the incessant change of police commissioners in the state may not be a mere happenstance. Anambra is having its fifth Commissioner of Police in six months. The high turnover of police chiefs does not make for stability and continuity. Yet, the Federal Attorney General has the temerity to blame the State Government for the recent loss of lives in our beloved state.

8.      All Nigerians are perplexed at the determination of an infinitesimal clique of politicians to conquer Igbo people and make the Southeast a vassal state. They want to impose on us those the great Professor Chinua Achebe famously described as renegades who are committed to make Anambra a bankrupt and lawless fiefdom. Anambra State, having made huge progress in recent years, cannot go back to the Dark Ages. Senator Chris Ngige, OON, a worthy former governor of this state who is currently the Minister of Labour and Employment, is right to state that the November 6 election in Anambra State provides a historic choice for the people to choose between eternal slavery and perpetual freedom. We have unequivocally chosen freedom for ever.

Commissioner for Information and Public Enlightenment.