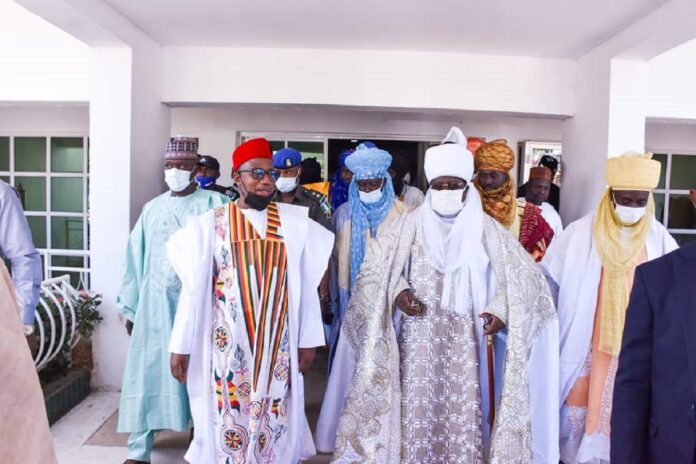 Bauchi State Governor Senayor Bala Mohammed  Abdulkadir  has advised  the six emirs in the state to be extra vigilant and ensure the discipline of youths in order to prevent banditry, kidnapping, rape and other violent crimes from thriving in the state,and pledged to address  the problems associated  with the payments of workers salaries.

Governor Bala  said this when he received the emir of Bauchi and who doubles as the Chairman of the State Council of Emirs, Alhaji Rilwanu Suleiman Adamu, paid him a Sallah homage at Government House, Bauchi, on Wednesday, as part of the Eid el-Kabir celebration.

On the current insecurity in the country, the governor said: ‘I want to appeal to you (emir) as the Chairman of the emirs in the state to ensure that we must discipline the youth in order to obtain sustainable peace and development in the state. Our desire is to live in peace but a lot of unpleasant things are happening in our country now. The issue of rape, kidnapping among other violent crimes boils down to indiscipline among the youth.’

Governor Bala expressed happiness  that Bauchi was ranked one of the most peaceful states in the country under his watch, charging traditional rulers in the state to continue to support the administration to sustain the peace.

The governor, who thanked the Emir of Bauchi and his council for the visit, explained that the current peace being enjoyed by residents in the state was not entirely the making of his administration.

He attributed the peace in the state to God and the unflinching support of traditional rulers and religious leaders in the state,and appreciated the support given to his administration by the traditional institution in the state in its bid to ensure that the dividends of democracy reached the common man.
He used the occasion to appreciate the efforts of President Muhammadu Buhari, state governors, traditional rulers,  security agencies and other stakeholders for their efforts to tackle insecurity.
Governor Bala assured the Emir that he had not forgotten his promise to present official cars to all district heads in the state, the delay was because he is following everything steps by steps.
He assured Civil servants his readiness to pay their salaries and allowances  as and when due

The emir of Bauchi Alhaji Rilwanu Suleimanu Adamu said he was at Government House with district heads and other traditional title holders to pay traditional Sallah homage to the governor.
Emir Rilwanu was in company with Alhaji Bello Kirfi, the Wazirin Bauchi Sarkin Yakin Bauchi Alhaji Ali Yakubu Lame among other top members of the Bauchi emirate council including Senators Bala Kariya, Adamu Jumba.

He said the visit would afford the emirate the opportunity to express gratitude to Governor Mohammed for the people-oriented projects he has executed since he assumed office as governor two years ago.

The emir expressed gratitude to Governor Bala Mohammed for putting an end to the decades of lingering water scarcity in Bauchi Metropolis.

He said there were roads that became death traps ‘but most of them have been constructed within Bauchi and other parts of the state.’

He described the governor as a leader with empathy who has always responded promptly to put smiles on the faces of victims of fire, flood and other disasters, particularly traders at Wunti, central markets among others

The emir, who enumerated other achievements of Governor Mohammed in two years, stated that ‘our prayer is that God will continue to help you to surpass what you have done for the people of the state so far.

‘We are also grateful for the support you have been giving traditional institutions since you came into office.

‘I assure you that on behalf of the council of emirs in the state, we are ready to support you anytime we are called upon in terms of advice on how to move the state forward,’ .