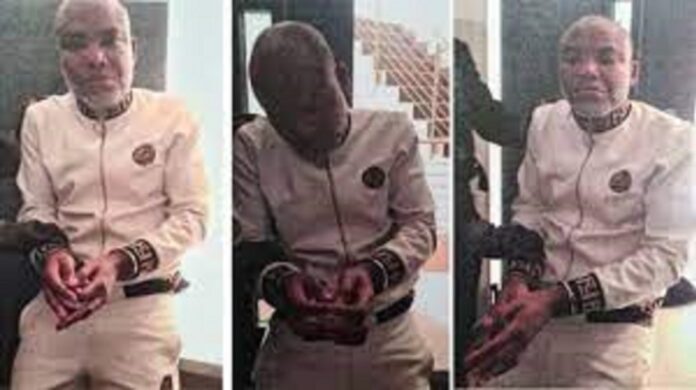 There was palpable fear within concerned circles that the leader of the Indigenous Peoples of Biafra [IPOB] Mazi Nnamdi Kanu may have been absent in Court on July 26, 2021 for reasons surrounding his health and/or griever uncertainties.

However, information available to 247ureports.com obtained from sources within the security architecture reveal the leader of IPOB is healthy and sound. He was brought to the High Court premises early by the operatives of Department of Security Services [DSS] in the morning of July 26.

“He was present at the court premises.”

The DSS operatives along with other security operators overseeing the transportation of Nnamdi Kanu to the court were uncomfortable with the size of the crowd gathered near the court premises. The mood of the crowd made them to recant their original mission to present him to the Court. They took the decision to not present him to the court and/or to the public. This move was to forestall any ugly situation.

“They brought him early, saw the crowd and the mood and took him back to avoid nasty incidents”. As a result, Nnamdi Kanu was not presented to the Court and to the public.

Many legal experts believe DSS’s action should have resulted to an immediate “unconditional release” of Nnamdi Kanu. Or, striking out the Charge. “But Kanu is high priority, so the Judge limited herself to a censure and warning”.

The Judge adjourned the case till October 21, 2021 – insisting on Nnamdi Kanu’s appearance.

As gathered, the leader of the IPOB seemed in good spirit and alert – and not weak as when he was abducted and deported to Nigeria. “He was looking forward to his appearance in court”.

Meanwhile, the solidarity towards Nnamdi Kanu’s plight continues to grow internationally and locally. There were protests and rallies in all the major cities globally including the USA, UK, Germany, France, Spain, Brazil, Argentina, Canada, Mexico, Russia, Israel, Austria, Malaysia, South Africa, Kenya and more. Locally, the major markets in South East were shut – and movement restricted.