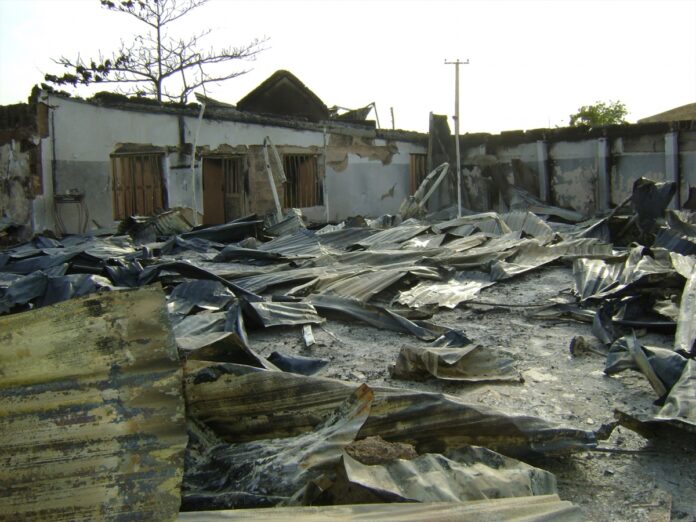 : It brings ‘healing and hope’

Agatu Methodist Church re-opened its doors on Easter Sunday, five years after it was destroyed by Fulani herdsmen in the Benue state of Nigeria on April 4, 2021.

Five years after Fulani herdsmen destroyed a Nigerian church in a raid that killed hundreds, an American pastor and attorney helped rebuild the church in time for Easter Sunday, which brought “hope and healing in the midst of a very murderous regime.”

The two men helped raise funds to rebuild the community’s destroyed Methodist church after a tragedy struck five years ago.

“Healing and hope: those are two great words that we’ve seen in a very practical way,” Devlin, the missions pastor at Infinity Bible Church in the Bronx, told The Christian Post in an interview.

In October 2020, Devlin visited Agatu and promised the church members that “by faith and by God’s grace and with hope in the Lord Jesus, the church will be completely finished by March 25, and then we will be in the finished church by Resurrection Day Sunday services [on April 4].”

“And we’re going to have a great celebration,” Devlin recalled telling the Agatu community at the time.

When he visited in October, Devlin said there were goats eating grass in the ruins of the church building where worshipers still met under a canopy of grass to protect them from the sun.

“I looked in [the church] and I saw the goats eating the grass, and I was like, ‘what is this?’ And it just touched my heart. …,” he said. “For the past five years, the church has just struggled along.”

Devlin returned to the U.S. to raise the $30,000 needed for the reconstruction.

Within a few days, half of the money was raised.

He returned to Nigeria multiple times. And in December, work on the church began with the help of local laborers who re-constructed the church using the materials Devlin raised money to purchase, which stimulated the local economy, he said.

“Our hope is, as we raise money rebuilding churches destroyed by terrorists that we’re going to use local materials and local labor. And then, it becomes an economic engine,” he explained. “We’re actually decreasing the unemployment rate in these areas as well. … It’s multi-faceted.”

The community began to brim with hope as the church building took shape, Devlin said.

As the construction continued, the congregation continued to multiply, and the excitement spilled over into the community, he continued.

Around 500 people gathered in the church — a building with a blue metal roof and yellow walls — on Easter Sunday for a service that lasted over five hours. According to Devlin, there was singing, dancing, worship, preaching, teaching and child dedications.

(Pastor William Devlin poses with worshipers at the reopened Agatu Methodist Church in Benue state, Nigeria, on April 4, 2021, five years after it was destroyed. | William Devlin)

“People were just so encouraged and so filled with hope that their church was completed. …,” he said. “I told the congregation, ‘I’m not even a Methodist, but I saw your tears. … And Revelation 21 says that God’s going to wipe away every tear when we meet with Him.’ I said, ‘I wanted to follow God’s lead, so I came to Agatu to wipe away the tears that you have shed over the people who were killed, over the homes that were destroyed, and over your church that was destroyed.’”

He said the community invited Benue State Gov. Samuel Ortom, a Methodist bishop, and the local city council to the inaugural service. Ortom, who recently survived an assassination attempt, did not attend. But he sent a representative who promised financial investment in the community.

Joseph Odaudu, Ortom’s adviser on special duties, visited the service and commended the congregation for embracing peace despite the destruction, The Independent reported.

“There was just a sense of goodwill, of hope, in the midst of all the persecution of our sisters and brothers in Nigeria. There was an injection of hope, of love,” Devlin said. “It was really a message of hope that we wanted to give to our persecuted Nigerian friends.”

He said raising funds to rebuild the church showed Nigeria the persecuted church is not forgotten.

“It’s something practical that we were not only able to provide to the glory of God … and bring hope and healing in the midst of a very murderous regime, but it also gives hope to people here in the U.S. [who are willing to give].”

Last year, The Christian Post interviewed Agatu residents and humanitarian workers about the help the community has received in the wake of Fulani attacks that overran 10 of Agatu’s 17 villages in 2016. Conflict with Fulani left about 60% of the region’s residents displaced, according to the Agatu Resource & Innovation Centre.

Throughout the country’s Middle Belt states, communal conflict has led to frequent attacks against predominantly Christian farming communities commonly carried out by radicalized Fulani herdsmen. Human rights groups estimate that hundreds of people were killed by Fulani attacks in 2020.

Nigeria is Africa’s most populous country and ranks No. 9 on Open Door’s World Watch List for Christian persecution worldwide due to an “extreme” level of Islamic oppression.

Open Doors reports that “[m]ore Christians are murdered for their faith in Nigeria than in any other country.”

The Global Terrorism Index ranked Nigeria as the third-most affected country by terrorism and reports over 22,000 killed by acts of terror from 2001 to 2019.

The U.S. Commission on International and Religious Freedom’s 2021 report warned Nigeria “will move relentlessly toward a Christian genocide” if action is not taken. Islamic extremism in northeast Nigeria has also led to thousands of deaths and millions displaced in recent years.

Nigeria was the first democratic nation to be added to the U.S. State Department’s list of “countries of particular concern” under the International Religious Freedom Act for engaging in “tolerated systematic, ongoing and egregious violations of religious freedom.”

As for his future of rebuilding destroyed churches, Devlin said there are still several churches in Nigeria in need of rebuilding.