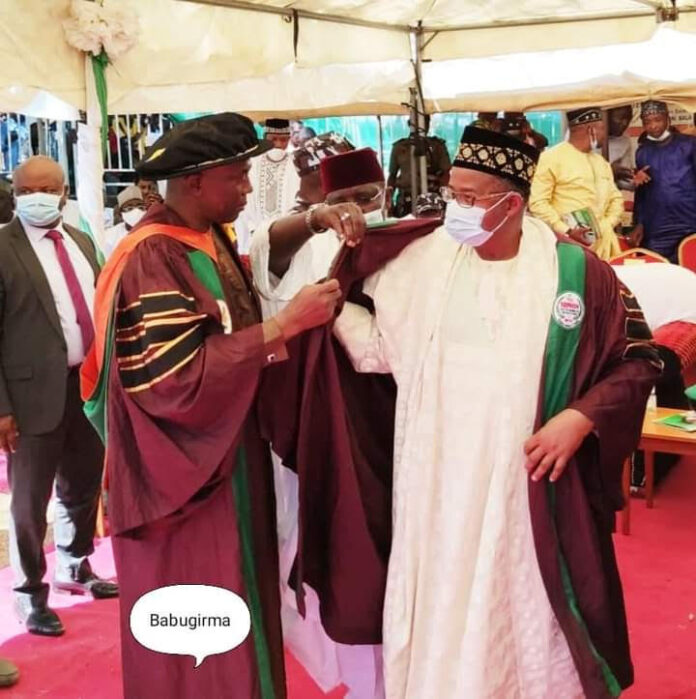 Bauchi State Governor Senator Bala Mohammed  Abdulkadir of  has won an award for the Cleanest Governor in the North East subregion.

The award was presented to him by Clean Up Nigeria, a Canadian based Non – Governmemtal Organization for his tireless efforts to promote a clean environment.

The 15 man study group that nominated the governor,  is led by Professor Solomon Balogun, an Environmental scholar from the University of Wisconsin, Madison.

Presenting the award at a ceremony held at Bauchi State Environmental Protection Agency (BASEPA), on Monday, Balogun said the organisation has over 500 awards to present globally for 2019 previous ratings on cleaniness.

The study group engages in year round physical verification of the cleaniness index using established indexes.

The environment scholar said the indexes applied included cleaniness of the Streets, waste management, knowledge, attitude and practice of the people, vegetation control, and public opinion.

He said the award was given to Governor Mohammed to stimulate government’s interest in the issue of sanitation, waste management and public hygiene.

He hoped it would further spur government to opportunities provided to catalyse them into action in modernising waste management.

He said the platform also offers a platform to fight the over 25 diseases that emanate from poor sanitation including malaria.

He said the award by Clean Up Nigeria is to also see to it that people embrace healthy practices and attitude towards a clean environment.

Responding after receiving the award, Governor Mohammed said he was highly honoured to be so recognised.

Mohammed said the occasion of the award presentation was memorable and special to him as it also marked the commissioning of Environmental Science Laboratory at BASEPA.

“The laboratory will serve as a reference centre for testing the quality of core environmental components which includes water, air, soil and plant,” he said.

“The environment needs everything, it is the source of the air we breathe, the water we desperately need to survive, the food for our nourishment, the shelter that protects us, the clothes that protect our dignity and the energy that empowers us to do everything,” he said.

He reiterates that the environment remains a priority of his government and will do everything possible to safeguard and improve it.

He thanked Clean Up Nigeria for putting Bauchi State on the world  map by the award and promised to keep working hard to safeguard and protect the environment by living up to expectations.

“We are not taking your presence here and the award you have  given us for granted. By this award we will make sure we live up to expectations and keep doing our best to ensure that we meet the quality expected of us by this agency,” he said.