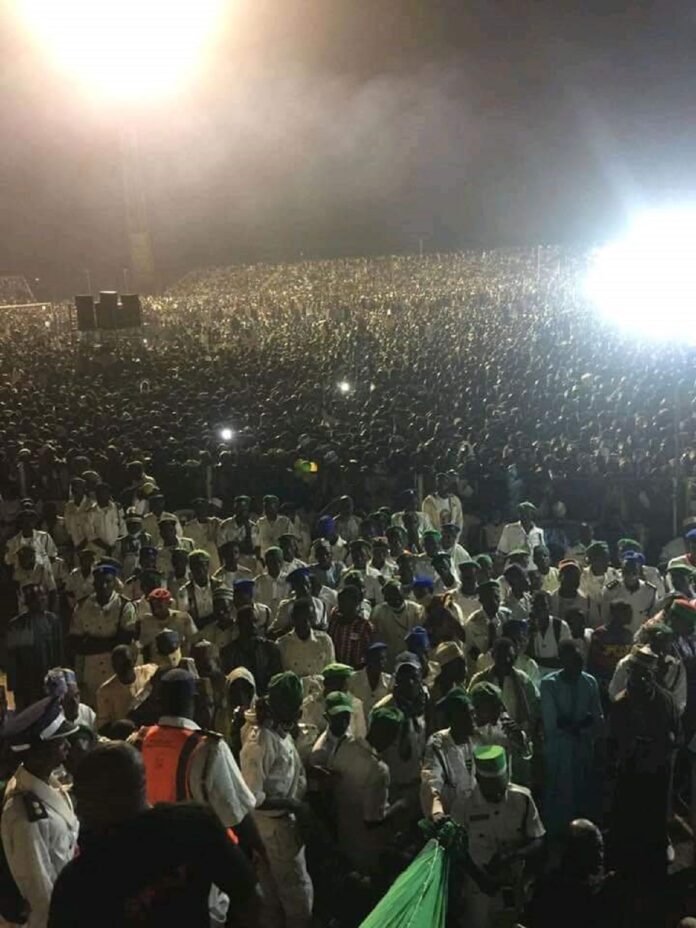 Muslims community in Bauchi State has celebrated this year eid el Maulud to commemorate the birthday of Prophet Mohammed Peace be Upon him peacefully.

A renown Islamic Scholar Sheikh Dahiru Usman Bauchi kicked up the celebration on Wednesday when he led thousands of Muslims at the Abubakar Tafawa Balewa Stadium Bauchi to celebrate the annual event.

Sheikh Dahiru recited the biography of the Holy prophet and advised Muslims to emulate his qualities.

He wishes all muslims all over the world happy maulud nniversary 1442. A.H.and explained that this year’s maulud came with serious socio-economic challenges in Nigeria, and enjoys muslims to purify their hearts and increase our deeds towards our creator.

Sheikh, said it is with total Submission to Allah SWT tthrough recitation of Istigfar, dalutations to prophet Muhammad and glorifying the name of Allah so that to achieve sustainable peace and progress in the country.

The Scholar  expressed  concerned on the current turmoil bedeviling the country especially the #ENDSARS protests in some cities in the country which resulted to violence, destructions and killings.

He reminded Muslims  that Allah enjoys all Muslims to embrace peace and shun violence, affliction and unrest.

Sheikh said Allah created  us from single male and female (Adam and Eve) and made us into nations and tribes so that we may know one another. So, he enjoys us and advised nigerians to desist from all ethnic prejudice and hostilities.

its citizens, seek and adhere to advises from sincere quarters and stakeholders on the matter.

He said that it is an unwise decision to ignore the yearnings and aspirations of its citizens and allow any civil unrest to degenerate into chaos.

sheikh calls on the government to pay attention to the legitimate demands of its citizens and call on the citizens and protesters to shun all manners of social disturbances that may lead ttoanarchy and seek the path of dialogue on their demands.

He warned all citizens that protests and any civil unrest, destroys the relative peace enjoyed in the country.” the government has ears and at the same time eyes and it heard and sees what her citizen’s demands in terms of economic hardship, insecurity and unemployment. We want the government to follow the path of peace with her citizens and not to use force on its citizens, because a burning flame is never quenched with another flame, but with water “

In his message to the people of  the State Governor Bala Mohammed Abdulkadir of the State thanks Alkah for sparing our lives to witness this year’s Eid – el – Maulud Celebration when we commemorate the birth of the prophet of Islam ,  Muhammad ( peace be upon Him ) .

Governor said prophet Muhammad  ( PBUH ) lived a simple but exemplary life. Besides the divine revelations which he received and passed on to his followers , he also preached peace , honesty , patience , generosity , humility , sincerely , love for one another and the fear of God . It is these virtues that people , irrespective of their religious inclinations are enjoined to imbibe and to put into practice .

He” appeal for sober reflection and self – evaluation by all with a view to knowing how well we related with our creator and fellow human beings during the last one year and make amends where necessary” .

Governir Bala said Bauchi State and our country need peace more than ever before .  You are all living witnesses of the present demonstration and youth restiveness across the country against the excesses of the now disbanded Special Anti – Robbery Squad , of the Nigeria Police Force , SARS . The protest was high jacked by the hoodlums which escalated into outright violence . Unsuspecting members of the public were needlessly attacked , shops were looted and public properties vandalized . At a time like this , I , urge all Muslims to pray for peace to prevail .”

He advised  the people of the State to bury their ethnic , religious , regional or political differences and continue to live in peace and harmony with one another .