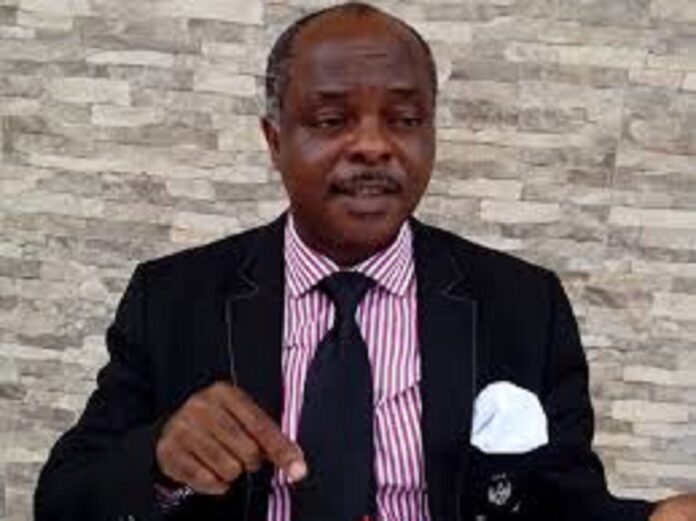 The leadership of Obudi Agwa Autonomous Community in Oguta Local Government Area of Imo State, has raised the alarm that the Attorney General and Commissioner for Justice, Barr. C.O.C. Akolisa, is allegedly instigating crisis in their community by the actions he has allegedly taken of recent.

Speaking with journalists in Owerri on  Wednesday, the community leaders wondered why the Attorny  General whom they hold in high and who has made a name for himself in the legal profession should decend so low as to begin to instigate crisis in the community, of which he is not a member.

According to Chief Leonard Okenesi, the President General of the community, Obudi Agwa Autonomous Community does not have any problems with the state government which Barr Akolisa serves as Attorney General and Commissioner for Justice, adding that what the Attorney General is reportedly doing is unbecoming and condescending.

The President General said that Barr Akilosa appears to be working with the group of people who are causing crisis in the community, noting that this action has heightened tension and insecurity in the community. He alleged that the traditional ruler of the community, Eze I.O. Asor, and his group at every point drop the name of the Attorney General and boass that with him by their side they could do anything and go scotfree.

Chief Okenesi further alleged that since the group started boasting with the name of the Attorney General, insecurity has been on the increase, alleging that a group of young men now exists in the community who go about threatening, maiming and whisking people away from their homes for no just cause. He alleged  that since the group whisked away the Youth President of the Community, Comrade Anayo Obodo, and beat him to coma, many people have fled the community for fear of being maimed, especially as the group constantly drops the name of the Attorny General.

“We did not believe that the Attorney General and Commissioner for Justice, Barr. C.O.C. Akolisa, could be behind the people doing those criminal things. We believed he was too decent for such things. But a few things happened that forced us to begin to ask questions. The first thing that happened is that the Eze attempted to unilaterally dissolve the Town Union in the community by appointing a parallel Town Union executive for the community, after the IMC Chairman of Oguta Local Government Area appointed me as the President General of the Town Union and inaugurated me alongside others at the Council Secretariat. When he did this he said he had instructions from the Attorney General and Commissioner for Justice.

“We have reported what is happening in our community to the DSS and police, but despite what the security agencies are doing these people do not want to turn a new leaf, because they claim the Attorney General is behind them. So much has happened in our community, including murders, while many have been on exile for over a decade. We have tried our best to make peace but it appears that no matter what we do this people who claim to have the backing of the Attorney General won’t let us have peace”, said Chief Okensi.

Chief Okenesi said that another reason they believe the Attorney General may be behind those troubling the community was the recent letter from the Attorney General removing the Councillor for Obudi-Aro Ward, Hon. Johnbosco Mgbojiso Iwunze, and replaced him with Eze Asor’s cousin, Mr. Justine Eze Asor, “whereas Hon. Iwunze was among those earlier appointed by the Governor and inaugurated alongside other councillors. This latest action purporting to remove Hon. Iwunze is heightening the tension in the community. We wonder why the Attorny General would take this kind of action, when there is a Special Adviser to the Governor on Local Government and Chieftaincy Affairs”, said the PG.

Lending his voice, the Secretary of the Town Union, Prince Okorie Douglas Celestine, noted that “ordinarily our community would have no reason to accuse the Attorney General, but when things begin to unfold and appear to have his imprimatur, we have no other option than to ask questions”.

Prince Okorie noted: “My family has a case with the Eze in court in suit number HOG/8c/2020 (The State v Nneji & 3 ors), but shockingly, the State Prosecutor announced in court recently that the Attorney General and Commissioner of Justice requested the case file and he obliged him. Since then the case has been stalled and this emboldened the Eze and his group. Since that time we have not known peace. The caee is coming up again on October 11, 2020. We are not sure the Attorney General could do that kind of thing to scuttle justice. He should prove the State prosecutor wrong, because taking such action is tantamount to denying us justice, which we think the Attorney General will not do.”

“We really don’t believe something of these claims, but instead of backing people to foment trouble in our community, we urge the Attorney General to change his unusual interest in the affairs of our community to genuine love by using his good offices to attract development to our  community and allow us live in peace.