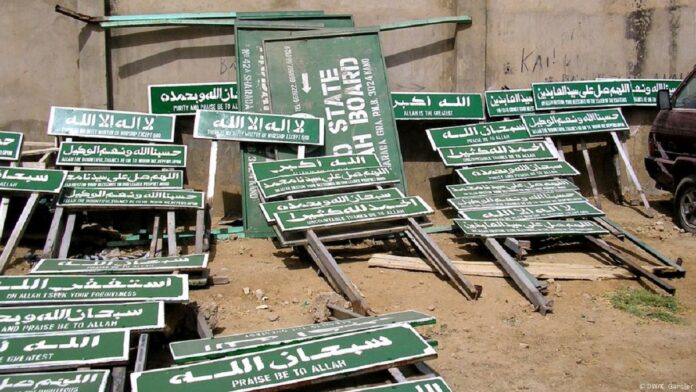 An Igbo Group, Voice  from the East, VEAST, has called for  the  cancellation of  sharia law  in Nigeria, saying that  it is “murderous and an  islamic  expansionist  agenda.”

The  group made the call in a press statement  issued to  journalists in Enugu  , after  their  adhoc  meeting on the  death sentence passed on one  Yahaya Sharif Aminu, a tijaniya  islamic sect in Kano.

The statement signed by the Convener of  VEAST, Comrade Kindness Jonah noted that because Sharia was evil, that was why Mrs. Bridget Agbahime , an Igbo woman in Wambai Market was killed in Kano in 2016 for  the “satanic flimsy excuse  of speaking against  islamic Prophet Mohamed.”

The group  lamented the  scenario in islamized Nigeria where  the  constitution is demonically tainted with Sharia which breeds  callous  death  sentences for  the unreasonable excuse of  blasphemy.

The group  wondered what blasphemy was doing  in the constitution of  a  nation said  to be  a  secular  state.

“It is an aberration to implement Sharia Code in a  secular state  as started in 1999 by the  then Governor of  Zamfara State,  a   fiendish  tonic  needed by  some disgruntled muslims  to unleash  callous  death sentences to people they  can accuse  of  speaking against  their  prophet Mohammed.”

The  group maintained that sharia remains an  anti democracy and  anti  modernity, and  so archaic that  no meaningful person or  nation can ever fathom the  satanic  idiocy enshrined  in its  implementation.

Jonah noted with all  fierce anger that  the  condemnation of  Sharif  Yahaya Aminu, a  musician  in Kano by  an upper sharia court in the Hausawa Filin Hockey area of the State  for  speaking against  islamic  prophet Mohammed , is  the worst  verbalization of  man’s   inhumanity to man.

He queried how a said  prophet  would  command  his  followers  to  be  fighting for  him  when he is  perceived to be  so powerful that  his  is  credited to be  the prophet of  a  god.

According to  Comrade Kindness Jonah, “the founder of any  religion should  be  strong enough to  fight  for  himself  in any case of  abuse of  his  name  by anybody at that. Otherwise, such a  prophet is a  weakling, and so,  he is  not  worthy of  any  followership.”

Jonah said ‘‘‘ Mohamed fought  many battles while  on earth and  killed many millions  of  people and  conquered many nations  in forceful conversion to  his religion. He is  certainly very strong, and  too powerful  enough to fight for  and  defend  himself  in any case of  abuse of  his  name  by anybody. So, modern Nigeria  cannot afford  this  callous  waste  of  lives  by sharialized  condemnations  by sharia  courts in  Northern Nigeria.

“Enough of  this  madness  and  murderous  islamic code called  sharia in Nigeria. Enogh is  enough. Nigerians  should  rise up now and  mull on the  Federal Government  to  obliterate  this  satanic-demonic islamic code of  destruction and  death called  sharia  from Nigeria’s  constitution  right now before  it is  too late.”