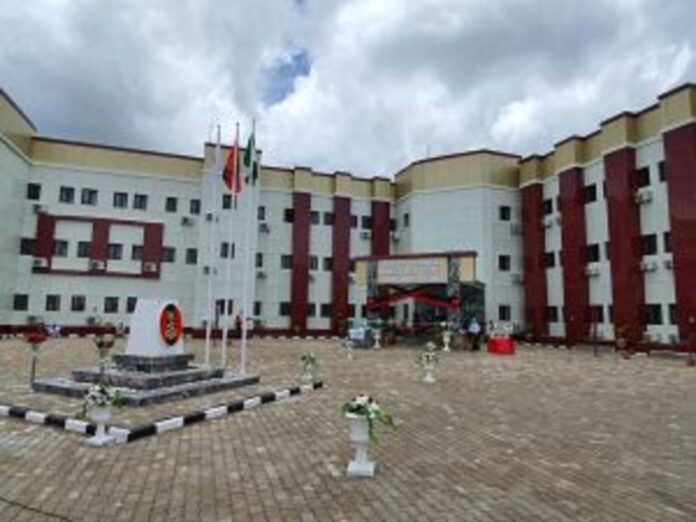 Gov. Babagana Zulum of Borno on Thursday inaugurated the Tukur Buratai Institute for War and Peace built as part of the concerted efforts to overcome the challenges of insurgency in the Northeast.

Speaking at the event, Zulum lauded the foresight of the Nigerian Army in building the institute, located in Buratai, Biu Local Government Area of the state.

He regretted that the insurgency had “inflicted debilitating impact” on the state and the neighbouring countries of Niger, Chad and Cameroon.

He said: “Our dear state is the worst affected with many citizens still in Internally Displaced Persons (IDPs) camps.

“I’m not unaware of where we were before the inception of the President Muhammadu Buhari’s administration and the successes recorded by the military in the war against terrorism.

“With the level of destruction of infrastructure and displacement of people from their communities, we have the task of rehabilitating them.

“The task before us now is to return the people to their communities and restart their means of livelihoods,” he said.

The governor said that it was for such reason that the state government was devoting its limited resources to empower and encourage the people to return to their communities.

“The army is a reliable partner in this endeavour,” he said, adding that the state government shall work with the institute to design a template and programmes for peace building, reconstruction and development of the communities.

He appreciated the sacrifices of gallant troops, saying, “We shall continue to support the Armed Forces.

“When we occasionally criticise them, we do so with a view to improving on our successes and not out of lack of appreciation.”

In a remark, The Chief of Army Staff (COAS), Lt.-Gen. Tukur Buratai, regretted that one of the greatest challenges facing the world today is terrorism with its huge toll on human lives.

Buratai said that Nigeria has had its fair share of terrorism in the form of Boko Haram insurgency in the northeast part of country.

He said that the military had been working substantially with the support of government and other security agencies to rout terrorism and return peace to the affected areas.

He said that the success of the troops would enable the IDPs to go back to their communities and resume their normal productive activities.

“This is the surest way to put in a nail on the coffins of insurgency,” he said.

He commended the troops for their sacrifices in defending their country, saying the Nigerian Army would continue to treat their welfare and families with topmost priority.

He commended the people of northeast for their continued support, pointing out that without their support and understanding, the successes achieved would not have been possible.

“Continue to support our security agencies with timely intelligence as the war on terror is a collective responsibility of all,” he said.

He said that the institute was part of Nigerian Army’s aim of understanding all forms of warfare, particularly new forms of asymmetric conflict, including terrorism and insurgency.

“The Tukur Buratai Institute aims at training and capacity building for military personnel as well as civilians in counter-terrorism and insurgency, humanitarian responses, peace building and construction.

The COAS said the institute had six centres, including research, documentation, counter-terrorism and insurgency, cyber security, strategic communication and centre for museum and archives.

In a speech, the Vice Chancellor (VC) of the Nigerian Army University, Biu, Prof. Kyari Mohammed, said the conversion of the museum to an Institute of War and Peace was part of army’s efforts of defeating the Boko Haram insurgency not only by kinetic force.

Mohammed said that in 2014, Buratai town was severally attacked by insurgents.

He opined that the institute would intellectually provide education, which the insurgents detested in their campaigns of war.

“Academicians intend to look for and proffer solutions to end the ongoing war with Boko Haram and abet future occurrences.

“The institute’s building was donated by Buratai in 2015 as a museum, where relics of war and insurgency were displayed.

“In 2019, the Nigerian Army decided to upgrade the museum to become a centre for counter-terrorism and insurgency,” Mohammed said.

According to him, this year, the University Council in its wisdom thought it necessary to upgrade the centre to an institute.

“It will deal with post-conflict peace building and reconstruction, disarmament, demobilisation and reintegration.

“The centre will also study other forms of conflict around the country and beyond.

“We aspire to be the centre of excellence in post-conflict peace building and proffering solutions to violent conflict,” the VC said.

He said the institute would be devoted to the study of all aspects of war and peace.

NAN report that the more than a decade-long Boko Haram insurgency has claimed at least 36,000 lives with the destruction of over $9 billion (N3.42 trillion) worth of property in Borno, Adamawa and Yobe states.