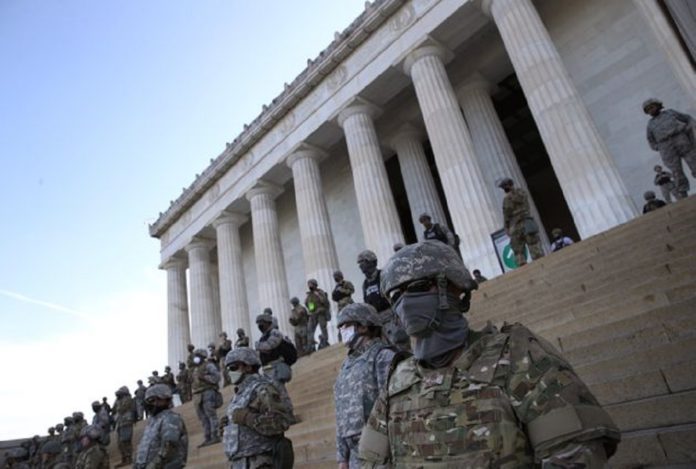 Protesters marched through Washington, D.C., on Tuesday night, despite facing the threat of violence from local and federal law enforcement officials and military police officers deployed by the Trump administration in an overwhelming show of force meant to stamp out demonstrations against police brutality and racism.

In downtown Washington, a new law enforcement agency or military vehicle was around every corner. Military police officers outfitted for a war zone lined up in front of the Lincoln Memorial. Attorney General William Barr promised “even greater law enforcement resources and support” in the District of Columbia on Tuesday, the day after he ordered law enforcement officers to use projectiles and pepper spray to clear protesters from a space near the White House so that President Donald Trump could walk to a nearby church to have his photo taken holding a Bible.

Members of the D.C. National Guard directed traffic, their Humvees stationed nearby. Department of Homeland Security police formed a line near the Veterans Affairs Building. Drug Enforcement Administration agents were posted on street corners. Uniformed members of the armed services sat in military vehicles near the National Museum of African American History and Culture. Border Patrol officers and U.S. Customs agents were stationed near the Ronald Reagan Building, and men who called themselves “assets of DOJ” or with “the federal government” were posted near the Justice Department and FBI building.

But thousands turned out anyway to bring attention to the death of George Floyd, a 46-year-old Black man killed last week by a Minneapolis police officer who knelt on his neck for nearly nine minutes, even as he pleaded that he could not breathe, and to the many, many other Black people killed by police. The protests weren’t suppressed, in spite of scare tactics.

Demonstrators streamed en masse toward downtown, some of them chanting Floyd’s name.

Two cyclists surveying the scene outfitted their bikes with signs that read “Black lives matter” and “White silence Is violence,” while onlookers snapped photos of graffiti of a dead pig on the front of the Department of Treasury Building and a building near the White House that was tagged with the phrases “Capitalism is murder” and “Why do we have to keep telling you Black lives matter.”

Members of the D.C. National Guard stand on the steps of the Lincoln Memorial as demonstrators participate in a peaceful protest against police brutality and the death of George Floyd. (Photo: Win McNamee via Getty Images)

Members of the D.C. National Guard stand on the steps of the Lincoln Memorial as demonstrators participate in a peaceful protest against police brutality and the death of George Floyd. (Photo: Win McNamee via Getty Images)

Protesters had reason to believe they could be hurt by law enforcement, even if their demonstrations remained peaceful. Across the country, law enforcement officials have responded violently to the protests against police brutality, pointing to instances of looting and rioting as justification to deploy tear gas and projectiles on peaceful demonstrators. Several mayors called in the National Guard to help police their cities and enforce curfews.

In Washington on Monday evening, Barr personally ordered law enforcement to crush a peaceful protest using chemical munitions ahead of a speech by Trump in which he vowed to send “thousands of heavily armed soldiers” into the nation’s capital and to deploy the military into other U.S. cities if their mayors did not crush protests against police brutality.

There were indications Tuesday could be even more dramatic, with a larger military and law enforcement presence in Washington. Plus, the Justice Department has authorized the Drug Enforcement Administration to “conduct covert surveillance” and investigate people participating in the protests, BuzzFeed News reported.

One demonstrator said the show of force in Washington made them suspicious and nervous. They were worried they would be trapped and arrested, just like protesters were on a residential street the night before.

Some demonstrators prepared for potential force: One group of young women walking in from north of the White House carried bags filled with milk and gauze to use to aid protesters hit by pepper spray or rubber bullets.

Trump’s show of force, intended to assert his power and intimidate protesters, has earned him plenty of pushback. Several governors have said they will not allow Trump to deploy troops to their states. Mike Mullen, former chairman of the Joint Chiefs of Staff, wrote on Tuesday that he was “sickened” to see members of the National Guard violently clear protesters and worried that “members of our military will be co-opted for political purposes.”

Washington’s Roman Catholic archbishop condemned Trump’s Tuesday visit to the St. John Paul II National Shrine, insisting that the former pope the shrine is named for “would not condone the use of tear gas and other deterrents to silence, scatter or intimidate” protesters.

Many Democrats and some Republicans have spoken out against the president’s response.

But it’s unclear who has the ability or willingness to stop the president’s authoritarian drift. Barr, Trump’s hand-picked attorney general, has pushed the Justice Department’s Office of Legal Counsel to back several of the president’s legally questionable moves. Some Democrats have vowed limited action: Sen. Tim Kaine (D-Va.) said he will offer an amendment to the National Defense Authorization Act barring use of military force against Americans. Sen. Elizabeth Warren (D-Mass.), who attended the protests in D.C. Tuesday evening, called for Barr to be impeached and said she is asking the inspector general for the Department of Defense to conduct an investigation “of the role of DoD civilian and military officials in the attack on peaceful protesters at the White House.”

But Republicans, who control the Senate, have either been silent or downplayed concerns about Trump’s response to protesters. Some GOP members of Congress said they wished he’d adjust his tone.

There were also some signs that the intense public pressure to address police brutality was having an effect. In Minnesota, where Floyd was killed, the state filed a human rights complaint against the Minneapolis Police Department, launching an investigation into whether the department has engaged in systematic racism. The school board in Minneapolis voted on Tuesday in favor of a resolution to cut ties with the police department.

Although most of the police brutality against protesters has gone unpunished, several police officers in Atlanta were charged with aggravated assault after violently removing students from their car with a stun gun.

In Los Angeles, Police Chief Michel Moore faced a flood of calls for him to step down or be fired after stating on Monday that Floyd’s death “is on [looters’] hands, as much as it is those officers” who participated in his death. Moore apologized later that day but during an online meeting of the city’s Police Commission on Tuesday, more than 500 people signed up to share public comment. They detailed LAPD’s aggressive use of tear gas and rubber bullets to attack peaceful protesters throughout the city.

“You have shown your true colors,” said David Spencer, one of the people who called into the meeting. “I am terrified of the LAPD now.”