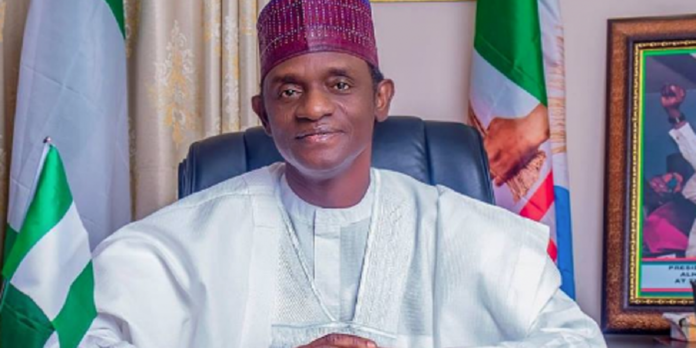 The All Progressives Congress (APC) has described as ignorant, a statement credited to the Peoples Democratic Party (PDP) questioning the constitution of Caretaker/Extra-ordinary National Convention Planning Committee, headed by governor Mai Mala Buni of Yobe state.
In a statement signed Sunday in Abuja by the APC’s deputy national publicity secretary, Yekini Nabena, said the opposition PDP was acting as if it understood the APC constitution more than its erudite framers.

Nabena said: “We would normally ignore the equally ignorant statement of the Peoples Democratic Party (PDP) on the 8th resumed meeting of the National Executive Committee (NEC) of the All Progressives Congress (APC) which constituted a Caretaker/Extra-ordinary National Convention Planning Committee in place of the dissolved National Working Committee (NWC) of the Party.
“But it is necessary to state the facts in line with provisions the APC Constitution because it seems the PDP understands the APC Constitution more than its erudite framers.

“The APC Constitution in Article 17 (iv) states: ‘No officer in any Organ of the Party shall hold executive position office in Government concurrently’
“Also, the Article 11 (A) of the Constitution provides:
“The Party shall have the following fourteen Organs: National Convention, Board of Trustees, National Executive Committee, National Working Committee, Zonal Committee, State Congress, State Executive Committee, State Working Committee, Senatorial District Committee, Local Government Area/ Area Council Congress, The Local Government Area/ Area Council, Executive Committee, the Ward Congress, the Ward Executive Committee and the Polling Unit Committee.”
APC therefore, stated that party constitution’s Article 17 (iv) “which the PDP and their hirelings have labored to stretch it’s language to the level of the absurd, made specific mention of any officer of the Party’s Organ and Article 11 (A) mentioned above has clearly defined the Organs of the Party.
“Therefore, the Caretaker Committee and Extra Ordinary Convention Committee which is headed by H.E. Governor Mai Mala Buni as Chairman, is not an Organ of the Party hence, their appointment is not in contravention of the Constitution of the All Progressives Congress.
“The APC Caretaker/Extra-ordinary National Convention Planning Committee is not different from several other committees that have been previously constituted of deserving party members and empowered to undertake assignments on behalf of the party. These committees include: screening, appeal, factfinding, reconciliation, primary election and many other committees that are routinely constituted.
“For the records, Article 13.3 (vi.) empowers the National Executive Committee (NEC) as the principal executive body of the party with powers to “create, elect and appoint any committee it may deem necessary, desirable or expedient and assign to them such powers and functions as it may seem fit and proper.”

While reacting to the holding of the APC NEC virtual meeting at the Presidential Villa, the APC spokesman said “there is no law that says the President cannot hold political meetings in the Presidential Villa.
“Also, on the propriety of the oath of office administered on the caretaker committee, the Attorney-General of the Federation and Minister of Justice, Abubakar Malami, SAN has rightly stated that being a lawyer, Notary Public and a Senior Advocate of Nigeria, there is no law that prohibits him from administering Oath.

“While we are not required to explain to the PDP our lawful internal processes, we find their interest curious and amusing. It is understandable that the PDP is not used to following its rules as enshrined in their constitution. The APC has not copied such ignominious and unlawful practices.”