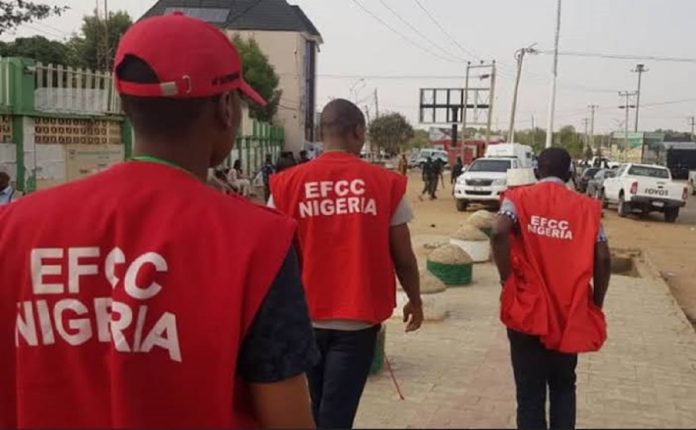 The Economic and Financial Crimes Commission, EFCC, has arraigned the deputy speaker of the Benue State House of Assembly, Mr Christopher Adaji, and Dr Torese Agena, Clerk of the House of Assembly, before  Justice S. O. Itodo of the Benue State High Court, Makurdi, for alleged complicity in fraudulent practices to the tune of N4.8 million and N200, 000 = respectively.

They were arraigned on charges bordering on conspiracy, bribe, criminal breach of trust and abuse of office which they pleaded not guilty to after it was read to them.

The charges against Mr Agena read thus :”That you, Torese Agena, on 18th day of October, 2019 being Clerk, Benue State House of Assembly, within the jurisdiction of this Honourable court, did use your position to confer unfair advantage to yourself as brbe, to the tune of N200, 000 (Two Hundred thousand naira only) from N50, 000, 000 (Fifty Million Naira) payable to High Profile Investment Nigeria Limited by the Benue State Government for the Benue State House of Assembly legislative tour to European countries, thereby committing an offence contrary to Section 19 of the Corrupt Practices and Other Related Offences Act, 2000 and punishable under the same Act”.

The charge against Adaji went thus : “That you Christopher Adaji between 8th – 14th of November, 2019 within the jurisdiction of this honourable court spent the sum of N4, 840, 950 (Four Million, Eight Hundred and Forty Thousand, Nine Hundred and Fifty Naira only) the funds allocated to you for European Legislative Tour on your legal and other services and thereby committed an offence contrary to Section 22(5) of the Independent Corrupt Practices and Other Related Offences Act, 2000”.

Upon their plea, counsel to the EFCC, G. G. Chia-Yakua, asked the court for a date to commence trial and sought an order of the court to remand the defendants in correctional centre.

However, counsel to the defendants, Chief S. T. Hon. SAN, prayed the court to move their bail orally and consequently urged the court to grant them bail on liberal terms or on self-recognition promising that they would always be available in court to stand their trial.

Justice Itodo, after listening to both counsels,  admitted them to bail on self-recognition.  Thereafter, the case was adjourned to July 6, 7, and 8, 2020 for trial.