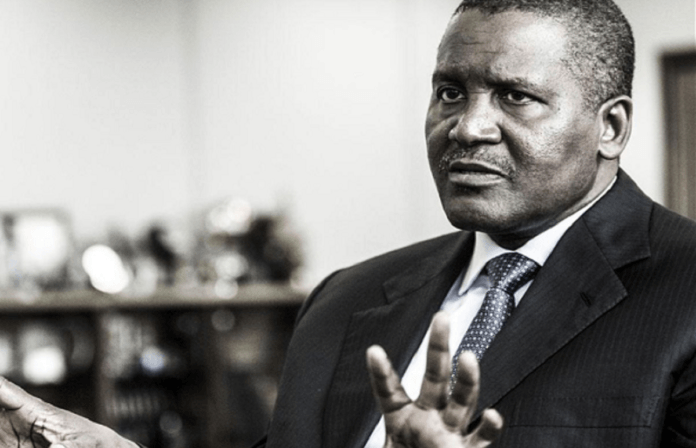 Africa’s richest man Aliko Dangote on Wednesday lost more than N240 billion in five hours as the effect of the coronavirus bit harder on the Stock Exchange.

The World Health Organisation (WHO) on Wednesday declared coronavirus a pandemic.

A pandemic is a disease that is spreading in multiple countries around the world at the same time.

Some of Dangote’s firms under the parent-company, Dangote Group, suffered big losses at the market.

Investors have suffered a total of N1.41 trillion loss in the last three days to the pandemic which is wreaking havoc across the world.

Benchmark equities indices indicated an average decline of 3.4 per cent on Weednesday, which is equivalent to net capital depreciation of N426 billion. The equities lost N985 billion between Monday and Tuesday.

Dangote Cement Plc, the flagship of Dangote Industries Limited (DIL), led the decline with the maximum daily allowable drop of 10 per cent or N17, which is equivalent to net depreciation of N289.68 billion. Dangote Cement is Nigeria’s most capitalised quoted company and accounts for more than 20 per cent of the total market capitalisation.

Allaying public fears about development in the market, the Association of Securities Dealing Houses of Nigeria (ASHON) assured investors that the market would soon bounce back.

It said the fundamentals of quoted companies remained strong.

ASHON chairman Chief Oyinyechukwu Ezeagu explained that the stock market remained part of the global exchanges and as such any development in the world market would impact on its operations.

Ezeagu said: “The effect of the coronavirus is gradually affecting trading all over the world and whatever happens elsewhere reflects in our market.

“The centre of it all is China and being a major world power both in productive and consumption capacities, any ill wind affecting China would naturally cause a big sneezing to the rest of world.

“Investors should not panic. The share prices will bounce back. The companies’ fundamentals remain strong. Many investors are taking advantage of the bearish run to beef up their portfolios.”

Coronavirus first hit Wuhan in China in December 2019. Over 3000 people have died of the pandemic in the country.

Since then, the pandemic has spread worldwide with countries in Europe mostly affected. About 125,000 cases have been reported worldwide with 4,605 dead. United States (U.S.) has 31 deaths and United Kingdom, eight.

Italy is the worst hit country in Europe with 827 deaths. Over 16 million people have been quarantined there.

France has suspended flights between it and Italy till April 3 because of the pandemic.

In Nigeria, two persons, including an Italian, who is the index case, are in quarantine in Lagos. Six others comprising four children, their teacher and another person are in isolation, according to Commissioner for Health Prof. Akin Abayomi.

At the Nigerian Stock Exchange (NSE), the All Share Index (ASI) – the benchmark value index that tracks all share prices declined from its opening index 24,388.66 points to close at 23,572.75 points.

The aggregate market value of all quoted equities at the NSE dropped from its opening value of N12.710 trillion to close at N12.284 trillion. Average year-to-date return crossed the double-digit -12.2 per cent. The ASI had opened Monday at 26,279.61 points while market capitalisation opened at N13.695 trillion.

“We maintain a bearish outlook on the equities market in the next trading session,” Afrinvest Securities stated.